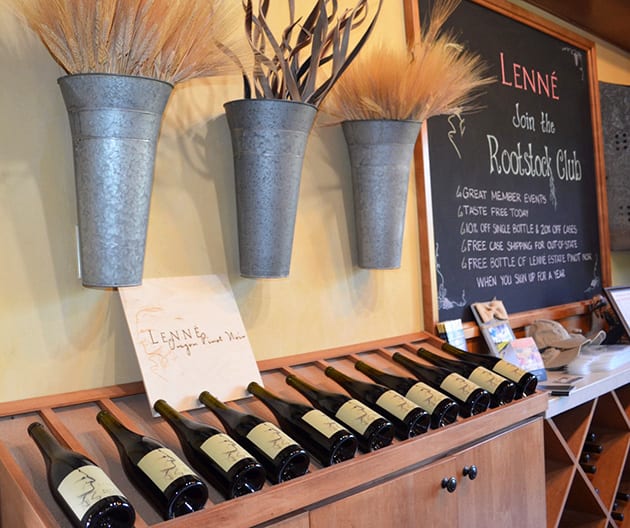 On a recent visit to the Willamette Valley, I got to visit a winery, Lenné Estate, that you might call an anomaly because of its terroir. The soils are peavine series, a soil that is moderately deep, well-drained, and forms in clayey colluvium and residuum derived from sandstone, siltstone, basalt, tuffaceous rock, and shale located near mountains but unusual for the Yamhill-Carlton AVA and Pinot country.

This soil gives Lenné’s grapes their own character compared to other vineyards in the Yamhill- Carlton AVA and, for that matter, the Willamette Valley. The flavor profile for these Pinot Noir grapes is dark fruit and mocha. After my first encounter with Lenné’s Pinot Noir, I commented to my family that I was drinking chocolate in a glass, which now looking back best describes and defines the Pinot Noir from Lenné Estate.

Chocolate in a glass may be the heart and soul of Lenné Estate wines, but it is owner Steve Lutz, that brings this character full circle with his minimalist approach to winemaking. Steve and his wife, Karen, purchased the 20.9-acre property in 2009. They planted the 1st stage of the vineyard in 2001 with Pommard, 777 and 115. After some trials and tribulations, including losing some of their vines the first year. By 2004 they also planted 667 and 114. By 2005 they were on their way to success. Today the south-facing slopes are dry-farmed, and the clones are vinified separately. The wine typically ages 11 months in 35% new French oak.

Steve was not a newcomer to the wine business after graduating from the University of Oregon. Although he began his career in the corporate world, he decided he needed a change and moved to Napa to work at Berringer, Franciscan, Inglenook, Vichon, and Merryvale in several different capacities but mostly managing tasting rooms. During that time, Steve made Pinot Noir from Carneros fruit. Steve went on to open a restaurant in Santa Rosa and later moved back to England, where Karen’s family lived. During that time, the dream of Oregon and wine was always present. His move back to Oregon brought him to Anne Amie Vineyards. Leaving Anne Amie, the rest is history.

Everyone wonders how Lenné got its name. The winery pays tribute to Steve’s father-in-law, Len, who helped Steve and Karen purchase the property. Each label also acknowledges Len. Three distinct labels represent the estate-grown wines of Lenné Estate. LeNez, which means nose and perhaps signifies the mocha aromas we find on the nose, and the wine that contains all five clones on the property. Lenné Estate Pinot Noir represents barrel selections from the finest parts of the vineyard consisting of Pommard and 114. Finally, Cinq Élus signifies the wine made from the finest barrels from each of Lenné’s five clones.

The Lenné Estate also grows Chardonnay. Now in its third going on its 4th year the ages 9 – 11 months in barrel followed by eight months in stainless steel.

2017 Chardonnay: I found a bright, refreshing Chardonnay with flavors of pear and a slight creaminess in the midpalate.

2017 Scarlet’s Reserve: The mixture of aging in barrels followed by stainless steel gives the wine its creamy qualities. Discover flavors of lemon and pear.

2015 LeNez Pinot Noir represents a wine created from the entire Yamhill estate vineyards utilizing all five clones. It blends clones 777, 115, 114, 667 and Pommard. The wine’s smooth balance shows its red fruit, tart, and sour cherry and cola flavors. A bit fruit-forward, the aromas of mocha prevail. I found a pleasant sweetness on the finish.

2014 Lenné Pinot Noir: This wine exhibits flavors of raspberry and cherry in a fruit-forward manner.

2016 Lenné Pinot Noir: This wine shows the growth and maturity of Lenné wines. The subtle nuances give way to an elegant wine with flavors of black fruit.

2015 Lenné Estate Pinot Noir: As I said before, my comment after sipping this wine was chocolate in a glass. This wine is very dry with aromas and flavors of chocolate and strawberry.

2017 Eleanor’s 114 Pinot Noir: Named after Steve’s mother, Eleanor, the wine showcases a single clone,114 Pinot Noir, one of only a few in the Willamette Valley. The clone is typically used to add bright red fruit. I sensed a more complex wine featuring strawberry on the palate and a wine.

Although I started this article by saying the Lenné vineyard is an anomaly in the Yamhill- Carlton AVA, it also symbolizes the diversity of the Willamette Valley and this particular appellation. Steve Lutz has perfected his wines to exemplify his philosophy for making Pinot Noir based on his terroir.