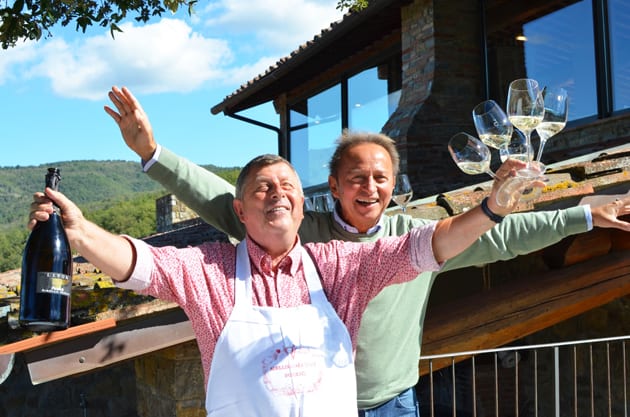 The Italian winemaking family typically involves a legacy of generations, an inherent passion for wine, and insatiable love of the land where they grew up. Today many of these families are spreading their influence to encompass several different wine regions. This expansion often includes creating either a resort or a unique destination for wine enthusiasts to enjoy. Such was the case when I  visited Azienda Agricola Livon, which represents three distinct wineries, Livon in Collio, Borgo Salcetino in Tuscany, and ColSanto in Umbria.

It began in 1964 when Dorino Livon’s dream came to fruition in Friuli, his homeland. Dorino sold lumber to buy his first piece of property. This region that includes Collio and Colli Orientali del Friuli lies in the most northeastern section of Italy. At the time, this area was not as well known, and a gamble that paid off.

By the 1970s, Dorino’s sons, Valneo and Tonino, played roles in the winery’s production.  Starting in the 1980s, their impact brought the winery forward.  They chose to produce more limited quantities of their Cru wines by picking the most suitable vineyards to exemplify these wines.  They also accomplished this through the reduction of grape quantity per hectare, shorter pruning, and planting more densely.  These changes are incorporated in all their wineries. In addition, they created two distinct wine cellars for the Collio wine.  The “Masarotte” wine cellar handles all the Cru production, while “Venco” wine cellar manages all other white wines.

It was Valneo and Tonino that decided to expand the winery into other noted wine-producing areas.  Between the years 1992 and 1997, they purchased three farms, two in Friuli Venezia Giulia, Villa Chiopris, and Tenuta Roncalto.  The third property was Borgo Salcetino located in the Chianti Classico region of Tuscany.  In 2001 the winery had another growth spurt when the Livon’s purchased ColSanto, located in the Bevagna municipality in Perugia, Umbria.    The site lies in the heart of the Montefalco DOCG.

Today Matteo Livon, Valneo’s son, is playing his role in continuing the legacy of the winery.   Matteo represents the third generation and one day will preside at the helm.

This is an excerpt from an article published on Wander with Wonder.