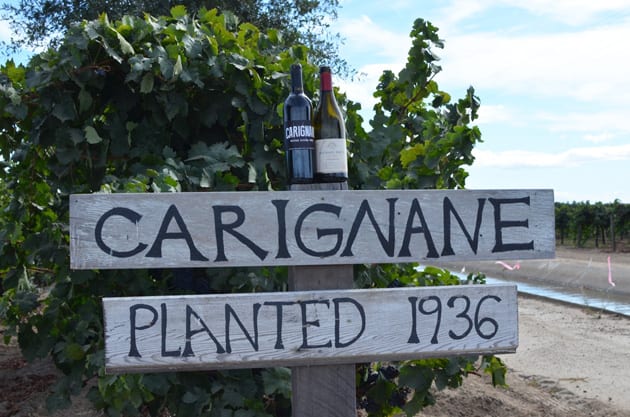 Most people think of Lodi as the land of Zinfandel especially old vine Zinfandel; however, once you get to know the wineries of this area, you will discover that there are over 100 different grapes grown in Lodi. If you are a wine geek like me, you will love exploring some of the unique lesser-known wine varietals cultivated in Lodi.

Lodi was established as an appellation in 1986. Today, seven sub-regions encompass the entire Lodi AVA. The area consists of 110,000 acres of vineyards with 85 wineries producing wine. The region has a classic Mediterranean climate with warm days and cool nights. Delta Breezes from the San Joaquin/Sacramento River Delta provides a cooling effect during the growing season. Therefore the climate plays an important factor in the diversity of grape varieties.

The appellation has expanded from the riverbeds around the Mokelumne and Cosumnes Rivers where the soils are sandy and more fertile to the rolling hills in the eastern portion of the appellation. Since these newer areas are less fertile and the mixture of soil composition serves to help promote diversity in the varietals cultivated.

Here are the wine varietals sampled during the Lodi in Los Angeles seminar and main tasting.

Our first wine of the seminar featured a variety unfamiliar to me, Bourboulenc from Acquiesce. Bourboulenc primarily grows in the South of France and is known as a late-ripening grape. This wine exhibited wonderful perfumes on the nose and subtle flavors of melon and citrus on the palate. The wine is bright and typifies the light, and crisp wine Acquiesce sets out to achieve.

Uvaggio Vermentino reminded me of those I sampled in Tuscany. One finds herbaceous aromas and flavors of citrus primarily lemon, while the quality proves the excellence of this wine.

Bokisch Vineyards is known for their Spanish, and Portuguese wines and the Verdelho is an example of the excellent qualities of wine produced in Lodi. The wine is bright and crisp with hints of lime, pineapple, and apples.

Fields Family Cinsault presents itself as a lighter very elegant red. The grapes also called Black Malvasia comes from a vineyard planted in 1886, Bechthold Vineyard, and thought to be one of the oldest in the world growing Cinsault.

This wine tasting was not the first time I sampled the McCay Cellars Grenache. The wine displays bright fruits with a spicy finish. On both occasions, I found the wine superb and one of my favorites.

The LangeTwins produce an eclectic portfolio of wine and this year brought something new, Montepulciano, a wine which displays bright red berry fruits.

Dornfelder is a very intense wine. The grape originated in Germany and produces a very dark rich wine. Prie Vineyards Dornfelder typifies the character of this varietal, and I consider one of the better examples of this variety in California.

Old vine Carignan is a phenomenon in Lodi. As a result, you find some extraordinary wines that stand up nicely to Lodi’s Old Vine Zinfandel. These old vines with their own unique forms resemble contemporary sculptures.

Klinker-Brick’s Carignane comes from 110-year-old vines in the Rauser Vineyard, located on the eastern side of Lodi. With an intense color, the wine is full-bodied, bright and balanced with dark fruit flavors. Klinker-Brick also produces a Rosé blend that features Carignane with Grenache, Syrah and Mourvédre called Bricks & Roses.

Markus Wine Company Domo is another example of Carignane but in this case, blended with Petite Sirah and Syrah. Though lighter in body, the wine holds its own in-depth and quality and represents a testament to winemaker, Markus Niggli’s, talents. The wine displays flavors of plum and cherry.

Charbono, a red grape known as Corbeau de Savoie in Eastern France and in Savoie they call it Douce Noir. Those familiar with Argentinean wines are familiar with this grape because in Argentina it is called Bonardo. Paskett Vineyards Charbono is a rustic wine with flavors of red berries and hints of smoke on the finish.

One cannot visit Lodi or a Lodi tasting without sampling at least one Zinfandel. Some of my favorites are those from St. Amant, especially the Old Vine Zinfandel from Marian’s Vineyard, a vineyard planted in 1901. The wine is very integrated and together with flavors of licorice.

Other Zinfandels worth sampling include Oak Farm Zinfandel and Klinker-Brick Old Vine Zinfandel.

This article does not even begin to touch on the 100 plus grapes grown in Lodi. Knowing so many wine varietals exist; it is worth a visit to broaden your horizons of Lodi as a diversified wine region.