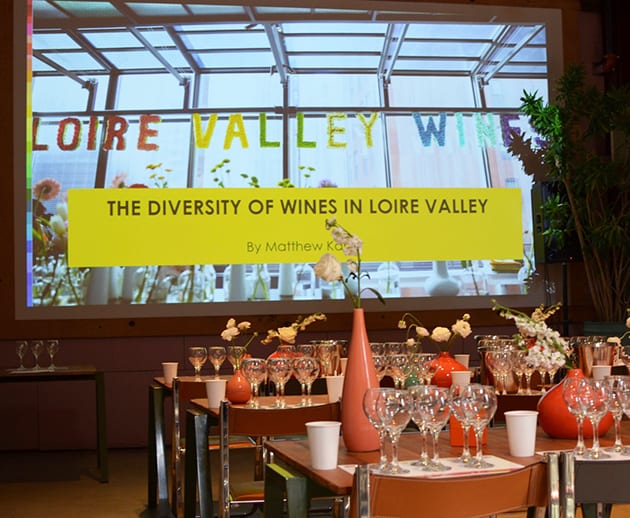 Diversity of grape varieties is one of the best ways to describe Loire Valley wines.  Spring to Loire 2019 presented a trade tasting with three seminars, led by Matthew Kaner, focused on France’s most diverse wine region.  Not only does one find diversity of grapes in the region but diversity of the climate and soils.  Meshing all three together, you sense a cultural landscape, which makes the Loire Valley the garden of France.

The Loire Valley grows at least 24 grape varieties with the top ones being Pinot Noir and Cabernet Franc in reds and Chenin Blanc, Melon De Bourgogne and Sauvignon Blanc in the whites.  The majority of the wine produced is white followed by Rosé, red and sparkling.  Other reds also grown in the region include Pinot Noir Grolleau ( a Light red variety often used in sparkling wine), Gamay, Pineau D’Aunis (a light skinned red grape), and Côt, also known as Malbec.

The Loire Valley is the largest AOP in France and one of the ten main wine producing areas in that country.  The Loire River, the longest in France traverses through all the regions of the Loire Valley.  Most of the wineries are situated along the river.  From the Upper Loire, you find Sauvignon Blanc.  The Middle Loire, which consists of the regions of Touraine, Saumur, Chinon, and Vouvray you find Chenin Blanc and Cabernet Franc predominantly, while the Lower Loire, which starts at the entrance of the Atlantic ocean and considered the Muscat region is known for Melon de Bourgogne.

The Atlantic ocean and the Loire River depending on the location influences the climate of the area.  The locations furthest from the sea see a more European continental climate, but the majority of the valley from Nantes through Angers to Tours receive ocean breezes from the Atlantic.

The soils range from igneous and metamorphic rock from the Massif Armoricain in the Nantes area to more sedimentary rocks and seashells in the Paris Bassin. The Massif Central Highland region features inactive volcanos. More precisely in Pays Nantais soils are composed of volcanic rock, gneiss, and granite.  In Anjou Schists, chalk and limestone exist while in Saumur chalky soils dominate. Touraine sees the chalky soils in the west but flinty clay and sand in the east.  On the slopes, clay and limestone predominate.  On the banks of the Loire, the soils are gravelly.  Finally in the Centre-Loire one finds chalk, clay, limestone, and flint.

The overall area for producing Rosé wines in the Loire Valley centers in the Rosé de Loire known as the PGI Val de Loire.  This appellation, created in 1974 covers the territory of Anjou and Touraine.  The Rosés in this area are off-dry, fresh and fruity. The residual sugar must be less than 3 grams per liter of sugar.

Rosé-d’anjou is the oldest area producing  slightly sweeter Rosés because the minimum grams of sugar is 7 and must not exceed more than 20 grams of sugar.  In this appellation, the fruit is more pronounced and wine itself seems denser.

Marquis de Goutaine Rosé d’Anjou 2018 although semi-sweet the wine is fresh, crisp and clean yet elegant and very flavorful without being overly sweet.

Marquis de Goulaine Touraine Sauvignon Blanc 2017 delivers a soft elegance in both the aromas and on the palate.  This wine is light and refreshing showing the purity of the fruit.

Marquis de Goulaine Chinon Le Haut Presle 2017 was my favorite Cabernet Franc.  The wine delivered a very feminine demur with a purity that was light and balanced.

Note: Common to the wine industry, this writer was hosted to this wine tasting. While it has not influenced this review, the writer believes in full disclosure.