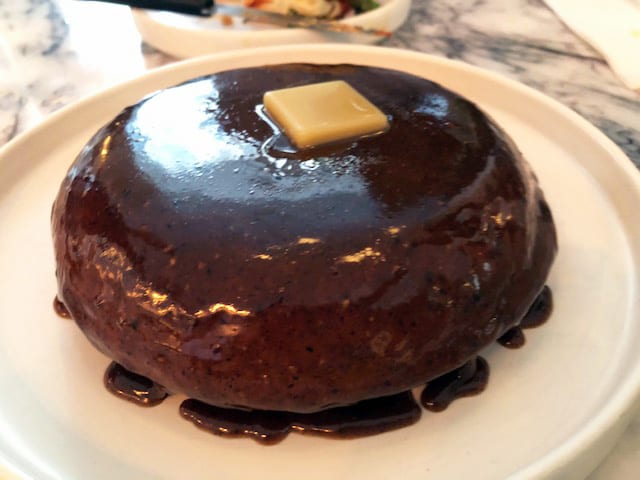 Sunday in Brooklyn is known for its divine pancakes, which are also on Sibling Rival’s menu. Considered the most popular dish at both restaurants, it is worth a trip downtown for a Sunday brunch. The pancake is more like a cake created in a pan. The pancake is thick and yummy with a Hazelnut Maple Praline, Brown Butter sauce on top. Find a rich and filling entree, so make sure you have room for a big breakfast. I certainly want to visit for brunch after taking a bite because I found the best pancake I have yet to taste.

I was wowed by my meal and tour of this Los Angeles restaurant. My visit, a luncheon on Valentine’s Day, made the trip fighting traffic downtown worth it. I was mesmerized by the food and the accommodations considered due to my dietary restrictions.

Although I do not remember the assortment of liquor used to make Sibling Rival’s Valentine’s Day Cocktail, the presentation would thrill any sweetheart. I am not a hard liquor drinking but, tasting this cocktail; I could be enticed.

Next came the Wood Roasted Sunchokes with mandarin oranges, another delicious dish with sweet and savory flavors.

Although I refrained from sampling, my tablemates enjoyed the Charred Shishito Peppers with garlic yuzu vinaigrette, sesame, anchovy Crème Fraiche.

For the main course, I enjoyed the Green Toast with Avocado, basil oil, cashew cheese, pea shoots, crumbled cashew. Because of my allergies, they served mine on a brown bread gluten-free toast. This is the perfect vegetarian dish.

Leave room for dessert because Sibling Rival is known for their pies from Pastry Chef Mallory Cayon. Here is what we enjoyed: Maple Pudding Pie, Huckleberry Cheesecake, and Chocolate soft ice cream. The later was dairy-free.

Touring the kitchen, Chef John’s impressive organization encourages a smooth running restaurant and kitchen. Everything is labeled clearly. No need to search for something it is quite easily displayed.

In addition to the Sibling Rival, stroll up to the rooftop deck to view the pool, the view, and enjoy a drink at the bar. Also, consider dinner at the Pilot. This restaurant opens for dinner only. Although stuffed from lunch, touring the kitchen, and getting I whiff of the aromas for preparation, I felt like waiting around for dinner to discover the dinner offering at this Los Angeles restaurant.

If you are going to the theater in downtown Los Angeles or just looking for a downtown restaurant, you cannot go wrong with Sibling Rival. It is open for breakfast, lunch, and dinner.