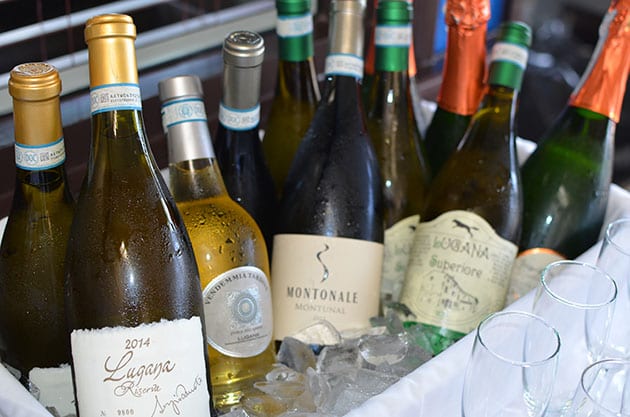 Lugana plays a significant role in Italian wine history. The region was the first in Italy to obtain its DOC designation in 1967. Situated on the lower portion of Lake Garda in northern Italy, the wine region embodies two provinces Brescia and Verona and two regions Lombardy and Veneto. Furthermore, this area is strictly known for its white wines.

The grape of the area is Turbiana or Trebbiano di Lugana, a distant relative of Verdicchio and different than similar varieties found in Tuscany or Umbria. One discovers more texture and structure with Turbiana. The grape is medium-sized with a thicker skin and delivers less yield than other Trebbiano wines in Italy.

Lake Garda is a glacier lake, the largest lake in Italy. The soil composition in the area combines fossils, clay, slate, and limestone. The low hills, Mediterranean climate and the microclimate of the lake work together to create a full-bodied and age-worthy white wine.

Besides approximately 1200 hectares of grapevines in the region, the area also grows lemons and olives.  Concerning the latter, the district is the most northern in Italy for the cultivation of olives.

Under the Lugana DOC, there are five categories of wines produced:

The basic Lugana ages for 4-5 months and typically has a light straw color with a bouquet of floral and almond notes.

Lugana Superiore ages for a minimum of 12 months. The color is golden and the wine more complex. The designation Superiore occurred in 1998.

Lugana Reserva ages for 24months with at least six months aging in the bottle. In this case, the wine becomes richer, warmer and more complex on the palate.

Lugana Vendemmia Tardiva is the region’s version of dessert wine.  Over-ripening of the grapes makes this wine different from its Italian counterpart, Passito. The grapes are picked in late October or early November rather than being harvested and set aside to dry for several months.

Production of Lugana Spumante utilizes either the Charmat or Method Traditional.

Two wine tasting opportunities allowed me to sample wines from Lugana.  The first a luncheon with the Consorzio Tutela Lugana DOC and the other, LA Wine Writers luncheon at Cafe Del Rey led by Laura Donadoni.

We began with a Cà Maiol Brut created in the Metodo Classico; this sparkling wine delivered flavors of almonds and brioche.

We moved to the 2016 Zeni Marogne. The grapes for this wine come from an older vineyard. I found the wine viscous with more body and balance. The predominance of citrus flavors was quite prevalent making this a very refreshing wine.

The third wine sampled was the 2013 Lugana Le Moritte Riserva, a very clean wine with aromas and flavors of lemon. The salinity and minerality are quite apparent due to the limestone soils particular part of the region.

Our luncheon started with the Cascina Maddalena Lugana doc Brut “Leonardo” Metodo Classico. This sparkling wine began five years ago as an experiment and continues as a winery side project. I found a bright yet creamy sparkling wine with flavors of almonds, brioche, and citrus.  The wine conveys lots of spunk.

The 2015 Montonal takes its name from a small local village, initially called Montunal. The soil composition gives this wine its backbone but also the cooling of the grapes before pressing makes this wine unique. Aromas of white flowers and citrus permeate the wine. There is a sweetness that accents the fruity and creamy textures of the wine.

Probably my favorite of the Lugana wines sampled, the Cà Lojera Lugana Superiore 2014 because the wine seemed more complex with structure due to the wine fermentation in large Slovenian barrels before aging for a year in stainless steel.   The wine displayed flavors of honey and acacia.

Zenato Lugana Riserva Sergio Zenato 2014 is the most complex of the wines sampled from Lugana DOC. The wine also had the most sapidity. These characteristics result from grapes grown on the southern shores of Lake Garda on one of the areas historic vineyards. The fermentation process consists of 70% occurring in barrels while the remaining 30% ferments in stainless steel, after which, the wine ages six months in wooden barrels and another year in the bottle.

We finished our luncheon with the Lugana Vendemmia Tardiva. This wine serves as an excellent dessert wine because of its balance between sweet and savory flavors. By harvesting later Botrytis sets in. I found aromas similar to Riesling and savory aspects to the wine.

I left both tastings impressed with the quality of wine produced in Lugana DOC, and a better understanding of what the Turbiana grape offers as an alternative for those desiring a unique white wine.