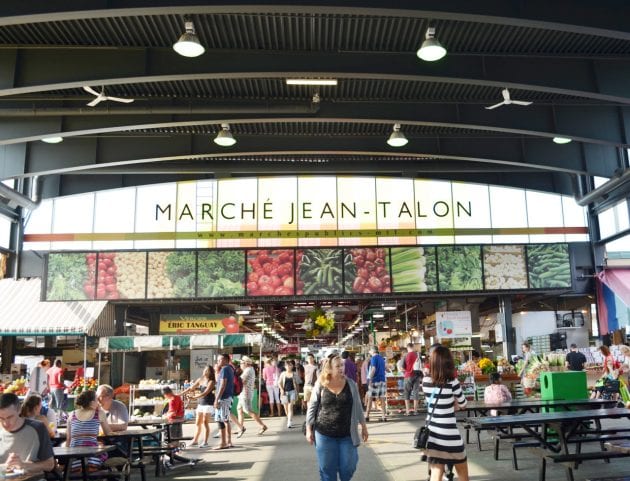 The virtues of the city of Montreal come in many forms. History tells us that Montreal’s cultural beginnings derived from both the French and the English. But the life of this city comes from the charm of the old city, its harmonious sensibility, and leanings towards music, its eclectic multicultural presence. If you are a foodie you cannot miss the cuisine.  From the rise of food trucks across the city to outstanding restaurants to the farmer’s markets, you will no doubt have an incredible food-driven experience.

Are you a foodie that loves to cook?  Think farmers markets – you have not seen anything till you experience Jean-Talon Market.  Probably the largest Farmers Market, the size of Costco only really fresh with nothing processed or commercial made. Not only is it the largest farmers market in Canada and the United States, but it is also the grandest in market-speak.  It is also the oldest market in Montreal.  The market originally opened in 1933 under the name “Marché du Nord,” the north end market.  The name was later changed.  Jean-Talon is open daily all year round.

The market was originally a La Crosse field, making the size immense.  The field was known as Shamrock and is located in Little Italy.  It is composed of over 350 producers who sell everything from fruits, vegetables, meats, specialty items, spices, flowers, and more.  On the weekend, it is a family outing bringing out a colorful array of people and produce.  Instead of going to church each week, families spend their morning at the market.  Your senses will be tantalized as you sample some of the epicurean delights found throughout Jean-Talon. Market

Our guide through the market was Ronald Poire, owner of VDM Global. His passion for food and its cultural history was quite evident.  To use Ronald’s words, “follow food and you will follow tradition” and that we certainly did as we meandered through the marketplace and along the streets of Little Italy.

In describing the culture of food, history tells us that pasta came from China; the tomato originated in South America, and the use of oil in cooking comes from Jewish heritage.  Italian cuisine is a blending of all these cultures.

Strolling through the market, we sampled Lucum, a Turkish candy with a powdered sugar outer layer.  Montreal is known for its cured meats, and charcuterie is available at Jean-Talon Market.  They also have marvelous sausage, and sampling the various types of sausages is a must at this market.  Set foot into one of the bakeries to taste the freshly made bread as we tried a yummy olive bread.

In addition to the individual farmers, there is a shop representing the Union Producers of Agriculture, UPA, a coop of farm producers, who showcase their products in this store.  Here you can find an unusual assortment of gourmet items including Rhubarb juice, boar meat, Peminchan, a smoked beef that is similar yet at the same time different than beef jerky.

After Prohibition, the majority of wine sold in Canada came through a nationalized liquor controlled board outlet or at an establishment owned by the winery or grape grower.  One exception is in the instance when a winegrower/farmer is affiliated with the UPA; they can sell their wine at the UPA store.  At Jean-Talon Market in the UPA store, you can find some great Canadian wine to purchase.

Like the families that visit weekly, you might want to end your jaunt to Jean-Talon market by strolling to one of the nearby local Italian coffee houses, sitting, sipping an Espresso, and savoring homemade Cannelloni.   It makes for an ideal ending to a perfect foodie day.