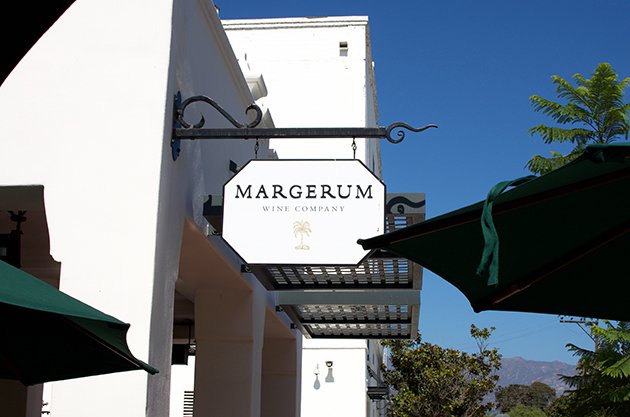 A trip to Santa Barbara must include wine tasting, and a must-stop tasting room in the Santa Barbara wine scene is Margerum Wine Company and Barden Wines. Doug Margerum has been a fixture in Santa Barbara from his days of owning the Wine Cask, but the inviting ambiance of the tasting room in its modern Spanish building also draws you to this location—located across from the Hotel Californian in the center of the Funk Zone. Nearby are great restaurants, the pier, and the coastline.

Doug has always had a love for food and wine. He is a pioneer in putting Santa Barbara on the map as a food and wine destination. After graduating from UCSB in 1981 with a business and economics degree, Doug moved into the wine business’s retail side. Here his passion for wine increased to the point that he ventured into making his own wine.

Doug’s demeanor plays right into the enjoyment of his wines. His goal as a winemaker is to create handcrafted wine with the added dimension of the personal touch. When he started Margerum in 2001, his focus was on the Rhone varietals. Doug owns an 18-acre estate in the Los Olivos AVA, where he grows most of his Rhone varieties. He also sources from local growers in the area, including Sta. Rita Hills, where he obtains the grapes for his Barden Wines.

The Barden wine project began in 2012. One might ask how Barden got its name. Doug never was given a middle name, so he, his family, and friends worked on a middle name for Doug at a get-together. It turns out Barden was a family name of a relative, and it means lives near the boars den. The Sta. Rita Hills, the area of Barden’s wine focus, has boars living in its hillsides. How apropos that Barden became Doug’s middle name because he was also born in the year of the boar, making it the ideal title for his second label. The logo on the bottle is a boar.

Not only does Doug make Rhone and Burgundian wines, but he also makes some unusual distilled and fortified wines that can only be tasted and obtained at the tasting room.

Amaro is a non-vintage wine as it utilized the Solaro method of aging. This concept means that fractional portions are blended to create a product with mixed ages. This process allows the average age to increase as the years go by.

Amaro means bitter in Italian and is considered an Italian herbal Liquor. The Amaro consists of fortified wine mixed with herbs, including sage, thyme, marjoram, parsley, lemon verbena, rosemary, and mint as well as roots and bark and dried orange peels, and caramelized simple syrup. The wine ages in casks outside. Think of a late harvest wine with herbs added to give it savory qualities. Amaro can be used as a digestive aid. It is a great after-dinner drink, but Doug has taken it one step further by making it into fabulous ice cream.

Mute-Age is the first Grenache based fortified dessert wine. The wine is designed to go with chocolate. The wine ages outside on the winery’s rooftop in 34-liter demi-john glass bottles for two years. There is a lightness to this dessert wine that makes it very special. Inspiration for this dessert wine comes from the French appellation called Banyuls, where both fortified and dessert wines are produced from old vines.

Both these wines are very special and a must-try when visiting Margerum.

Any tasting of Margerum wine must include the M5, the winery’s flagship wine. The M stands for Margerum and the 5 stands for its 5 Rhone grapes: Grenache, Syrah, Mourvèdre, Cinsault, and Counoise. The white version of this wine known as M5 White Rhone Blend includes these 5 grapes, Grenache Blanc, Marsanne, Roussanne, Viognier, and Picpoul.

Here are some of my favorites from the tasting, beginning with the whites and moving to the red.

Sybarite Sauvignon Blanc, Happy Canyon: The first words out of my mouth to describe this wine is alive. Sybarite means seeking pleasure, and the wine defines its meaning. The wine bursts with flavors. I found a bright, crisp wine that jumps on your palate. The wine has texture that comes from the lees.

Cinsault, Margerum Estate Vineyards, Los Olivos District: By far, my favorite wine of the tasting; I found an easy-drinking summer wine. For Doug, the wine reminds him of the south of France. The wine has savory qualities that accent the cherry flavors mixed with red vine licorice. The aromas exhibit sweetness.

Viognier, Sanford & Benedict: The story of this wine is rather interesting. The little plot in the vineyard is located in the middle of the vineyard with a sign that says Viognier with question marks on either side as if to say we’re not sure if it is actually Viognier. Tasting the wine, you know it is Viognier. This version delivers a very subtle understatement.

As stated earlier in this article, round out a visit to Santa Barbara with a stop at Margerum Wine Company. The consistency of the wine will impress any wine enthusiast.

Note: Common to the wine industry, this writer received a hosted wine tasting. While it has not influenced this review, the writer believes in full disclosure.