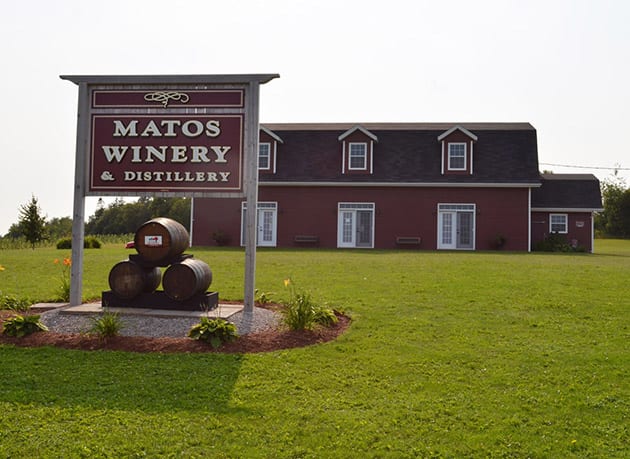 You never know where you might spot a winery. When a group of wine writers toured Prince Edward Island, Canada, they discovered there are three wineries on the island, and of course, being the wine journalists, we had to visit at least one winery. We chose Matos Winery & Distillery.

Most people traveling to the PEI explore the Capital, Charlottetown, with its charming shops and streets, tour its red sand beaches, lighthouses, and fishing villages or visit Green Gables, the inspiration for Lucy Maud Montgomery’s book, Anne of Green Gables. Prince Edward Island is known for its potato industry. There are 30 varieties grown on the island. The fertile land, with its rolling hills, makes it an excellent location for growing grapes.

Matos Winery lies south of Charlottetown in Cornwall. The winery sits atop a rolling hill and offers a vista of farmland and pastures. The winery is family-run by Jaime and Heather Matos and specializes in Chardonnay and Gamay – Noir. The Matos’ purchased the property, 50 acres in 2007, and began planting Chardonnay and Gamay – Noir that same year. The vines were imported from France. Both Jaime and Heather are of Portuguese descent. They are not newcomers to the business. Jaime, at a young age, assisted his father with his vineyards on the island of Pico in the Acores, and once he moved to Ontario, he ran a U-Brew business that made wine from juices brought in from California, Greece, Italy, and Chile.

Jaime was determined to have his own winery, and after purchasing the land on Prince Edward Island and planting his grapes, he permanently moved from Ontario to PEI in 2008. Winery construction began in 2010, and the winery opened to the public in 2011. Matos’ first vintage, a Chardonnay, was in that same year.

Meeting Jaime, you find a humble man who you immediately know loves what he is creating. His love of wine permeates his winery as you look around. He was gracious as he chatted and poured wine to our group, who opted to visit the winery unannounced.

We started with the Chardonnay, a light unoaked wine with flavors of apple. Next, we sampled the Rose of Gamay – Noir, a very refreshing wine that brings to mind the summer fruits of strawberry and peach.

The Gamay – Noir was light bright and vibrant. It was the Wild Berry Gamay that was a favorite. With aromas of blackberry, raspberry, the wine is fortified with enzymes of blackberry. The wine is not too sweet but definitely yummy.

As Jaime also has a distillery, we could not leave without trying some of his liquors. His Anisette is marvelous. Although we did not taste it, Jaime makes Bagaco, which you might say is the Portuguese version of Grappa and is also known as “fire water.”

We ended our visit with Angelica. Jaime’s version is very light and delicate, exuding the flavors of apricot. Like the Wild Berry Gamay, this is a must try.

After tasting all the wines of Matos, it is quite apparent there is a consistency that exists in all the wines produced; they are all very clean and soft in quality.

It was an unexpected delight finding this little gem of a winery on Prince Edward Island and one that made our visit very special.

If you go to Prince Edward Island: