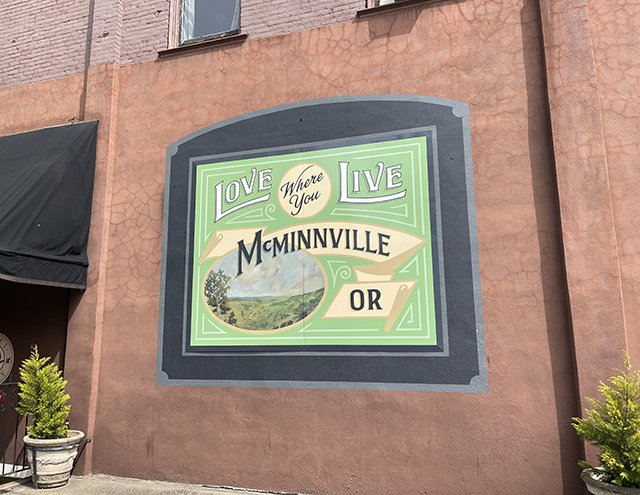 McMinnville, Oregon, lies in the heart of the Willamette Valley in Yamhill County, halfway between Portland and Salem. As a wine lover, the town is in the heart of wine country, so the area boasts excellent wine, especially Chardonnay and Pinot Noir. Although Pinot Geeks love to visit, there are many other things to do. McMinnville’s most famous resident is the Spruce Goose. The city is home to many Oregonian artisans, winemakers, and purveyors of locally sourced food.

McMinnville’s charming downtown area dates back to the late 1800s when William T. Newby, the town’s founder, built a grist mill, first platted the town, and named it after his hometown of McMinnville, Tennessee. He later donated the land to a higher learning institution that became Linfield University.

McMinnville brings out the old-world charm and warmth of small-town living for those who want to get away from the hustle of big cities like Portland, Salem, or Eugene.

You do not have to be a wine lover to visit McMinnville because, as you will discover, the area has many exciting things to do both in town and in the nearby vicinity.

1.  Spruce Goose – Step On Board The Flying Boat

A trip to McMinnville must include a visit to the Spruce Goose. Living in  Los Angeles, many never got to see Howard Hughes’ omnipotent plane when it moored in Long Beach next to the Queen Mary. When the aircraft or flying boat, as some call it, moved to the Evergreen Aviation Museum, they restored the plane.

The Spruce Goose, known as the H-4 Hercules, is a prototype strategic airlift flying boat. Designed and built by the Hughes Aircraft Company, it was intended as a transatlantic flight transport for use during World War II. Unfortunately, the plane was not completed in time. The plane officially flew one time in 1947.

Not only can you view one of the largest planes ever constructed, but you can go on board. It is amazing to see the wingspan.  During restoration, they found the cargo area filled with beach balls. Hughes packed hundreds of them into the wings and tail. He considered them a special flotation device in case the plane started to sink.

The museum features aircraft starting in the early 1900s continuing through WWI, WWII, and Vietnam. The highlights are the Blackbird SR-71 and, for space lovers, the Titan II SLV.

The museum divides the exhibits into two buildings. One contains aircraft from commercial and military aviation. The other building is dedicated to space exploration.

Looking up at the immense size of the Titan II SLV brings back memories of days in the 1960s and 1970s when space exploration was novel and not as routine. The Titan represents the beginning of the Gemini program that launched two men into earth orbit, practicing everything they needed to go to the moon.

Take a step back in time as you walk the main street of downtown McMinnville. Pop into a restaurant, curio shops, antiques, art galleries, bookstores, wine tasting rooms, and bars, or just window shop as you enjoy the charm and quaint old town atmosphere of 2nd and 3rd Street.

You can tell a lot about a city by their farmer markets, especially in a town known for serving fresh and local cuisine. It is an opportunity to meet the locals, both farmers and those living in the surrounding community. Have fun looking at the displays, finding food items local to the region that differ from other areas.

McMinnville’s Farmers Market is open from noon to 6 pm on Thursdays, May through October at First and Cowl street, right adjacent to McMinnville City Hall.

This is an excerpt of an article I wrote for Rovology.

To Read the other 11 things To Do In McMinnville