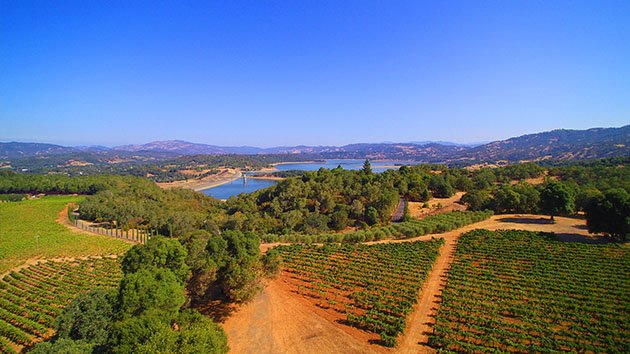 You might say Charlie Barra was a maverick. He was ahead of his time. Charlie purchased his vineyard in 1955, way ahead of the wine boom bringing many of our pioneering wineries to Napa and Sonoma in the 1960s and 1970s. Starting as a grape grower, he set the standard for Mendocino County wine and California’s wine industry not only by being one of the first to cultivate grapes but by utilizing organic farming. Later in the 1990s, he began producing wine.

His legacy is carried on by his wife Martha and her two children Shawn and Shelley. They continue farming organically, thus pursuing Charlie’s dream. They are now passing their 65th year as a winery entirely family-owned and farmed.

Today they continue producing the wine under the Barra of Mendocino label that began in the 1990s. In 2003 they launched their Girasole Vineyards brand. The Barra family also owns and organically farms 350 acres. In addition, the family farms 200 olive trees, which produces their olive oil.

Charlie was born into Calpella, CA. His parents, Italian immigrants from Piedmont, came from families that worked the vineyards since the mid-1800s. Grapes were in Charlie’s blood. It was in 1955, at the age of 24, that Charlie purchased his Redwood Valley Vineyards. At the time, the property contained 175 acres located at the Russian River’s headwaters and hugging the base of rolling foothills.

Charlie was a leader in organics for Mendocino. He was ahead of his time getting into what today is a trendy way of farming.

Charlie’s achievements and inventiveness were diverse and wide-ranging. He creates and utilizes a sprinkler system for frost protection in vineyards. Charlie constructed five water reservoirs for storing winter water runoff to use for frost protection and irrigation. He also pioneered grape gondolas for in-field harvesting of grapes, making the use of wooden boxes in the field obsolete.

As a founding member, past president, and a 41-year board member of the California North Coast Grape Growers Association, he lobbied for various grower causes. These included varietal percentage change in wines from 51% to 75%, the first appellation designation in the U.S, and pricing regulations that said a grower and winery had to agree on prices before grapes are crushed.

After graduating from UC Davis, Randy began his career at Korbel, where he spent 20 years. After leaving Korbel, Randy was a consultant in the bulk wine business. He met the Barra’s at their custom crush facility. Randy joined Barra of Mendocino in 2019.

Barra of Mendocino’s vineyards is located further inland. In this area, the diurnal shift from day to night is about 50 degrees. The location is cooler than Sonoma and Napa. Red soils are prevalent in this region of Mendocino.

In 1989 all vineyards converted to organic farming, utilizing no pesticides, insecticides, or herbicides. The vineyards are inspected each year and certified.

Today the Redwood Valley Vineyards consist of 264 acres and includes the original home ranch. The soils contain both Pinnobie and Redvine. Pinnobie soils are found on terraces and have slopes of 0 to 15 percent, and formed in alluvium from sedimentary rocks. The Redvine are deep soils formed from old weathered alluvium derived from sedimentary rock lying underbrush and annual grasses.

This vineyard features 27 acres of Pinnobie soils planted in Petite Sirah and Zinfandel in 2000 and CCOF certified in 2001. Bella Collina means beautiful Hillside in Italian and befitting of this vineyard.

Consisting of 50 acres, this vineyard with soils of Pinole and Talmage soils and planted with Pinot Noir, Cabernet, and Zinfandel. Pinole soils consist of deep soils formed from old weathered alluvium derived from sedimentary rock underbrush and annual grasses. Talmage is deep soil, excessively drained and formed in alluvium from mixed sources. Typically Talmage is found on alluvial fans and plains

There are seven wines produced under the Barra of Mendocino label, which use the Barra premium fruit. I had the opportunity to sample one.

Petite Sirah 2018: Petite Sirah launched the Barra of Mendocino brand in 1997. The grapes come from the Bella Collina Vineyard. I highly recommend opening at least an hour before serving. This wine grows on you as it breathes. I found a full-bodied, big, intense wine with deep purple color. The wine delivers spicy elements that enhance the rich blackberry flavors. The wine ages 18 months in French oak, of which 25% is new.

Girasole means sunflowers in Italian. With sunflowers a prevalent flower growing around the estate, it seemed natural to name their second label after these flowers. They choose this name and the sunflower design of this brand because 80% of women drink wine. They wanted a happy and pleasing label that they felt would be acceptable to their customer base.

The Girasole brand produces nine wines. I sampled two of those wines.

Rosé 2020: This Rosé consists of 51% Pinot Noir and 49% Zinfandel and wows you with every sip. Not only is the wine fantastic, but it delivers quality at a reasonable price under $20. I found a refreshing crisp with fresh fruit flavors of strawberry. The Zinfandel gives the wine this upfront zest yet preserves the fruity character.

Charlie’s Blend 2019: This wine pays tribute by honoring Charlie and his legacy. Randy describes this wine as the most fun to create because, like a chef, who finds so many spices in the spice rack, Randy has many varieties to choose from to blend this wine after he has completed the Barra label wines.

The 2019 represents the first vintage of Charlie’s Blend, and it is a winner. The blend consists of Merlot, Cabernet Sauvignon, Zinfandel, and Petit Sirah. The grapes come from all three of the Barra Vineyards, which again pays homage to Charlie’s prowess in the vineyard. The wine’s youthful expression delivers a juicy and fruity character.

Charlie would be so proud of his family’s accomplishments in keeping his legacy and continuing what Charlie envisioned when he purchased the property in 1955. Let’s lift our glass to Charlie Barra because not as well-known as some of the other pioneers of the 60s and 70s; his influence in the grape-growing community is everlasting.