Exploring new wineries is always a thrill for a wine writer. Today we travel to the state of Washington to discover the pioneer of grape growers in the Horse Heaven Hills AVA, Mercer Wine Estate.

The Mercer family is now in its 5th generation and has been forging their way across the United States since before the Revolutionary War. They were one of the first pioneers to head west in the late 1800s to settle in the Horse Heaven Hills region, which was well before Washington became a state.

In the beginning, the Mercer’s herded sheep and then added cattle and wheat. It was in 1972 that Don and Linda Mercer decided to planted grapes making them the founding grape growers in the Horse Heaven Region region. They planted Cabernet Sauvignon and this first planting became known as Champoux Vineyard.   Although they primarily sell grapes to other vintners, the Mercer’s first vintage was in 2005 followed by the opening of their tasting room in 2009. Besides grapes, the family farms numerous other agricultural products including baby carrots.

Horse Heaven Hills AVA was established in 2005.  The AVA is located in Eastern Washington and is a sub-AVA of the Columbia Valley AVA. It is known for it south-facing slopes and sandy soils. Because this area is located in the Columbia Gorge, steady winds come through daily. As a result, these strong winds reduce the likelihood of fungus and rot on the vines.

Heading the Mercer team is winemaker, Jessica Munnell a native of Washington Wine Country. Her love of the Horse Heaven Hills region and its terroir comes through in each bottle of wine. Although the wine is big and powerful there is a feminine elegance that is quite apparent. 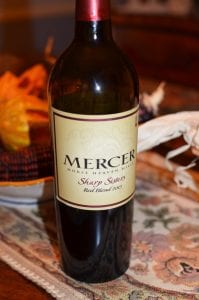 Tasting two of the Mercer Estate wines; the 2014 Malbec and the 2013 Sharp Sisters Red Blend there were several commonalities in the wine. Both were elegantly rich and velvety with soft tannins, a characteristic that the Horse Heaven Hills AVA is known for. Both are fruit-forward and reminiscent of the new world style of wines found in Argentina.

The 2014 Mercer Malbec is composed of 88% Malbec and 12% Cabernet Sauvignon. The addition of Cabernet softens the wine. One finds the wine has a viscous and powerful quality yet is rich and velvety. Flavors are predominately plum with hints of mocha and vanilla. While the wine is fermented in an oak tank, the Malbec and Cabernet Sauvignon are aged separately in new and used French oak barrels for 18 months. The two are later blended together. 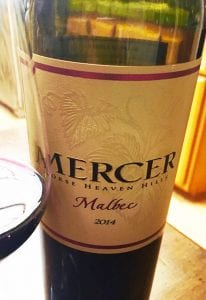 Mercer’s 2013 Sharp Sisters is a blend of Merlot, Syrah, Cabernet Sauvignon, Sangiovese, and Petit Verdot. The various components of the wine are aged separately for 20 months in both French and American oak prior to blending them together. The first aroma that presented itself made it quite evident that Syrah plays a major role in this wine. You could smell the Syrah a mile away. The other aromas were violets and vanilla. This is a well-blended fruit-forward wine. The wine has jammy qualities with flavors of blackberry and pepper. It is a yummy wine that is perfect for a steak dinner.

Sampling these two wines will entice anyone to see the beauty of this Columbia Valley Winery as well as explore more of the wines Mercer produces.

Note: Photo credit for the featured image above is courtesy of Mercer Wine Estate.  It pictures the Spice Cabinet Vineyard that overlooks the Columbia River.