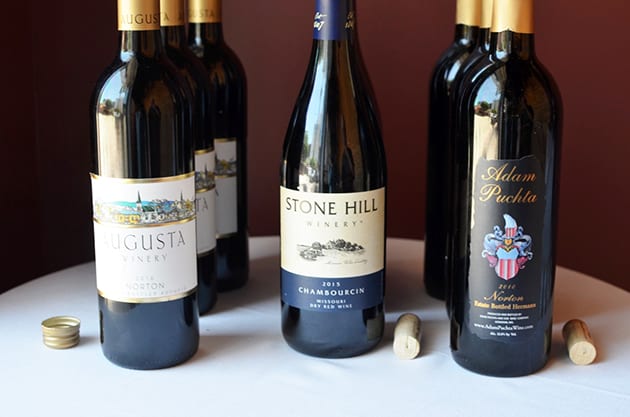 If you’ve ever wondered what the heck to pair with that bottle of Norton your friend brought you from her trip back home to Missouri, and Missouri Wines, I’ve got your answer:

Don’t be afraid of the bottle – Missouri winemakers have figured out pretty darn well how to make wine in their region. They have a long history of doing just that. Firstly, they’ve adopted grapes that have long grown well in the extreme climate, and secondly, they have hybridized vines to suit the weather and conditions. It’s just that we haven’t seen much of it here in the western U.S., as it mostly stays within the region.

The history of Missouri and wine dates back to the early 1800s, with the arrival of German immigrants who dubbed the area near the Missouri River, “Rhineland.” Italians followed, bringing their own winemaking traditions, and before you knew it, in the 1880s, Missouri was the largest wine-producing state in the nation. That’s right! Stone Hill Winery was the second-largest producer of wine in the country.

Norton is a native American grapevine, (originally from Virginia), long found in the midwest, and is Missouri’s official grape variety. Dr. Norton, over in Virginia, was seeking a grape that could stand up to the European varieties. Norton soon won accolades, even in Europe, and might be better known NOW, if not for Prohibition, which decimated the wine industry in Missouri.

During Prohibition, Norton lost favor, as wine production was now severely restricted, and was pulled up in favor of the Concord table grape. Since it was not known worldwide at that juncture because it was not grown outside of the U.S., it fell into obscurity. Cabernet and Merlot, on the other hand, were planted internationally, so were never too far from wine drinkers minds. They continued to be produced outside of the U.S., and both recognized by wine drinkers worldwide. Not so much with Norton, right? But, you can often drink a Norton in place of a Cabernet.

One example of a wine from a hybrid grape variety that I tried at our Missouri wine luncheon is the 2017 Chaumet Chardonel. Chardonel is a hybrid of Chardonnay and Seyval. It was a wonderful opener and filled the mouth with vivacious crisp fruit, olive, and nutty flavors.

Nortons consumed with gusto at our luncheon highlighting Missouri wines:

2010 Adam Putcha Winery Estate Bottled Norton ($25)
This wine reminded me a bit of Barolo with its full-bodied structure, without tremendous weight. Dark berry and spicy flavors.

2016 Augusta Winery
Estate Bottled Norton ($19)
Bold and structured, cherry, and green herb on the palate.
Both can be consumed with rich cheeses, smoky meats, and rich tomato-sauced dishes.

Blanc de Blanc
Stone Hill Winery NV ($13)
Brut made primarily from the Vidal grape. You might also recognize Vidal if you’ve enjoyed Canadian Ice Wine (sweet dessert wine ) – much of it is made from Vidal. The taste is quite different though – this is a dry sparkler, made in the Methode Champenoise style, like in Champagne, France. This sparkler has some bready aromas and flavors yet very enjoyable.

It was a Missouri scientist, (Charles V.Riley), that confirmed that grafting vinifera (typical European wine varieties) vines, to American rootstock would solve the phylloxera scourge – the louse that decimated French vines in the mid-1800s. The pest attacks the root, and some American rootstock is resistant to it. Grafting became a widely accepted practice, helping to save the European wine industry.

Missouri currently has upwards of 130 wineries and 11 distinct wine trails.

Norton is known as Cynthiana when grown in Arkansas.

Note: Common to the wine industry, LA Wine Writers, received wine samples. While it has not influenced this review, the writer believes in full disclosure.