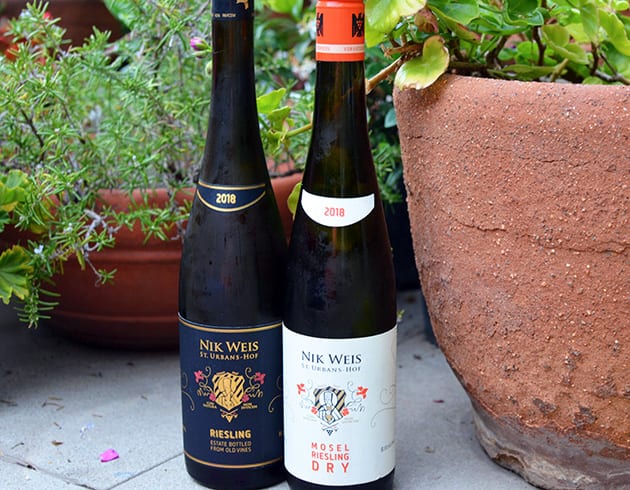 Riesling is one of the most aromatic grapes varieties.  Although the grape grows in areas all around the world including the United States, Austria, Australia, France, South Africa, and Canada, its originals come from the Rhine region of Germany.  Considered Germany’s most popular grape, Riesling grows in several German wine regions including Mosel, Rheingau, Nahe, and Pfalz. For this article, I will concentrate on Mosel Riesling.

Characteristics of Riesling depend on the climate.  In cooler regions like the Mosel, one finds flavors of apples and higher acidity balanced by residual sugars.  In slightly warmer climates like Alsace and Austria, one fines citrus and stone fruit such as peach very apparent.  The higher acidity gives the wine aging potential.

Mosel is considered the third-largest in Germany for the production of Riesling, yet some think it is the most prestigious region making some of the most outstanding wine in the country. The area is known for its steep slopes, and its northerly location produces light Rieslings with lower alcohol and crisp acidity.

The second-largest family-owned producer of Mosel Riesling is Nik Weis St. Urbans-Hof. Now in its third generation under the helm of Nik Weis.  Although the family-owned vineyards for several centuries, the winery was not established until 1949 when Nik’s grandfather Nicolas Weis founded it and named it St. Urban – Hof after the German patron saint of winemakers and Hof, which means estate. Nik’s father Hermann began managing the estate in the 1960s and expanded the nursery to become one of Germany’s largest. He also was instrumental in bringing Riesling to Canada’s Niagara Peninsula region.

Many of the vineyards owned by the Weis’ contain vines between 30 and 70 years old.  In Germany, old vines are considered to be 25 years and above.

Nik Weis’ St. Urbans-Hof Estate Riesling 2018 is considered their flagship wine.  The wine is off-dry and for the American palate semi-sweet.  Considered a traditional Mosel styled Riesling, the fruit for this wine comes from two locations, vineyard plots near the winery building in Leiwen, the Mosel Valley and 25 acres in Wiltingen, Saar Valley.  The difference in soil types creates almost a yin and yang, sweet to savory, in the wine.  The vines that grow near the winery feature sand, gravel and clay sedimentary soils from the Mosel River while slate bedrock keeps the water table elevated.  The Wiltingen s

Nik Weis’ St. Urbans-Hof Estate Dry Riesling 2018, is a newcomer to the United States.  Although the wine has been around in Germany for several years, Nik Weis held off on bringing this trocken (German for dry) Riesling to the US.  The current tastes for white wines in the US market make this an ideal Riesling with its crisp acidity and minerality.  It is a lively wine with aromas of apple and citrus and also the same characteristics on the palate accented by a savory finish.

Both these Nik Weis wines represent two distinct approaches found in Mosel Riesling.  Depending on your preference of style, either wine makes an excellent accompaniment to an eclectic assortment of cuisines, especially those summertime meals.