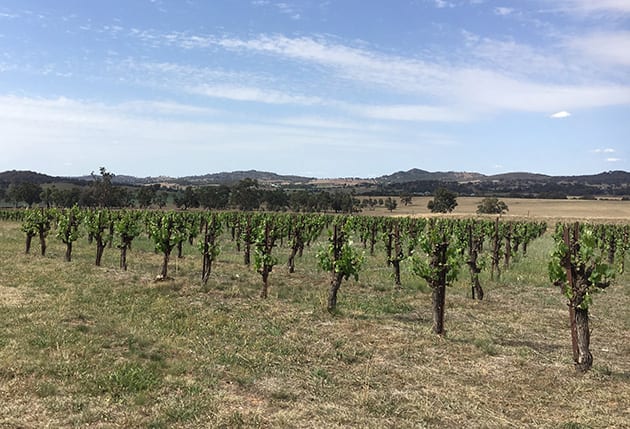 Some of the many delights of traveling are discovering an unexpected site, cozy restaurant, or photo op that takes you by surprise. The whole region of Mudgee was like that for me. An unknown (to me) wine region, that was one of my excursions to Australia Wine Country with the Wine Media Conference.

Australians know Mudgee as an award-winning foodie destination.  The area has been named the top foodie destination in Australia by booking.com. Sydney locals (and their foreign visitors) are encouraged to visit. The trip provides an easy weekend or a midweek getaway for those of you visiting friends in Sydney, or those of you simply visiting Sydney! Mudgee encourages friends of ex-pats to give their Sydney hosts a break, and shoot up Northwest!

The local produce (agriculture, cheese, vegetables, and fruit), proved to be fantastic: unfussy, sophisticated, and served by genuine, down-to-earth people. People, from what I experienced, had a super good mix of heart, ingenuity, and smarts. Dairy products stood out. Well, in each city I visited in Australia, dairy stood out. The eggs, the butter, the cheese. The EGGS. The first egg dish I had in Sydney I raved about. I figured that the restaurant just really knew how to scramble a good egg. Well, they did Indeed, but it turned out that every egg I had on my 2 1/2 week journey was rave-worthy — light, fresh, full of flavor.

Mudgee, and the Granite Belt, (another wine region down under, about which I will write about soon), also impressed me with their fresh local cheeses. Distinct Bleus, great Caerphilly,(a version of Cheddar with earthy and mushroomy flavors), and freshly made Fetta. ( Yes, it’s spelled with a double t. ) Each of these regions turns out their own happy cows grazing nearby. I’m sure they are happy cows. It would not taste like this delicious if they weren’t, trust me – I’m sure about it. I’ve had some good butter. But where I live in Los Angeles, you’ve got to be in a restaurant that really takes it’s bread and butter seriously. In Australia, it seems to be everywhere, not just in fussy places. Not many of those seem to exist anyway. Australia is just simply NOT fussy.

Another highlight of my Mudgee trip was one particular winery. OK, we visited many wineries, most quite good. After all, this was a wine press trip. But since I have a special interest in organic/biodynamic wine, my senses were peaked going in. After experiencing the wine at Lowe Wines, (and the expert tour by owner/winemaker/philosopher David Lowe), I would have been impressed even if they had not been farmed and vinified in this way. David Lowe explains, after studying in France and tasting wines produced organically, and comparing them to others, he was completely convinced that not only is this the best for our ecosystem and our own biology/health – it also produces the healthiest vine. Read an interview with David here.

Healthy vines translate to healthy grapes, and then to fresh and tasty wines. You could tell by the flavor. When I tasted David’s wines, I, too, became convinced. I have sought out organic and biodynamic wines for a couple of decades now, for my health, and also for the soils, and drinking LOWE Wines drives home why I do.

If, for some reason, you are not yet convinced, sit down at his wife’s restaurant on the property, (pretty much like her giant home kitchen). The Zin House sources their food locally- i.e., Chef Kim Currie’s organic garden is just outside the door.

We were treated to all manner of produce and local game in her creations:

I can still taste the fresh asparagus and green peas. The spinach and chard pie with its seeded crust and garbanzo beans was perfection, just the right flakiness combined with that tender, moist green filling! A stop at the Zin House is a necessity when visiting Mudgee.

You will be well taken care of.

Note: Common to the wine industry, this writer was hosted on her visit to Mudgee and its wineries and restaurants. While it has not influenced this review, the writer believes in full disclosure.