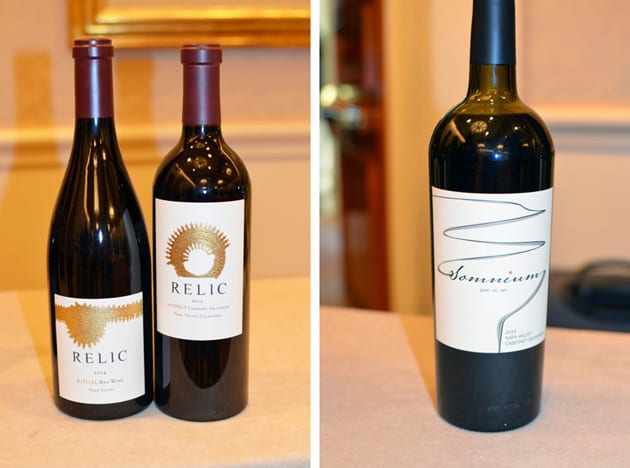 In terms of wine, it was a star-studded event as there were many new shining wine faces to meet at Stars of Napa Valley, a wine tasting put on by WineLA. The tasting mostly featured red wines from Napa with a concentration on Cabernet Sauvignon.

Although I love to visit my old time favorite wineries, at this tasting I focused those wineries new to me.

One winery stood out more than others, Somnium Wine Company. Perhaps the story behind the winery peaked my interest, especially today with women’s rights being in the forefront. The winery owner is Danica Patrick, one of the most successful women in car racing and a pioneer in the field. Somnium means to dream in Latin. For Danica, it is to follow your dream, which she did both on the racing front and again with her winery. With winemaker Aaron Potts on board, they were able to find the ideal spot for Danica’s vineyard. Somnuim owns 22 acres on Howell Mountain of which 7 acres were planted in 2011.

It is Somnium’s 2014 Napa Valley Cabernet Sauvignon that speaks out as an exceptional wine. Like Danica’s motto, this wine is a dream meeting all the qualities I like to see in a Cabernet. The wine’s superb balance, integration, and structure with flavors of blackberries make for a very drinkable wine that also can age with time.

Now in its 4th generation, S.R. Tonella Cellars has been growing grapes for over 100 years. Steve Tonella started the winery, and his first vintage was in 2010. I sampled the 2016 Napa Valley Sauvignon Blanc, which displays a grassy nose and tropical flavors. The 2014 Rutherford Cabernet Sauvignon, I thought was the best value for the price at the tasting. The wine is deep, rich and balanced with ripe fruit.

Howell at the Moon Winery and Vineyard

Anyone acquainted with me knows if there is a dog on the label, it draws my attention. In the case of Howell at the Moon Winery and Vineyards, the label and the winery name enticed my curiosity. Tysie, the winery dog plays an active role in the winemaking process including howling when the grapes are ripe and ridding the vineyards of unwanted small critters and varmints. With winery owner, Marc Cohen they achieve wines that bark right up my alley. Every wine I sampled were excellent from the soft undertones of the 2012 Cabernet Sauvignon, to the well-integrated 2013 Howell Mountain Cabernet Sauvignon to the sharper 2013 Mount Veeder Cabernet Sauvignon with its nice aroma of baking spices.

The Kenzo Estate vineyards flank the slopes of Mt. George. With Heidi Barrett as the winemaker, one knows the wines are exceptional. The 2016 Sauvignon Blanc, “Asatsuyu” is bright and balanced. Another bright wine is the 2016 Rosé “yui” composed of primarily Merlot, Malbec and Cabernet Franc. The Flagship Red Blend “rindo” 2014 combines Cabernet Sauvignon with Merlot, and Petit Verdot to create a very together wine with the potential to age over time.

Taking his family heritage for making wines in Hungary, Ralph Hertelendy takes a new outlook on making his wines for the current generation. Keeping with his family’s winemaking roots, Ralph often utilizes Hungarian oak in some of the wine he produces.

Established in 1989 in St. Helena, Vineyard 29 gets it name from its location 2929 St. Helena Highway, also known as Highway 29.  My favorites, the 2014 Aida Estate Zinfandel and the 2014 Vineyard 29 Estate Cabernet Sauvignon, showed promise. The Zinfandel rendered flavors of dark fruits especially blackberry and plum. The estate Cabernet also showcases the dark fruits but is illuminated with hints of chocolate.

Yount Ridge Cellars has a caption on their website that says it all for the 10-year old winery. “Character needs no pronouncement; quality does not seek fame. In the end, wine, like love and memories, speaks for itself.” Two wines stood out for me. First, the 2016 Sauvignon Blanc with its bright-understated demeanor and flavors of citrus and stone fruit. The 2014 Proprietary Red Blend, Oakville, which represents Yount Ridge’s interpretation of the Bordeaux blend. The latter is rich with flavors of raspberry, cherry, and hints of sweet florals.

One of my favorite Petite Sirahs comes from Relic Wine Cellars, and I love their second label The Archive especially the Carignane, but on this occasion, I sampled their Artefact Cabernet and the Ritual Blend. Integration is a forte of winemaker and owner, Michael Hirby, which also includes the bringing together of different terroirs. Ritual blends Mourvédre, Grenache, Syrah, Carignane and Petite Sirah to create a wine that showcases different terroirs in one wine.

Every wine tasted at Stars of Napa Valley was stellar in their own right.