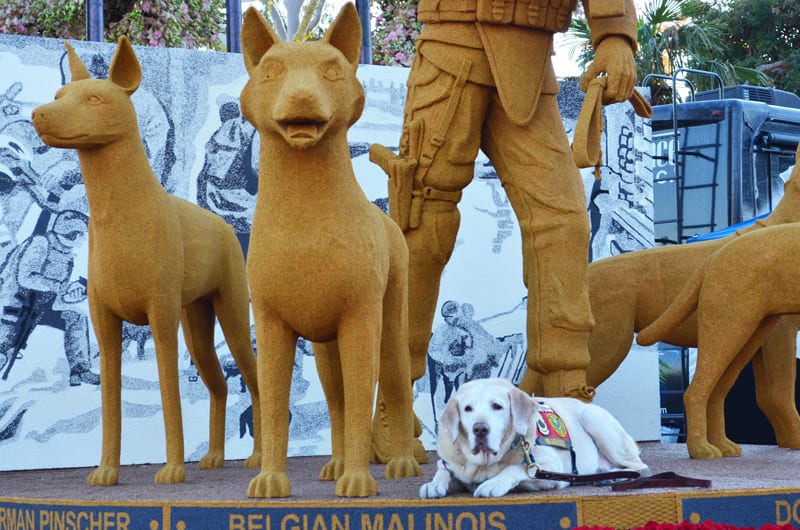 If you watched the Rose Parade on New Year’s Day, you probably saw the Canines with Courage float dedicated to military dogs. It was sponsored by Natural Balance Pet Food and modeled after the Military Working Dog Teams National Monument, scheduled to be dedicated in the fall. The float and monument honor American military dogs in World War II as well as the conflicts in Korea, Vietnam, Iraq, and Afghanistan.

After the parade, I went behind the scenes and interviewed the people involved in creating this float. I also met some of today’s military handlers and their dogs — and I got to see the massive bronze sculpture representing the working dog teams.

I was amazed by the passion I saw in John Burnam, a decorated war veteran, scout handler, and founder of the John Burnam Monument Foundation, as well as Joey Herrick, president of Natural Balance Pet Food. Both men worked hard to make this memorial come to fruition, each accomplishing their goals for the monument in their own ways.

“Riding on the float humbled me,” said Burnam, his eyes beaming with pride, “seeing people standing and clapping, the mass of people, was an experience that only happens once in a lifetime. I am honored to be part of this national monument.”

The completion of the bronze sculpture on Christmas Eve and the float in the parade on New Year’s Day represented a culmination of what Burnam has accomplished thus far. His military career began during the Vietnam War when he volunteered for the 44 Scout Dog Platoon. There he was united with Scout dogs Timber and Clipper, whose memories inspired him to move forward with the memorial.

During war times, dogs are used as scouts, sentries, and trackers and for search and rescue. Scout dogs like Timber or Clipper are trained to be alert to foreign sounds and smells. A scout dog works out in front of the patrols, the handler just behind, watching the dog’s body language at all times. Just behind are two bodyguards who protect the handler.

Right after the war, Burnam put his memories of the conflict behind him, but in 1991 he wrote a personal account of being a military dog handler. This book, Dog Tags of Courage, was followed by a second, A Soldier’s Best Friend. From this experience, in 2001, the idea of a national monument was launched.

As Burnam talked of his experiences in Vietnam, I heard the pain that he felt for his dogs and for all dogs left behind after the U.S. left the country. Military dogs are treated as equipment and were left behind. Some dogs were released to unfortunate circumstances. These handlers bond tightly with their dogs as they become best friends and partners. Leaving their working dogs and friend behind can be devastating.

Burnam was encouraged when, in 2000, President Clinton signed a bill permitting military dogs to be adopted. Today a military veterinarian approves the home placement of military dogs after they are retired from duty.

I asked why the monument was not on the placed National Mall in Washington, D.C., and Burnam said that, unfortunately, it does not meet the criteria for monuments to be placed there. When organizers could find no place near the National Mall, they decided to erect it at a military location, and what better place than Lackland Air Force Base in San Antonio, TX, the military training facility of all working dog teams.

This is an excerpt from an article I wrote for Dogster.

To read more About Military Dogs