Oregon Wine Month 2021 is the May celebration of all the Oregon Wine regions and the 725 wineries dispersed throughout the state. The state is the fourth-largest producer of wine in the United States, with the most popular grape varieties planted being Pinot Noir and Pinot Gris.

The Willamette Valley is the largest AVA, established in 1983, encompassing the middle of the state. It is composed of nine sub-appellations, including the two newest ones of Laurelwood and Tualatin. Pinot Noir, Pinot Gris, Chardonnay, Riesling, and Pinot Blanc grapes predominate in this area.

In addition, there is the Columbia Gorge, established in 2004 and cultivating an assortment of varieties. Walla Walla received its AVA designation in 1984, and the dominant grape varieties include Riesling, Chardonnay, Cabernet Sauvignon, Merlot, Syrah, Sauvignon blanc, Pinot Gris, Gewürztraminer, Cabernet Franc, and Viognier. Finally, the Snake River Valley AVA obtained designated in 2007 and primarily grows Syrah, Cabernet Sauvignon, Riesling, Merlot, Gewürztraminer, and Chardonnay. The Columbia Gorge AVA and the Walla Walla AVA cross the border into Washington State, as does the Snake River Valley AVA into Idaho. 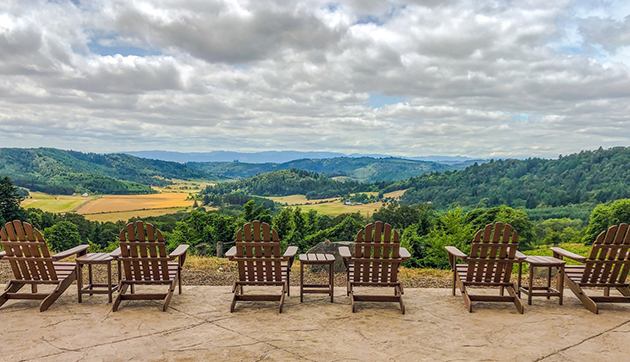 A couple of months ago, Oregon Wine put on a virtual tasting Oregon Unexplored, which explored some of Oregon’s AVAs. I thought it would be ideal to share some of the information during Oregon Wine Month 2021. In addition, I will share a few wineries that I recently discovered that deserve recognition during Oregon wine month. They represent the outstanding quality of wine produced in the Rogue Valley AVA.

Did you know that Oregon has over 1,297 wineries and vineyards? Here are some fun facts about Oregon Wine. The first estate winery is Hillcrest in the Umpqua Valley AVA, with grapes planted in 1961. Pinot Noir was first planted in 1965 by David Lett near Corvallis. The state has 82 varieties grown in vineyards across the state. Oregon wine accounted for 52% of the Demeter-certified biodynamic vineyards in Oregon in 2019. 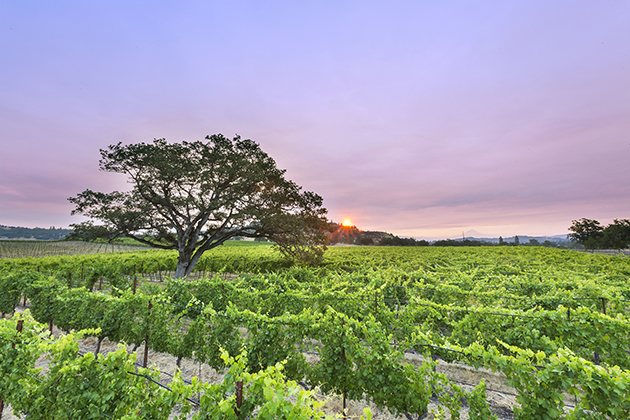 Speaking of Biodynamic, one of the forerunners in this field is Troon Vineyard. Located in the Applegate Valley AVA of the Rogue Valley, the winery is Demeter Biodynamic and Certified Organic. The idea is their wine is part of regenerative agriculture; they, as farmers, try to put everything back more than they take from the plants and soil. This process moves from the vineyard to the cellar, where they use a minimalistic approach to winemaking. This concept utilizes only native yeasts and avoids the use of new oak barrels. The ultimate goal is to make wines full of life and energy.

When the current owners, Denise and Bryan White, purchased the 100-acre property originally developed by Dick Troon in 2017, the vineyards were not healthy. Today with the help of a good management team under the helm of Craig Camp, replanting and biodynamics, a transition that started in 2016, the 55 acres of vines are healthy and producing grapes that create vibrant wines.

The Kubli Bench, a part of the estate, is a plateau above the Applegate River. Its soils consist of river and ocean sediments. The vineyards sit at a 1500 ft elevation, where breezes come through midday, and the area gets 10” more rain than other parts of the Rogue Valley. In this area, the grapes produce wine with higher acidity and lower alcohol.

Besides growing grapes, Troon Vineyard has two acres planted with 20 varieties of apples. These are also cultivated biodynamically and used in Troon’s ciders.

Troon Kubli Bench Amber: Find a very unusual lively blend of Riesling, Vermentino, and Viognier. The grapes for this wine are farmed and processed like red wine by fermenting on the skins giving the wine its orange color. This blend creates depth, complexity, and layering in the wine. Flavors of oranges and lemons prevail and accented with hints of savory spices.

Troon Kubli Bench Rosé: At the time of this tasting, the blend for this Rosé combined Tinta Roriz, Primitivo, and Grenache. Today it combines just the Tinta Roriz and Primitivo. The grapes are farmed for Rosé and whole cluster pressed before fermenting in barrels. This elegant wine delivers a very dry, sophisticated Rosé with flavors of red currant and orange peel.

Troon Côtes Du Kubli Rouge: This wine consists of Syrah and Grenache. Each variety ferments separately. With a lovely nose of florals, red fruit, and accented and cinnamon, the Syrah gives the wine its complexity and the Grenache roundness. One finds an elegant wine with flavors of dark fruit, herbs, and spices.

Cliff Creek Cellars is a family affair. The family purchased the property in the 1990s when Vern Garvin decided he must try his hand at yet another project. Now in its second and third generation, the winery excels at creating red wine from their Sam’s Valley Vineyard.

Sam’s Valley Vineyard consists of 70 acres located just northeast of Gold Hill, Oregon. Planting began in 2000 and now has 20 acres of Syrah, 20 acres in Cabernet Sauvignon, and a mix of Cabernet Franc, Merlot, and Sangiovese.

The winemaking team for Cliff Creek is Herb Quady and Brian Gruber. Although Cliff Creek is located in the Rogue Valley, they have two tasting rooms, one at the vineyard in Gold Hill and the other in Newberg in the heart of the Willamette Valley.

Although Clifford Creek produces white wine, my tasting with Ruth Garvin concentrated on four red wines. Of those wines, the Claret and Syrah are their flagship wines.

Cliff Creek Cellars 2015 Syrah: This Syrah is created in a Southern Rhone style. The wine ages 20 months. On the nose, find floral aromas and notes of blueberries. On the palate, I found a fruit-forward wine with lots of structure and flavors of blueberry followed by hints of white pepper on the finish.

Cliff Creek Cellars 2015 Cabernet Franc: This wine ages 17 months in barreled followed by another year of bottle aging. Discover a fruit-forward Cabernet Franc with depth, structure, and complexity. This wine is youthful with earthy aromas and flavors of cherry, tomato, and dried herbs.

Cliff Creek Cellars 2015 Sangiovese: After aging for 22 months in French oak, this wine presents us as a balanced, ripe, and elegant Sangiovese. I found it light and fruity with flavors of cherry with hints of smoke and earthy qualities.

Cliff Creek Cellars 2015 Claret: By far my favorite of the Cliff Creek wines, the composition of this Claret consists of Cabernet Sauvignon, Cabernet Franc, and Merlot. It ages for 18 months and showcases a balanced wine with dark fruit, spice, and vanilla.

During Unexplored Oregon, we sampled about five wines from a variety of the AVA. What better time to share about these wine and their AVAs than during Oregon Wine Month.

Since my last visit to David Hill, several things have changed. First David Hill is now located in a new AVA, Tualatin Hills, established in 2020 and defined by Kinton, Cornelius, and Laurelwood soils. The year before, 2019, Chad Stock became their winemaker.

One of David Hill’s name to fame is it houses some of the oldest vines because one of the pioneers of Oregon wine, Chuck Coury, snuck cuttings in a suitcase from Alsace and planted them in 1965 on the property. These included, Pinot Noir, Gewürztraminer, Sylvaner, Semillon, Pinot Blanc, and Riesling. The majority of these vines still exist.

Winemaker’s Cuvée Pinot Noir 2019: This Pinot Noir combines clones Wadenswil, Pommard, and 667. The grapes are dry-farmed. There is no stem inclusion during the winemaking process, which adds to the freshness of this wine. The wine ages 15 months in 20% new French oak. I found an elegant wine with bright acidity with florals, on the nose and pomegranate, on the palate. 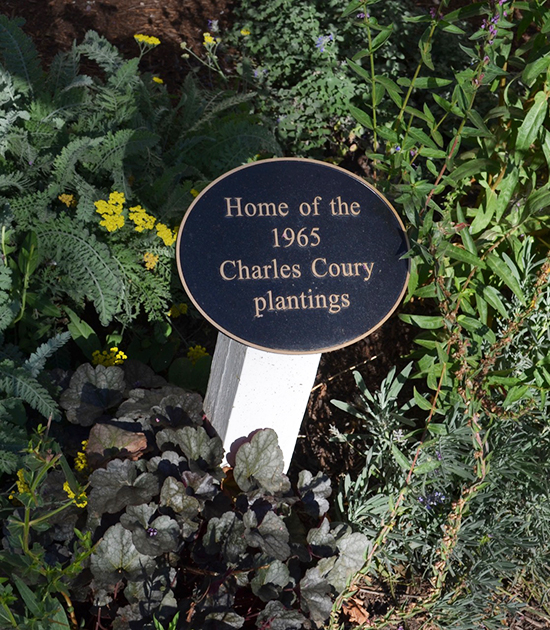 Although Walter Scott sources grapes from several AVAs, most of the grapes come from the Eola-Amity Hills AVA. The AVA was established in 2006, and its name represents Aeolus, the Greek God of the winds. In this AVA, the winds enter this region from the Pacific Ocean through a gap in the Oregon Coast Range called the Van Duzer Corridor. These winds bring the maritime climate inland. The soils range from volcanic basalt to sedimentary sandstone and were brought there by the Missoula floods via the Columbia Gorge.

Walter Scott 2018 Chardonnay, Seven Springs Vineyard: The grapes for this Chardonnay are organically dry farmed. The grapes go through malolactic conversion, fermenting, and aging in 500 and 350-liter barrels for 12 months, 40% new oak, followed by three months in stainless steel. On the nose, one finds scenva.ca ts of lemon curd and orange peel. The wine reveals citrus character accented by a bit of salinity. 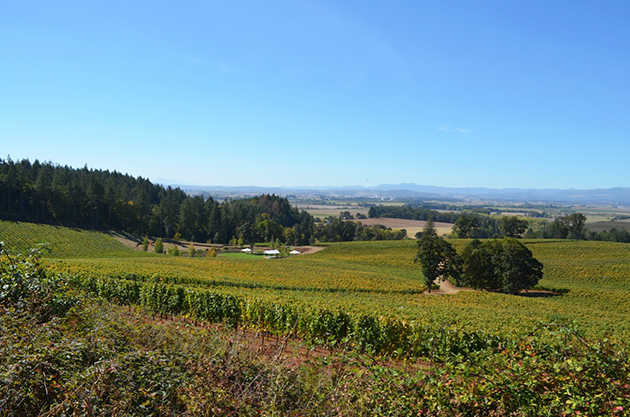 Like Troon and Cliff Creek Cellars, Valcan Cellars lies in the Rogue Valley. The Rogue Valley’s closeness to the Cascades and Siskiyous creates a rain shadow effect causing moderate precipitation throughout the year. The Rogue Valley is dry compared to those wine regions located closer to the coast.

The soils vary throughout the AVA and include metamorphic, sedimentary, volcanic, sandy loam, and hard clay. These different soils type allow for many varieties.
Owner/winemaker Juan Pablo Valot comes from Mendoza, Argentina. His Argentine roots play a role in his winemaking. Juan has worked at wineries both in Oregon and Argentina before starting his winery.

Valcan Cellars 2015 Syrah: I found a full-bodied rich and balanced with flavors of dark fruit accented by pepper on the finish. 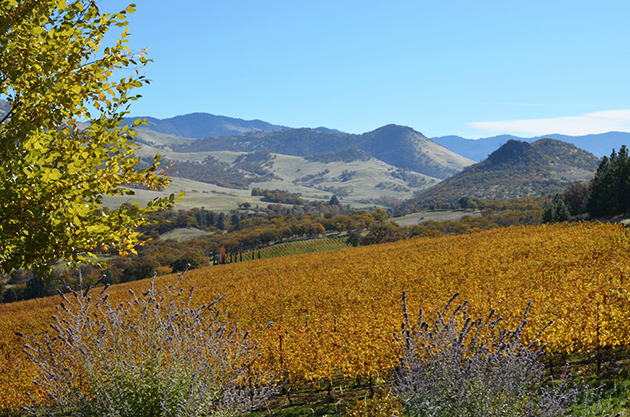 Rasa Vineyards is located in the prestigious Rocks District of Milton Freewater within the Oregon side of the Walla Walla AVA. The area is known for its coarse-grain alluvial sediments, similar to France’s Chateauneuf-du-Pape.

Veritas Sequitur Syrah 2016: The wine sees whole cluster and native fermentation, followed by 30 months in 100% new French oak. The wine is fruit-forward with floral aromatics, especially lavender. I found an elegant wine that wows your palate. The flavor profile consists of dark fruit, dark chocolate with hints of savory notes, and white pepper on the finish.

Analemma represents the Columbia Gorge AVA. The region lies east of Mount Hood and Mount Adams. The AVA lies in the rain shadow of the Cascade volcanos, which like the Rogue Valley, allows for diversity in the varieties.

The winery lies in the Mosier Hills and utilizes biodynamic practices with the ultimate goal of producing a wine that reflects a sense of place.

Analemma 2018 Mosier Hills Grenache: The grapes see 35% whole cluster fermentation. The Grenache ages in both concrete eggs and 600L Neutral oak for 15 months. I discovered a very vibrant Grenache with lively aromas of cinnamon and lavender. The wine exhibits flavors of strawberry and cherry accented with fennel, licorice, and cinnamon. 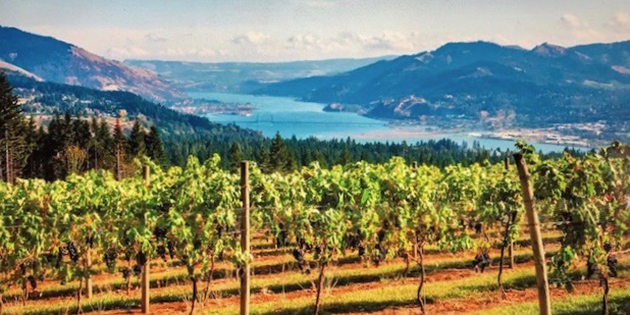 Columbia Gorge AVA. Photo Courtesy of David Lloyd and the Oregon Wine Board

Over the years, I have come to appreciate the wines of Oregon.  I have learned so much visiting the region and look forward to returning to discover more of the wines that make each AVA unique. From the Walla Walla to the Willamette Valley, moving south to the Rogue Valley, you can explore some exceptional wine.