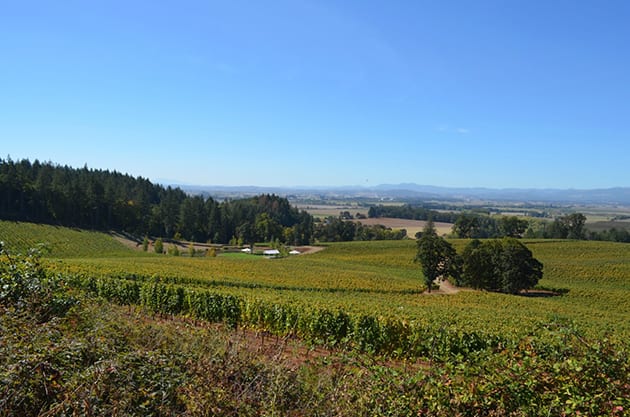 Recently while on a wine adventure to the Willamette Valley, I explored wineries in several of the seven Willamette Valley AVAs. There are enough wineries in each appellation for a weekend escape to each one. This article focuses on the Eola-Amity Hills AVA, including things to do in the surrounding vicinity other than wine tasting.

The Eola-Amity Hills AVA encompasses two counties Polk and Yamhill and includes the cities of Amity on the north and Salem on the south. Established in 2006, the AVA is named after Aeolus, the Greek God of the winds. The winds in this region come from the Pacific Ocean through a gap in the Oregon Coast Range called the Van Duzer Corridor. These winds bring in a maritime climate. The soils range from volcanic, basalt to sedimentary sandstone that was brought there by the Missoula floods via the Columbia Gorge.

Each winery offers a unique take on the Eola-Amity Hills AVA terroir.

The name Illahe means earth, place, or soil, and that best describes the concept of this winery. It is about the soil. The philosophy is natural and pure and includes dry farming the vines once they are mature and using a pair of Percheron, French draft horses to mow and bring the grapes to the winery during harvest.

An old-world charm exudes from this winery. Perhaps it comes from the draft horses used on the property or the philosophy of making wine by hand without enzymes or additives. Maybe it is because they use gentle wooden basket presses and age their wines in French and Oregon Oak. Illahe produces one wine without the use of electricity. All these aspects unite together to create a unique experience and outstanding wine.

While many age-old techniques are used modern elements factor into Illahe’s production with sustainability being at its core. The winery, although very modern utilizes gravity flow, solar power and harvests rainwater for the drier times of the year. Illahe is Live Certified, Salmon-Safe, and part of Oregon’s Deep Roots Coalition.

Both owners Lowell and Pauline Ford come from family roots in farming. Lowell’s grandparents grew grapes in Dallas, Oregon and Pauline’s family owned the farm where they reside today. Before gravitating to growing grapes and making wine, both Lowell and Pauline were teachers at the community college. In 1983 Lowell experimented with growing Müller-Thurgau. The rest is history as the Ford’s began planting their 80-acre property in 2001. Today they grow Pinot Noir, Pinot Gris, Grüner Veltliner, Tempranillo, Lagrein, Schioppettino, and Teroldego.

Grüner Veltliner, Pinot Gris, and the 1899 Pinot Noir. The later is made without modern winemaking equipment or electricity from start to finish, including the delivering to their distributor. This Pinot Noir truly is a hands-on project that gives an even greater sense of Illahe’s terroir.

Carrying on the dream of her brother Jimi Brooks represents the focus of Brooks Wines. A native from Portland Jimi was dedicated to taking a holistic approach to growing grapes and making wine. Unfortunately, he passed away at 38, but his sister Janie Brooks Heuck carried on his wishes with the help of a close friend and now Brooks winemaker, Chris Williams with the intention of saving winery for his at the time 8-year-old son Pascal. With Janie’s tenacity and love for her brother and family that makes this winery what it has become. Today Jimi’s son, Pascal, plays a  part of this legacy because he too was ingrained from a young age with the passion for creating wine.

Founded in 1998 Brooks specializes in Riesling and Pinot Noir. Situated on 20 acres, the winery became certified Biodynamic from Demeter in 2012 and the tasting room opened in 2014.

Winemaker Chris Williams owes his career in winemaking to Jimi. Continuing that legacy translates into the seamless wine that Brooks offers. Jimi and Chris met over motorcycle parts but soon became friends and winery co-workers. Jimi and Chris worked together until Jimi’s death in 2004.

With nineteen different Rieslings, Brooks allows the wine enthusiast to understand the nuances of this variety. Each is excellent in its own right.

Amycas is an aromatic blend of Riesling, Gewürztraminer, Muscat, Pinot Blanc, and Pinot Gris. Amycas means amicable, and this flavorful Alsace style blend integrates its composition superbly with aromas and flavors of citrus and flowers. My Riesling favorites were Bois Joli Riesling with its vibrant, youthful expression and Sweet P with its medium sweet demure.

The Eola Hills Wines Cellars was the dream of then agricultural insurance specialist, Tom Huggins. Starting with a 35-acre wheat field in approximately 1982, Tom has expanded his empire to 325 acres, making Eola Hills Wine Cellars the largest locally run winery in Oregon. In 1986 production consisted of 1,500 cases while today the winery produces 80,000 cases a year. The vineyards are both sustainable and dry farmed.

Eola Hills Wine Cellars consists of six vineyards in the southern portion of the Eola-Amity AVA. I visited the largest of the vineyards, Legacy Estate. Inside the vineyard is the Fossil Block, an area composed of Oligocene-era marine fossils found in rocks. The grapes in this block are different than other portions of the Legacy Vineyard because the soil’s composition has less acid, higher elevation, and southwest exposure. The Van Duzer Corridor brings in the maritime winds causing diurnal swings in temperatures from morning to night. These breezes are ideal for growing Pinot Noir, Pinot Gris, and Chardonnay.

Steve Anderson is the general manager and head winemaker. While starting as a cellar rat in 1993, he has moved his way upward from assistant winemaker to his position today.

A visit to the Legacy Estate Vineyard essentially tells everything you need to know about Eola Hills Wine Cellars. The difference in elevation throughout the vineyards gives some of the most magnificent views of the Eola-Amity Hills Valley.

Fossil Block Pinot Noir delivers a very feminine elegant wine that ages in both French and American oak with 30% being new oak.

Founders Paul and Eileen Gerrie established their winery in 1992 with an inherent quest of respecting the land, its vines and the natural winemaking process. Named Christom after each of their children, Chis and Tom. Currently, their son Tom has taken over all aspects of winery production and continues their philosophy of producing primarily Pinot Noir. The winery and vineyards are sustainable LIVE certified. They practice using biodynamic concepts without being certified. The property consists of 240 acres of which 105 are planted with Pinot Noir, Chardonnay Viognier and Syrah. The Pinot Noir vineyards are named after the matriarchs of the family, Louise, Marjorie, Eileen, and Jessie.

Although in the Eola-Amity AVA, the Van Duzer Corridor influences the temperatures from morning to night in the Cristom vineyards. The soils are volcanic, both deep and shallow. Cristom treats every block separately.

The Pinot Noir sees whole cluster fermentation. Cristom utilizes native yeast and ages a minimum of one year in the barrel.

Today Cristom produces 17,000 cases a year with winemaker Steve Doerner at the helm.

Both the Louise and the Eileen Vineyard Pinot Noir merit mention.

The winery is located on a stunning piece of property. With captivating views, this winery is the ideal location for a wedding. Originally a dairy farm, it became O’Connor winery in 1982. In 2002 Tim and Kari Ramey purchased the property. Eighty-three of the 133 acres property are planted with Pinot Noir, Chardonnay, Auxerrois, Pinot Gris, Tempranillo, and Pinot Blanc. Sustainability is at the root of Zenith’s growing philosophy. They are LIVE certified. Zenith primarily sells their grapes to 22 other wineries. They produce about 1000 cases of wine a year. As of 2018 Ehren Jordan became Zenith’s winemaker.

Visiting this winery and tasting the wines is by appointment only.

Auxerrois, which is a white variety originating from the Alsace region, delivers lots of florals yet has many earthy qualities.

The Oregon Garden Resort in Silverton offers a rustically charming setting in a very relaxing environment. The hotel is pet-friendly for those inclined to bring their dogs along. The grounds are ideal for taking a leisure stroll with or without your dog.

The rooms are nicely appointed and comfortable. My room overlooked a tranquil wild garden setting.

Visit the town of Silverton. This quaint town merits a stroll to discover their murals, one of which tells the story if the town’s mascot, Bobbie the Wonder Dog, a Scotch Collie, who got lost on a family trip in Illinois and traveled 2251 miles back to Silverton to find his human family in the 1920s. Also walk along the creek and step inside one of the few covered bridges in Oregon, Gallon House Bridge.

Nearby to Silverton, one finds Silver Falls State Park with its famed Trail of 10 falls. If you are a lover of waterfalls and Silver falls is not enough, nearby discover another five other major waterfalls, Abiqua, Upper Butte Creek, Lower Butte Creek, Drift, and Fall Creek. Each one accessible through back roads and hiking trails.

Next, to the Oregon Garden Resort find the Oregon Garden, an 80-acre botanical garden. In fact, there is a back way into the gardens from the hotel. Oregon Garden consists of 24 spectacular specialty gardens. It is quite a site to see at any time of the year.

For Frank Lloyd Wright buffs, also adjacent to the Oregon Garden is the Gordon House. The Gordon House is the only building design by Wright in Oregon and also the only one open to the public in the Pacific Northwest. The house represents what Wright called a Usonian style farmhouse. Wright used this term to describe his vision of the character of the American landscape as unique and free of previous architectural conventions.

In conclusion, Eola-Amity Hills offers many gems to tantalize your senses of sight, taste, and smell.

Note: Common to the wine and travel industry, this writer was hosted to this winery visits and accommodation. While it has not influenced this review, the writer believes in full disclosure.