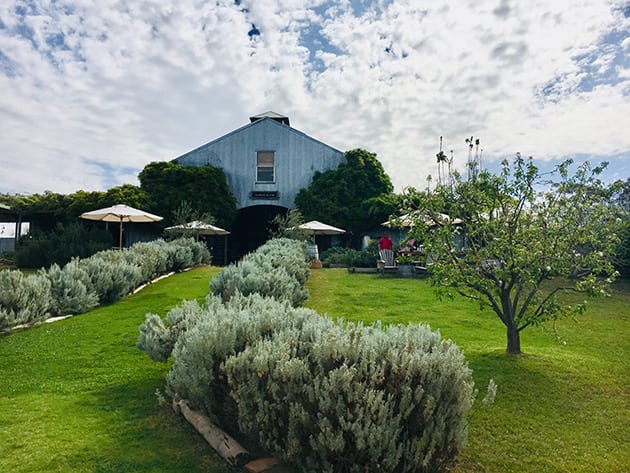 On my recent trip to Australia, I spent 2 1/2 weeks visiting about six cities and three wine regions, including Mudgee. Kind of like a pig in, you know what- immersed in my element because I live for wine, travel, and food. I attended the Wine Media Conference for the first time, and its first time held outside of the U.S. Boy was I glad I did. I was impressed with the glory of user-friendly Sydney – it’s magnificent coastline, beaches, and cityscape; the immense friendliness and smarts of its people; the sophisticated culture, including food, wine, and architecture. And you can walk or ferry everywhere super easily!

I was inspired to share at every turn, but someone that I immediately want to tell you about is David Lowe of Lowe Wines. The land that he and his wife caretake, in the best sense- vineyards, restaurant, cellar door, (down under for tasting room), so impressed me that I want to share right away. Lowe Wine is located in a wine region called Mudgee, which I will write more about very soon. Mudgee is about a 3-hour drive NW of Sydney. Here’s my interview with David about his organic and biodynamic winery.

Beth-Ellen: You have an interesting trajectory/story of your path into winemaking – specifically organic/biodynamic viticulture. I know that you were inspired by French winemakers and the time that you spent in France. Will you talk about that?

David Lowe: I had the privilege when I first started making wine in 1979 of tasting 20 of the best wines in the world with my company chairman/President and also my mentor.

Nine of them were Demeter, organic, or Biologique. Naturally, I was impressed, so it raised my interest.

I met with Gerard Jaboulet, ( La Chapelle and Chevalier de Sterimberg Hermitage), in France and he helped with some enthusiasm. Basically, it was to make the great wines of the world; this was a useful tool to achieve that objective.

BE: What have been your largest successes and obstacles in regards to organic/biodynamic winemaking?

DL: Practical help and a network of like-minded professionals who have some experience. My greatest help has come from imports; Joacquim from Holland, Morgan from Canada, and Etienne from France. All three have worked for me in various ways and improved the process and my understanding.

Joacquim came from Holland, and he was a biodynamic, trained winemaker.

He was with me for two years, and we called him the energizer bunny (battery attached to his back).

He was most helpful with the scientific side of the preparations for biodynamics.

Morgan was from Tause winery, in Canada and she was another energizer bunny.

Her great skill was with the timing of the calendar and putting down procedures for other staff to interpret. We still use most of her records.

Etienne has a feel for harvest dates and optimum ripeness from the biodynamic calendar. He had a good experience in the Rhone valley.

BE: Your wife, Chef Kim Currie, of The Zin House, on the winery property, sources her produce outside the door from her organic/biodynamic garden. The proof of the success of the garden is in the taste. Did she precede you in farming methods?

DL: No, she developed The Zin House, and with our joint discussions, we are using principles of Biodynamics to lift quality. We have a long way to go, but it has become a major priority for us. We aren’t too keen to advertise it as it’s a method of improving agriculture, not a fashion – marketing opportunity which seems to be happening in Australia a lot.

BE: Did you start the vineyards/winery from scratch, or did you buy an existing farm/facility and have to convert to organics?

DL: I inherited the farm and converted the vineyard and farm to organics in 2003 and biodynamics in 2011. Official certification occurred in 2006/2007.

BE: How do you believe that organic/biodynamic effects the outcome of your wines?

DL: Texture, concentration, mouthfeel. The process means less interference in growing and winemaking, so the wines have a lasting flavor that is thicker, with plenty of power to improve and be latent. Less preservatives fewer adjustments, more trust in the fruit you are growing. Yes, its trust in your crop that it will deliver the best it can.

BE: Have you had to make modifications in the vineyard, the varieties grown, or winemaking methods, due to climate change?

DL: Yes, I have, for the first time, watered the vineyard, and have done so in August (end of winter). I do this by pumping water in a little trench, which drains down the roots, which are very deep (greater than 6 feet). This change is enough water for the season. Future vineyards will contour plant to harvest rainfall as it is likely to fall in storms with greater velocity and less infiltration. By contours, you reduce erosion and keep the water to drain into the soil.

I encourage any wine and food lover to find out more and consider a trip to the Mudgee Wine Region in Australia, and while there, include a visit to Lowe Wines.

Look for an upcoming follow-up article on Mudgee Region.