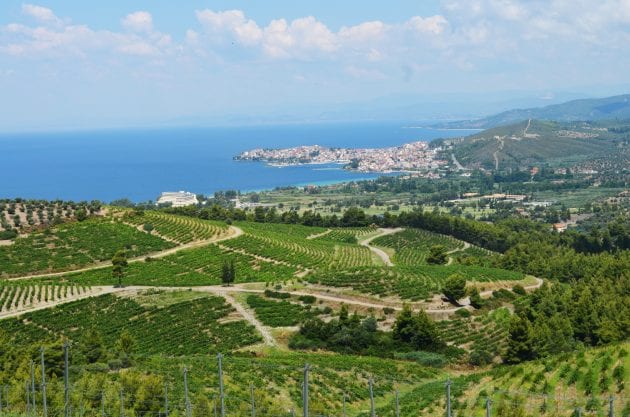 When one thinks of traveling to Greece, they typically envision visiting Athens, the Greek Islands, including the Peloponnese, and Santorini. Rarely do they foresee going north along the coast into Macedonia and beyond where one finds a hidden gem of a resort called the Porto Carras Grand Resort.

Porto Carras lies along the Sithonia Peninsula. This peninsula is one of three that make up the Halkidiki Peninsula, which runs from the city of Thessaloniki south to the Aegean Sea and is shaped like a hand with three fingers. Sithonia is considered the middle finger.

This family style resort is more than just a seaside getaway; it is also located in its own wine appellation known as Domaine Porto Carras and produces a plethora of marvelous Greek wines.   The winery sits atop a hill on the slopes of Mount Meliton and affords magnificent views of the Greek coastline.   The resort becomes the perfect escape for wine lovers because one not only enjoys the exquisite views, basks in the Grecian sun but also gets to sample the excellent wines from some very old and historic varietals while watching the sunset along the Sithonian coast.

The resort features of two hotels, the Meliton, which houses the resort’s casino and the Sithonia, the Marina Village, and Yacht Club and an 18-hole golf course.  High above sits Villa Galini.  The resort is like a town of its own.  Once you arrive, one does not have to leave for anything.

The guest suites at Porto Carras are spaciously comfortable with a European flair.  Each room has a balcony with most overlooking the beaches, the ocean, or the marina.

There is a pool, Thalassotherapy, and Spa Center at each hotel and several beaches to choose to swim or sunbath. Neos Marmaras, the local village and is reached by car or boat shuttle from the Porto Carras Marina.  Both the hotels and marina offer a wide selection of restaurants to choose from, each offering different cuisines.

For the best vantage point, a visit to the Villa Galini offers the most spectacular view of the coastline and Turtle Island.    Originally a monastic property until the late 1960s when shipping magnate, Giannis Carras purchased the property after falling in love with the beauty of Sithonia coast during a cruise to Mt. Athos. Perhaps in keeping with the properties religious origins, he built a Mediterranean style villa that is reminiscent of a monastery.   Today the Villa is used as a hotel or for weddings.

There are 1100 acres of terraced vineyards, which make it ideal for growing Bordeaux varietals in addition to the Greek varieties. The vineyards were planted in 1965, and the first vinification occurred in 1971.   In 1999 its current owners purchased the vineyards.

The profile of the region, the climate, and terroir with its chalky and schistose soils ensure the vineyards are virtually free of many of the diseases found in other areas. The climate, one with intense sunshine, is countered by cool ocean breezes from the Aegean Sea. With its location on the slopes, you find diurnal temperature variation from day to night. This difference tends to slow the ripening process and lead to more acidity and character in the grapes. Organically grown the grapes used for the Domaine Porto Carras wines utilize dry farm irrigation.

Twenty-seven varietals grow in the Porto Carras Vineyards.  Those include thirteen French varieties and also fourteen native to Greece. Some of those varietals are Assyrtiko, Athiri Malagouzia, Limnio, Roditis, Merlot, Cabernet Sauvignon, Cabernet Franc, Cinsault, Chardonnay, Sauvignon Blanc, Viognier and Syrah.  The Malagouzia is one of the most ancient white varietals and was almost extinct until Domaine Porto Carras revived this grape.  At the same time Limnio, one of the most ancient red varietals has made a comeback through the winery’s efforts.

The winery’s tasting room is one of many stops on the resort’s tram itinerary as it circles the property.

Finally, one cannot go wrong choosing to vacation at the Porto Carras Grand Resort.   The hospitality and service are impeccable and will make your visit your dream vacation.

Note: Common to the wine industry, this writer received hosted wine tastings, meals, and accommodations. While it has not influenced this review, the writer believes in full disclosure.