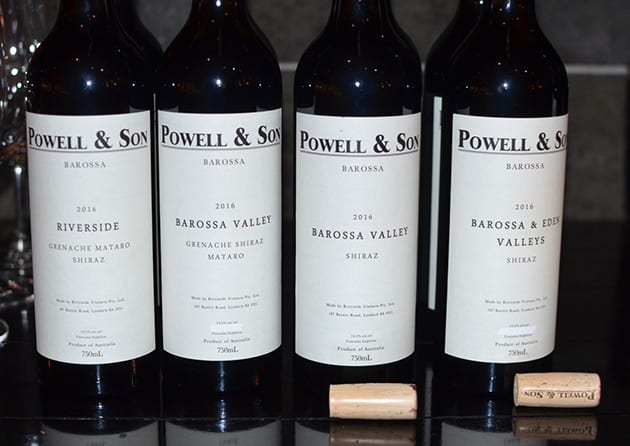 Sometimes we go to a tasting and say wow these are the best wines I have tasted from a particular region. Such was the case recently when I sampled the wines from Powell & Son, a winery located in the Barossa Valley Australia. I found the wines exceptional and the most outstanding I have ever tasted from Australia.

I was privileged to attend a small tasting at the Bazaar. Chef Holly Jivin paired the wines superbly to her cuisine, but it was the wines that spoke out and took the spotlight for this luncheon.

The wine not only stands out but shows the love of a father and son and the teamwork they achieve, making these marvelous wines. Their inspiration comes through with each sip of wine.

The team is David and Callum Powell. David, by nature, speaks his mind and holds nothing back. The same is true of his wines. His wines are powerful yet elegant. You could also say David knows his grapes.

David is a trailblazer in the Barossa Valley. He came to the area in the 1990s and worked at some of the top wineries in the area. In 1994 David helped co-found Torbreck. Five years after he parted with Torbreck, David and his son opened Powell & Son.

David’s love of Rhone Valley and the wines produced in this French region brought him to the Barossa Valley. The Barossa Valley is located in South Australia just northeast of Adelaide. One finds ancient dry-farmed Shiraz vines in this area. Many of these vines are the oldest in the world. Other varieties grow well in the Barossa Valley include Grenache, Cabernet Sauvignon, Riesling, and Semillon. David works with Grenache and Riesling in addition to Mataro, which many of us know as Mourvédre.

David and Callum manage all the vineyards they lease except where they purchase their Roussanne and Marsanne. The latter are grown biodynamically, whereas the others are farmed organically. With a minimalist approach to winemaking, they utilize traditional techniques with their wines. For them, the grapes tell a story of the place. The fruit vinifies in concrete fermenters with pump-overs and basket pressing. With the blends, there is no co-fermenting.

Although they make a Riesling, I only sample the Roussane Marsanne.

2017 Roussanne Marsanne, Barossa Valley: I found a bright well-integrated wine with flavors of lemon and pear. On the nose hints of oak were evident by the yeasty brioche-like aromas that mixed with floral accents.

The Roussanne Marsanne was paired with appetizers. My favorite, the Jicama Guacamole because the Jicama was sliced thin and used as a taco shell. The presentation made the food even yummier.

The second course of wines was complemented with Cinco Jontas Bellota Platter with Tomato Bread and Beef Tartare. Again, the presentation of the tartare was unique for this dish.

2016 Riverside, Grenache, Mataro, Shiraz: I found a light, bright, and lively yet very drinkable wine. The grapes for this wine come from 25-year-old vines. The wine is a bargain and priced reasonably priced under $20. The quality is exceptional based on the price.

2016 Grenache, Shiraz, Mataro Barossa Valley: This wine exhibits more depth, texture, and structure compared to the Riverside. This wine features vines of about 50 years old. One finds dark fruit on the palate.

2016 Shiraz Barossa Valley: This Shiraz is an example of a wine produced from 25-year-old vines.

2016 Shiraz, Barossa Valley & Eden Valley: This was my favorite wine of this flight. The Eden Valley has sandier soils. The combination of the two vineyards makes the wine more elegant and refined.

These wines showcase single vineyards in the Barossa Valley. Because the wines come from a single vineyard, they exhibit more depth and structure than the first flight of wines. They also exemplify the prowess and passion of David, his son, and their winemaking style.

2013 Grenache, Brennecke, Barossa Valley: The first words out of my mouth with this wine were, “Oh my God” because this is an incredible wine. The grapes come from an extraordinary vineyard planted in 1901. The wine is bright with nice spice.

2016 Shiraz, Krache, Barossa Valley: The grapes for this wine come from a 70-year-old vineyard. The wine ages 18 months in used oak barrels.

2015 Shiraz, Krache, Barossa Valley: This vineyard lies in the western portion of the Barossa Valley and features grapes from 110-year-old vines. The wine, one of my favorites, is more elegant with dark fruit flavors.

2016 Shiraz, Krache, Barossa Valley: This wine is similar to the 2015 but was tighter due to its age. It will be interesting to see how this wine develops in another year.

This flight was paired with assorted bonbons.

In this flight, we did a vertical from a single vineyard known as Steinert. We sampled three wines. The vineyard is 135 years old. All three wines displayed wonderful hints of baking spice against a backbone of dark fruit.

I conclude by saying that Powell & Son create primo wines, which is also evident in the consistency of all their wines. This winery represents the best wine, let alone the most outstanding Shiraz I have ever sampled from Australia. These wine are stellar, in my opinion.

Note: Common to the wine industry, this writer was hosted to the wine sampled and the luncheon. While it has not influenced this review, the writer believes in full disclosure.