I first sampled Primus wines in 2016 while under the stewardship of a different winemaker. At the time, I sampled the 2014 vintage of The Blend and the Cabernet Sauvignon. It is interesting to see how a winemaker’s influence makes a difference in the wine and its style. I could see the difference in these Chilean wines from both the Colchagua Valley and the Maipo Valley, where Primus cultivates the grapes for these wines.

The Primus label is one of several brands from Viñedos Veramonte. The label has evolved over the years to an almost mosaic-like emblem representing the P for Primus.

Primus was founded 20 years ago with the idea of exploring Chilean organic farming practices in Apalta and Maipo with a primary focus on the Cabernet Sauvignon and Carménère varieties.

The Apalta Vineyard in the Colchagua Valley is the location of the Primus vineyards. Soils consist of old Alluvial River beds. Both the Andes and Coastal mountain ranges influence the vines because the convergence of these two ranges forms a half-moon of mountains that protects the vines. Most of the vines are over 100 years old – with minimal intervention and deep roots that are fostered by the mountainous areas, volcanic soils, and the silty soils from the river beds. This vineyard is known for its elegant, balanced wines.

The region is known for its Cabernet Sauvignon. Some of the best Chilean Cabernet Sauvignons utilize grapes from this Maipo Valley. Primus grapes come from the Alto Maipo Vineyard. This vineyard lies south of Santiago at the base of the Andes Mountains. One of Chile’s most important rivers runs through this area, the Maipo River. The river has flooded three times throughout history. These floods created three alluvial terraces similar to those in Bordeaux. The Primus Vineyards are located on the third terrace. Here the growth of Cabernet Sauvignon grapes is restrained. This factor creates an elegant, balanced, and concentrated wine.

Today, winemaker Sofia Araya is at the helm. She was born and raised in Chile. While she was in college, she was the winemaker at Casa Lapostolle in Apalta – Colchagua Valley.
After graduating from the Universidad de Chile, Sofia worked for four years at Luis Felipe Edwards in the Colchagua Valley. Next, Sofia worked a stint at Aresti Vineyard in Curicó Valley. In 2009, she became the Assistant Winemaker at Viñedos Veramonte. You might say she was destined to work in the Colchagua Valley, in addition to the Maipo Valley. As Primus changed its focus to farming and winemaking organically, it was natural because Sofia was already involved with these practices. She now leads the winery’s organic project.

Sofia’s style brings an elegance and softness to the wines, which makes them very drinkable. 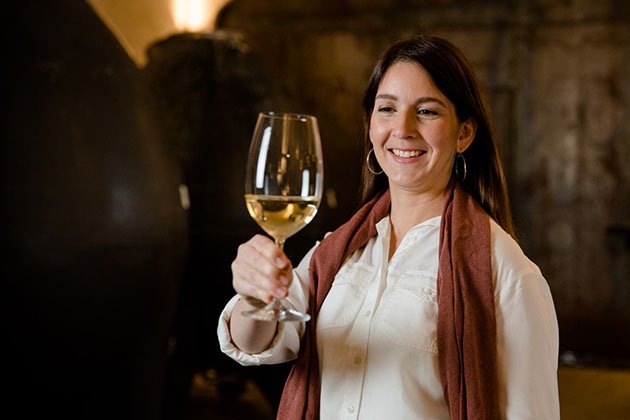 Primus Wines in the 2014 vintage

Like the current wines I just sampled, Primus also utilized organic principles for the 2014 vintage. I found those wines a bit heavy in texture and complexity than the 2017 and 2018 vintage, thus showing the difference between winemakers.

At the time, I wrote that “The Blend imbues earthy aromas of leather and tobacco. The wine exhibited flavors of dark stewed fruit, prunes, cherry, licorice, mocha, and tobacco. I found a velvety wine that definitely could stand some aging in the bottle.” For the Cabernet Sauvignon, I said, “the Cabernet Sauvignon is a very full-bodied wine with a nose of tobacco and leather, exhibits dark cherry and white pepper flavors.”

Primus Blend 2017 Apalta – Colchagua Valley: This wine blends Cabernet Sauvignon, Carménère, Petit Verdot, Merlot, and Cabernet Franc. You might say this is a Chilean interpretation of a Bordeaux blend. As noted by Primus, “Cabernet Sauvignon is the basis and provides structure. Merlot adds red fruit and vitality to the palate. Carménère delivers density and smoothness, combined with the soft and complex finish of the Petit Verdot. Cabernet Franc adds elegance and persistence.” One-third of the wine aged for 12 months in foudres, while the rest of the wine aged in French oak with 18% new.

My first impression was that I could taste and smell the Cabernet Sauvignon. Of the three wines I sampled, this wine was bigger and bolder. I found an earthy, fruit-forward wine with blackberry flavors and a spicy finish with hints of black pepper. 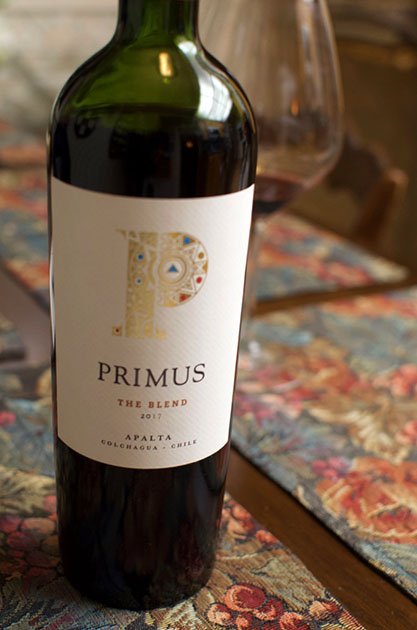 Primus Cabernet Sauvignon Maipo Valley 2017: This Cabernet represents grapes that come from old Maipo river terraces with well-drained alluvial soils and silty clay loam. The wine is elegant and soft and my favorite of the three wines sampled. I found aromas of vanilla and cedar accenting the dark fruit. Displaying flavors of cherries and blueberries dominate the wine and delivers a smooth, bright, very well integrated Cabernet. As the wine opens up, it becomes silky. I also recommend aerating this Cabernet. 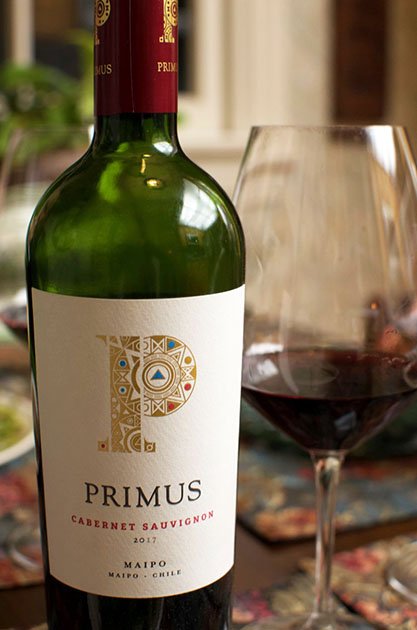 Primus Carménère Apalta – Colchagua Valley 2018: Often I find Carménère to me a harsher brooding wine. In this case, I was pleasantly surprised by this one because of its bright and lively attributes. I discovered one of the most balanced Carménères I have sipped. On the nose, find aromas of red fruits and cedar. On the palate, I found flavors of Cherry accented by black pepper on the finish. 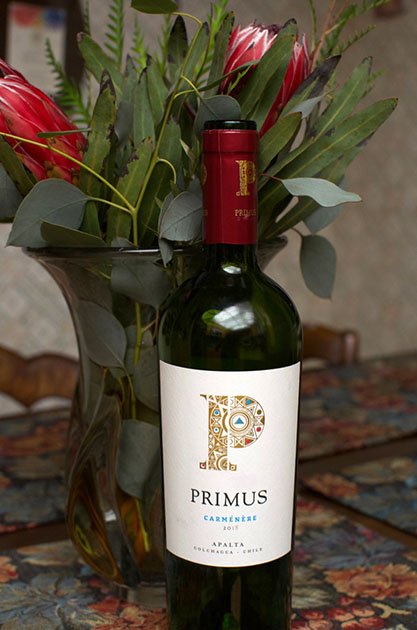 All in all, I felt all three wines were excellent, very drinkable, and well-priced for what they deliver.

Photo credit for the featured image goes to Viñedos Veramonte.