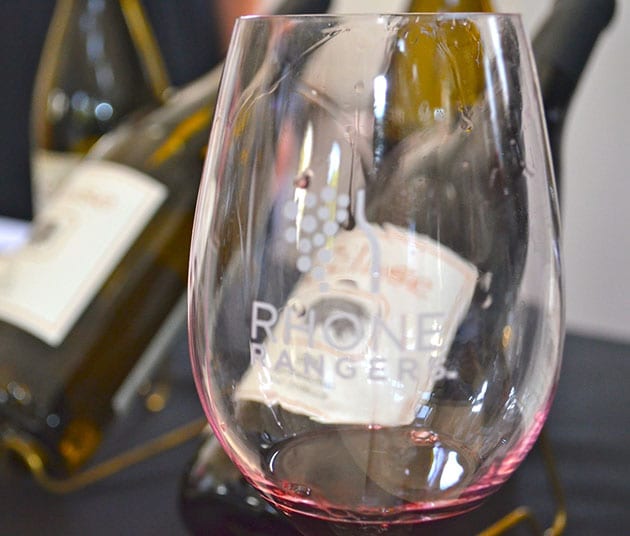 The Rhone Rangers wine tasting brings together wineries from all over California who pride themselves in creating Rhone varietals and blends from the 22 grape varieties known in France’s Rhone Valley. The majority of the wineries at this event were from the Central Coast, encompassing the regions of Santa Barbara Country, Paso Robles, and Monterey County.

The event, a popular one every year, was held at the Vibiana, Los Angeles. Originally known as the Cathedral of Saint Vibiana, this former cathedral was the parish of the Roman Catholic Archdiocese of Los Angeles. The majestic site, with its towering walls and ceilings, is a spacious venue for a wine tasting. My only complaint is the noise bounces off the ceiling, making it hard to hear and learn about many of the wines as the crowds increased.

Discovering the new gems in the wine business is always a delight when attending an event like Rhone Rangers. In addition, there were quite a few favorites worth a mention.

Beginning with Tercero, one cannot go wrong with the 2012 Mourvédre Rosé. This outstanding Rosé is one of winemaker/owner Larry Schaffer’s best and a definite hit at this event with its crisp balance qualities. Larry also featured an excellent 2008 Cuvee Christie, a light balanced blend of Grenache, Mourvédre, and Syrah. This blend consists primarily of Grenache and aged for 42 months.

Having just sampled several wonderful wines at Ecluse Winery in April I wanted to sample those wines that were not being served at the winery. It was well worth the stop at the Ecluse booth. The 2010 Prelude a white blend of 48% Viognier, 28% Roussanne, and 24% Grenache was delightful and refreshingly balance with a nice sweetness.

It was the reds that were truly impressive. The 2009 Grenache was a bigger wine with a fragrant nose of sweet currants. The currants permeated the wines flavor with a little bit of spice. The 2009 Rendition, a blend of Syrah, Grenache, and Zinfandel had a fruity zing on the finish. The 2010 Petite Syrah was a very rich velvety wine that definitely has holding power.

Petrichor is a new winery on the block and appears to have an amazing future. The winery is located just north of Santa Rosa above the Russian River Valley atop a ridge of the Mayacamas Mountains where owners Jim and Margaret Foley have planted Grenache and two clones of Syrah. Petrichor means the scent of rain on the dry earth. For the Foleys, it expresses the terroir of the volcanic soils against the elements of the climate, which change throughout the day.

Thus far, they have produced two vintages, the 2009 and 2010 Estate Les Trois. Both were excellent but preference went to 2009, as 2010 needs some more time to age in the bottle. Staying true to the Les Trois name, the wine is made up of three different plantings. There are the Grenache and two different clones of Syrah. The Syrah makes up 86%. The wine is rich in both color and flavor. The nose is very jammy giving, forth to wonderful hints of currants and licorice.

Caliza offered one of the most consistent bodies of wines. Starting with the outstanding bright 2012 Pink that exudes the aromas and tastes of raspberries and is truly exceptional Rosé. The white Rhone blends are exceptional, especially the crisp 2011 Kissin Cousins, a blend of Viognier, Grenache Blanc, and Roussanne.

The 2010 Azimuth, a red blend of 40% Mourvédre, 30% Syrah and 30% Grenache is very floral, and the palate senses the red berries that exude from this wine. The nose displayed strawberries and I found a well-balanced wine with a long finish and hints of raspberries. The 2010 Syrah I found rich and well balanced with cherry aroma and the perfect amount of spice. Caliza’s wines reflect the love of the winemaking process and the personality of winemaker/owner Carl Bowker.

Proulx was another outstanding winery. Kevin and Genoa Riley, whose first release was in 2005, own the winery. From the wines sampled, the wines are very drinkable and balanced. The 2012 Rose of Grenache was a blend of Zinfandel, Syrah, Cinsault, and Grenache Blanc. The 2011 Petite Sirah “Yellow Label” on the palate seemed very balanced with hints of pepper on the finish, making this reasonably priced wine an exceptional value at $18. Several of Proulx Rhone Blends include Zinfandel. The addition of Zinfandel adds a zing to the wine. This was true of Dimples, which is named for the Riley’s son and the 2011 Petite Sirah “Red Label”.

Andrew Murray Vineyard’s recently released the 2012 Viognier, a bright and expressive wine created in what Andrew calls “uncalifornicated because it is lean and mean”. This description describes the fact that this Viognier has no oak and no malolactic fermentation as it ages in stainless steel.

Other wines worth mentioning are The Refugio 2011 Viognier with its crisp, citrusy flavors. I found many of the wines from Carcareous excellent, including the very drinkable 2010 Syrah called Moose. This wine is the nickname of the winery owner’s father.

One could not miss out on a very special treat at the Rhone Rangers event. For those with a sweet tooth GG’s Gourmet Toffee is a must-try. The Macadamia Masterpiece combines white chocolate, coconut, and Macadamia nuts. It is truly delicious. These homemade toffees are made from a family recipe.

If you really like the Rhone varietals, a Rhone Rangers tasting event is a must.