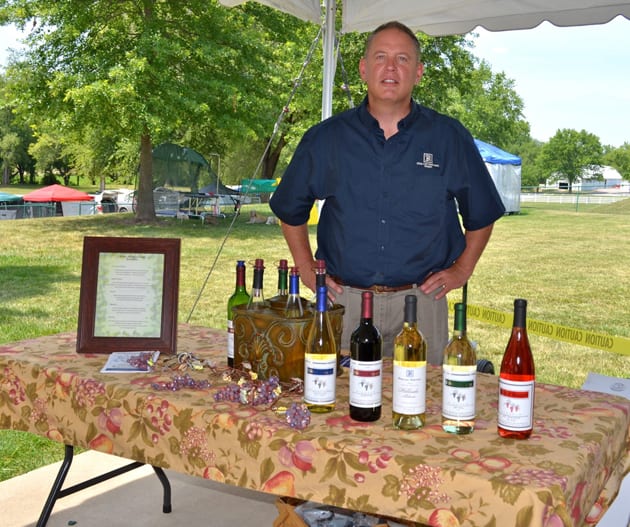 As summer approaches and wineries gear up for special outdoor entertainment to enhance the wine enthusiasts visit, I am reminded of my visit to Missouri Wine Country and Röbller Vineyard Winery on the Herman Wine Trail.   For those visiting the area, this winery combines traditional midwestern wine methods with a European approach with some nuances of California style. For the more sophisticated wine aficionado, this is an excellent union bringing complexity and structure to one’s palate and the wines of Röbller.

Röbller is located on picturesque rolling hills just south of the Missouri River in New Haven, fifteen miles east of Hermann. Robert and Lois Mueller own the winery. The Mueller’s son, Jerry currently plays an integral part of the winemaking process. This family-run winery was established in 1987, and its first vintage was in 1990. The Mueller’s choose the 85-acre property because of its south-facing slopes giving the vines an east/west exposure. The soil composition is such that there are 6-12 feet before reaching limestone. This composition permits the winery to utilize virtually no irrigation.

I have enjoyed the wines of Röbller over a two-year period as I have made several trips to Missouri. When I first met Jerry Mueller, I was not only impressed with his knowledge of wines but his dedication and passion for wine and winemaking. Jerry loves to share his wine knowledge and his enthusiasm for Röbller wines.

Jerry Mueller, who has taken over most of the winemaking and production, was an entrepreneurial in the fiber optics business in Texas until the 2000 tech bubble hit.  His background was business and science. He went into wine distribution, where he was able to refine his palate and traveled all over the world, discovering wines. His experience in distribution and tasting has helped define the approach Röbller now utilizes in their winemaking process.

Returning to the winery about four years ago, Jerry began integrating traditional European methods with a bit of a twist.  He would take the concepts and change the application. You might say it was thinking outside the box. To Jerry, winemaking is both an art and a science.

Some of the techniques utilized at Röbller are that the majority of the grapes, both whites and reds go through long-term cold soaking before they begin fermentation. In Missouri, it is atypical for the grapes to go through Malolactic fermentation, but at Röbller, they incorporate this process to create more body and texture in their wines.  Often there is a slowing of the fermentation process.

Röbller also practices some sustainable measures. As Jerry states, “ If there are no worms in the soil, there are no organic nutrients.”   Reusing the skins and stems in their compost puts nutrients back into the soil. They leave the mowed grass between the rows and use old horse manure as part of the compost.   Of utmost importance is protecting the land. Jerry insists, “ One of their jobs are to be good stewards of the land.”

Today the vineyard is planted with Vidal, Vignoles, Seyval, Traminette, Steuben, Villard Noir, St. Vincent, Chambourcin, and Norton. As part of their wine production, they are experimenting and have planted some vinifera; Petite Syrah, Cabernet Franc, Cabernet Sauvignon, Marsanne, Dolcetto, and Teroldego. With these varietals, Röbller hopes to create a unique style of wine, meshing the hybrids grapes with Vitis Vinifera to produce wines that are more in keeping with the palates of those on the east and west coasts.

Like Bordeaux wines, adding Merlot or Petit Verdot softens the tannins in Cabernet Sauvignon; these vinifera grapes will permeate the more austere or what I might call the masculine flavors of Chambourcin and Norton. The barrel sample I tasted of Norton with some Petit Sirah added appealed more to my California trained palate. The French varietals will be utilized with the Norton while the Italian will meld with the Chambourcin.

During my last visit, I barrel, and tank sampled several wines, including the Chambourcin and the Norton, which is enhanced with some Petite Syrah, making the wine earthy with light tannins yet assists in establishing fruitiness. The wine has a velvety and silky quality.

During my visit to Missouri wine country, I experienced these wines:

2012 Traminette – This wine is almost like a Gewurztraminer with its spicy, lemony floral flavors.

2009 Vidal – This wine has a creamy texture with a slight amount of sweetness.

2010 Hillside Blanc – This wine is a blend of Vidal, Vignoles, and Seyval and presents a creamy light buttery flavor. The wine’s characteristics incorporate the fruitiness of Vidal, the fruity German Riesling style of Vignoles, and the crisp combination of a Chenin Blanc, Sauvignon Blanc, or Pinot Grigio that is evident in Seyval. The wine has a tremendous amount of body that is due to the 95% malolactic fermentation and the lees stirring. The wine is well balanced with hints of stone fruit.

2011 St. Vincent Rosé – St. Vincent was the patron saint of wine, so it is appropriate to have a grape named after this saint. This Rosé with its gorgeous orange/pink color is very fruity wine hints of strawberry. It is a very delicate wine.

The 2009 Hillside Cuvee is a blend of Norton, Chambourcin and St Vincent. It is a lighter blend that goes suits any cuisine.

The 2009 Le Trompier Noir is Röbller’s answer to Pinot Noir. It is a blend of Chambourcin, St Vincent, and Villard Noir. The three ferment together and then 13 months in neutral barrels. The cherry flavors dominant the wine.

The 2009 Norton ages 24 -28 months chinkapin oak, which gives the wine toasty vanilla flavors. These barrels come from the state of Missouri.   Often the Norton is ferment in blocks with different yeasts.

While visiting Röbller, I was introduced to the most wonderful cheese from Martha & Tom’s Farms. Known also as M & T Farms, like the wines of Röbller, the cheese is handcrafted. Tom Blatchford, the owner, creates his Cool Cow Cheese from Jersey cows. They are artisan cheeses that you will not regret having tried.

Not only did I sample cheese, but I learned about what goes into making cheese. George Washington Vanderbilt brought the first Jersey cows to the United States from England because this breed of cow is considered to produce the highest quality milk. Making cheese from the superior milk only enriches the flavors. The type of cheese depends on the kind of grass the cow grazes on. This grass will also affect the color of the cheese as well as the flavor. A particular cheese can taste one way in spring and very different in autumn. This taste varies also varies with the types and condition of the grass.

Like Jerry Mueller, Tom’s love of cheese is quite apparent. Tom says his Jersey cows dictate what cheese to create at a particular time to sell on his farm in Owensville. He uses Danish cultures rather than American cultures to create his cheese.

We began our exploration into the Jersey cow cheese with a Havarti. This cheese was a nutty, creamy cheese. As Tom states, “It is a happy cheese.”

The Jersey Camembert is considered a winter cheese and Tom has a waiting list for this one; upon tasting this cheese, you will know why.

The Danish Gouda was another yummy cheese and a favorite of mine with its buttery sweet flavors. We also sampled the American Gouda with red peppers.

If you are looking for an excellent spreading type cheese, M & T’s Queso Blanco is a winner. This cheese is in the Quark family and is a great cheese for grilling.

We finished off with a Gouda with some of Röbller’s Norton integrated into the cheese. It was another marvelously buttery cheese. The wine added a very subtle flavor to this cheese.

M & T Farms also have a bed and breakfast called the Brinkman Farmstead, a post and beam barn featuring an interactive dairy on the first floor and guest suites in the hayloft. This B & B is an ideal place to stay when you visit both Röbller Winery and discovering the Farmstead Artisan Cool Cow Cheese.

The wines of Röbller Vineyard Winery are exemplary examples of the quality of wine that can be produced in Missouri wine country. M & T Farms is the utmost in the artisan craft of making cheese. Blending the two is a perfect way to enjoy a day in the Missouri countryside.