You might say it was a spur of the moment trip when the opportunity came to visit San Luis Obispo for the Roll Out the Barrels wine tasting event, I could not turn it done as it gave me a new insight into the wines of San Luis Obispo County. Having visited the area many times over the last twenty-five years, this was the first time I got to discover many of the wineries that make this area so special.

Currently, twenty-eight wineries are part of SLOWine Country. The region is composed of two AVAs, The Edna Valley AVA, which was established in 1983, and the Arroyo Grande Valley AVA that earned its designation in 1989. Surrounded by what is known as the seven sisters, volcanic peaks with Morro Rock being the most famous.  These mountains containing the remains of harden lava plays an important role in the growing of the grapes.

In Edna Valley, the soils are a combination of limestone, clay, and sandstone. In Arroyo Grande, the soils are both sedimentary and volcanic. With cool maritime breezes coming in, the morning fog and the diurnal swings in temperatures make this an ideal area for cool-climate grapes. There are about 20 grape varietals grown in the area with Chardonnay, Pinot Noir, and Syrah being the most popular. 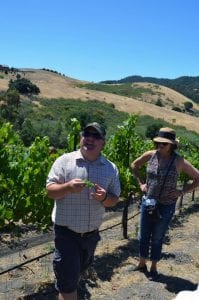 Traveling with three other journalists from LA Wine Writers our visit began with a hike and wine tasting with Mike Sinor of Sinor-La Vallee Winery called “Dynamic Vineyard Tour”. Mike’s philosophy on making wine is one that incorporates the spirit of biodynamic and organic farming with his own take on what these principles mean to him.  Walking with Mike through his Bassi Vineyards, located 1.2 miles from the coast, one immediately senses Mike’s passion for the wines he creates as well as what his wines are about.

Bassi Vineyards is made up of 112 acres of which about 30 are planted with vines. The varietals planted are Albarino, Chardonnay, Pinot Grigio, Pinot Noir, and Syrah.

Adapting those biodynamic principles that he feels work for him, Mike says,“ The greatest fertilizer that is put into the ground is man’s footsteps.” We imprint what we want into the soil. The outcome of this theory is what we find in each glass of wine.

Mike has a wine tasting room in Avila Beach. My favorites were the SLO County Pinot Noir Vin Gris with its bright fresh flavors, SLO County Syrah and Syrah Black Label Bassi Vineyards, which is reminiscent of blackberry pie.

Our next stop was taking a tour of the town of San Luis Obispo. This is a college-oriented town. Cal Poly’s influence is present throughout the area. Walking down Higuera, the main street in San Luis Obispo, one has to make a stop at Bubble Gum Alley. Think a Jackson Pollack painting meets bubble gum. The town straddles the San Luis Obispo Creek. Restaurant patios overlook this creek. It a fun place to be on a summer night. 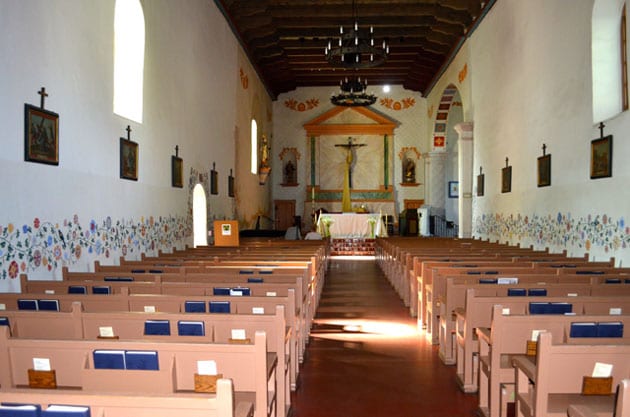 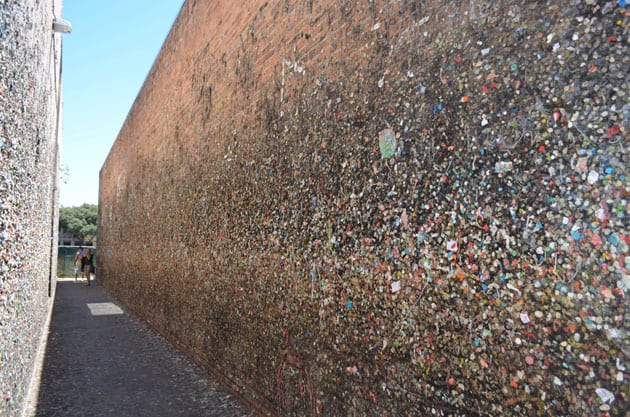 One of the older hotels dating back to 1922 is the newly updated Granada Hotel & Bistro. Our visit combined an art experience with the Spanish themed appetizers from the hotel’s bistro with wines from Center of Effort. Joining us was winemaker, Nathan Carlson also participated in the painting. It was a lively experience and certainly having the wines from the Center of Effort made us more creative at least in spirit. 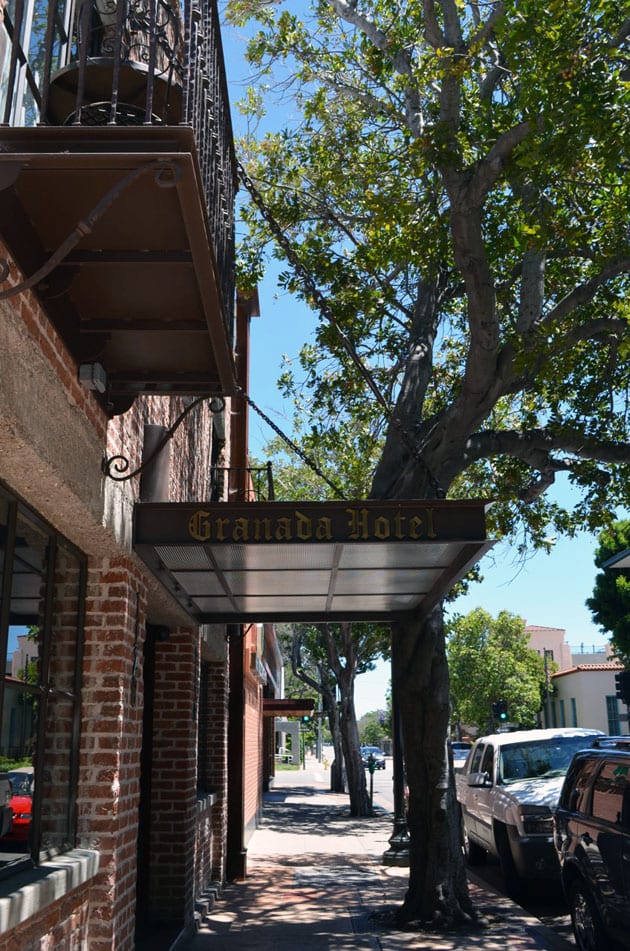 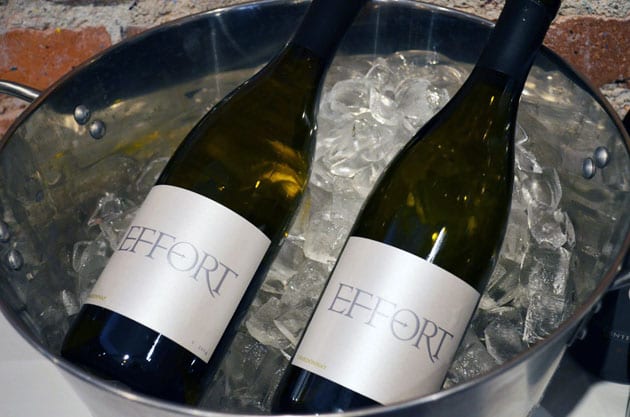 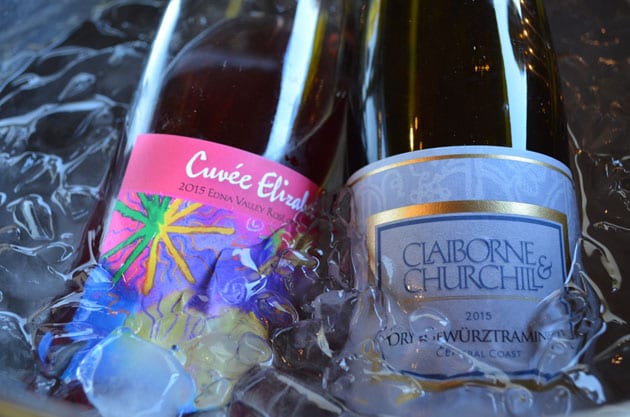 It was a fun evening under the stars. I walked away looking forward to my tasting at Stephen Ross the next day, wanting to sample more of the wines of Peloton Cellars and yearning to come back to Claiborne & Churchill to purchase a bottle of their elegantly subtle Gewürztraminer. The food and wine meet all of our expectations for a marvelous evening. 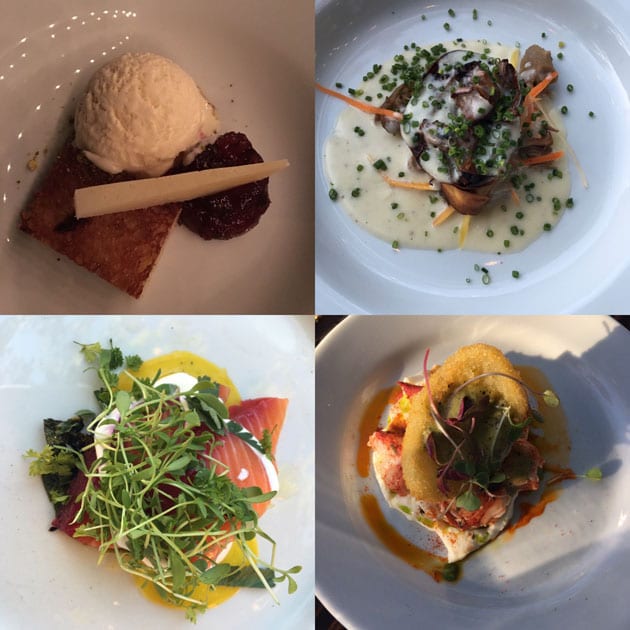 The Cuisine at Toast the Coast

The next day took us to Filipponi Ranch for a hike and BBQ lunch with wine tasting. The Filipponi Ranch Winery is a 300-acre property that was purchased in the early 1900s by Lorenzo Filipponi, who emigrated from Switzerland. Situated amongst oak trees, the ranch began as a dairy farm.   The winery’s label is a quick reminder of Lorenzo’s roots and background because it utilizes the family’s branding symbol for their cows. The bell shape represents the bells that adorned the cows in the Swiss village of Gordevio where the family came from. The cross represents the Swiss flag representing where the family’s heritage began.

Winemaker, Peter Cron, led the hike. As we climbed the trail we were afforded the most spectacular views of the Edna Valley and San Luis Obispo. While the sun was blistering down on us we stopped in the shade to refresh with some Chardonnay and Rosé, my favorite was the Rosé.   Very much in the French style, this Rosé was very fragrant. Rose floral dominated while the flavors of strawberries were very apparent.

The winery is housed in an old dairy barn. Peter Cron says that its prior use does have an effect on the wine.

During our BBQ my favorite wine was the Tempranillo. The grapes come from Lodi and the wine ages in American Oak. 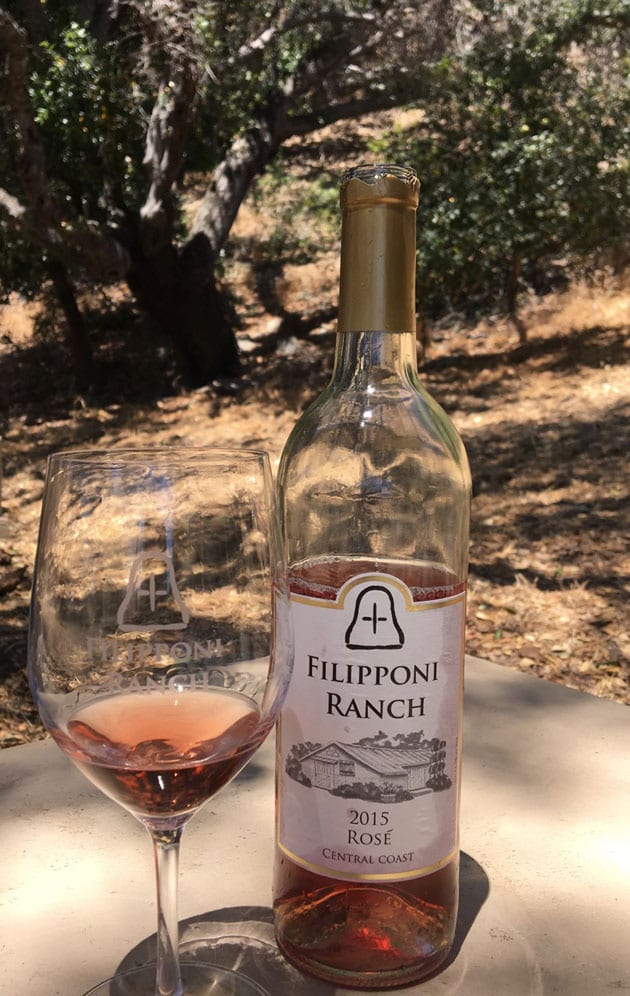 Moving on, our day took us for “Tapas at Two” at the Stephen Ross Wine Cellars. Located in an industrial center, Stephen came to Edna Valley in 1987. He started his winery in 1994 and opened his tasting room in 2008. Growing up in Minnesota, Stephen always had a fascination with wine. In his teens, he would make fruit wine in the basement of his home. Stephan Ross wines are founded on elegance.

Besides his exceptional Pinot Noir that comes from his estate vineyard, Stone Corral Vineyard that was planted in 2001, Stephen Ross has a wonderful Albarino that exudes flavors of stone fruit and florals. Stephen’s second label consists of more affordable wines. Named after a small airport in Minnesota near where Stephan grew up. The Sauvignon Blanc is a very bright fresh wine that exudes a delicate balance and perfect minerality. 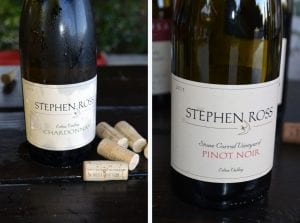 The day ended with a pasta and pizza dinner at the newly opened Flour House on Higuera. At the time they were still working out some of the kinks but heresy has it that it is a hit in downtown San Luis Obispo.

My visit included a stay at the Lexington Inn. This is a very comfortable hotel just north and within walking distance to downtown San Luis Obispo.

Visiting the Roll Out The Barrels event really opened my eyes to the great wine that is produced in the SLOWine region. The area certainly draws me to want to return to sample more of what they have to offer.

If you would like to discover SLOWines and have a hankering for a weekend getaway, Harvest on the Coast, a wine tasting and food event are coming up at the Avila Beach Resort. Beginning November 4 – 6, 2016 it is capped with the Grand Tasting on November 5th. The weekend is kicked off with the “Crafted on the Coast” Collaborative Winemaker Dinner on Friday, November 4 at Ocean Grill Restaurant. Sunday features a “Go Coastal” Wine Tasting Open House. For more information visit SLOCOASTWine.