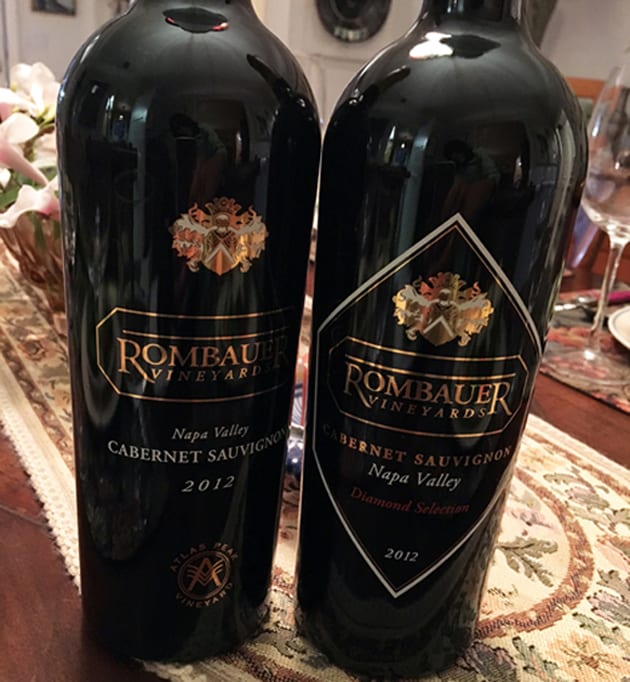 For many in the Napa wine industry, life began in the 1970s. You had the Judgment of Paris, which essentially put Napa Valley on the map from the world’s perspective, but at the same time, you had many lesser-known pioneers who were forging their way to make their statement in wine. One family that moved into the area was Koerner and Joan Rombauer. Relocating to St. Helena in 1972 and by 1976, they became partners in Conn Creek Winery. It was in 1980 after determining he was adept in running a winery, Koerner decided to sell his interest in the winery he helped establish and start his own winery using his 40-acre parcel to develop what is now known as Rombauer Vineyards.

Winemaker Richie Allen is at the helm overseeing both viticulture and winemaking. Graduating with a degree in molecular biology, followed by studying enology at the University of Adelaide and getting most of his practical experience in Australia and New Zealand, Richie started as an intern in 2004 at Rombauer. By 2005 this Australian native became Assistant Winemaker and in 2008, moved up the ladder to winemaker.

Over the years, Rombauer was most known for the Chardonnays, but they produce other wines and are focusing on elevating their red wine program. Besides, Chardonnay Rombauer produces Cabernet Sauvignon, Merlot, Zinfandel, a Bordeaux Blend called Le Meilleur du Chai, which means the best of the cellar and three dessert wines. New to the line up is Sauvignon Blanc, which was introduced in 2014.

The Rombauer Sauvignon Blanc represents the first new varietal introduced to the winery in 20 years, and the only other white varietal the winery has created in their 35 plus year history.

The Sauvignon Blanc, in its second year of production, comes from vineyards in Napa Valley. The grapes are hand-picked and whole-cluster pressed. Ninety percent of the juice ferments in stainless steel while the remaining ten percent, ferments in neutral French Oak. After three months of aging, the two are blended together.

The wine has aromas of fresh banana and some notes of white flowers.   Although there are some citrus flavors, one also finds tropical flavors of pineapple and banana along with pear and stone fruit. The wine exhibits marvelous sweet flavors not typically associated with Sauvignon Blanc, which sets this Sauvignon Blanc apart, making an extraordinary wine from those typical of the varietal.

Although Cabernet Sauvignon was the first wine created when the winery was founded in 1980, sampling four different Cabernet Sauvignons today shows that Rombauer Vineyards goal of perfecting their red wine program is a success and is an elegant tribute to this varietal.

The Diamond Selection Cabernet Sauvignon was first produced in 1994 and signifies the best lots of each season. In the case of 2012, the best lots were from Stags Leap, Calistoga, Atlas Peak, St. Helena, and Howell Mountain AVAs. The wine ages 18 months in new French Oak. The wine has aromas of mocha, dark fruit, tobacco, dried herbs, and vanilla. The flavors of this well-balanced and bright wine are predominately plum with some blackberry and currant. As a friend described, “it is plum delicious.”

Stice Lane Vineyard is located in St. Helena. The first vintage from this site was in 2004. The vineyard was a former riverbed, and gravel deposits characterize the soils.   The 2012 Stice Lane Vineyard Cabernet Sauvignon represents a single vineyard wine produced explicitly from one particular block. This wine ages for 18 months in new French Oak. The wine has aromas of tobacco, leather, mocha, and dark fruit. On the palate, one finds cherry, stewed fruit and plum. This full-bodied wine is velvety with complex textures and hints of vanilla on the finish.

Finally, finishing off with the 2012 Atlas Peak Vineyard Cabernet Sauvignon, the wine also ages 18 months in new French Oak. Rombauer first produced a single vineyard wine from this area in 2003. The site is rugged and above the fog line, making the climate cooler than the valley floor. The soil is volcanic and rocky, causing the vines to produce smaller berries. The wine has aromas and flavors of mocha, tobacco, and dark cherry with an underlying spice.

For most of us, the “joy of wine is sharing with family and friends,” and one will certainly enjoy sharing the Rombauer Vineyards wines, especially the Cabernet Sauvignons as they speak specifically to the Rombauer’s family legacy and the traditions of Napa.