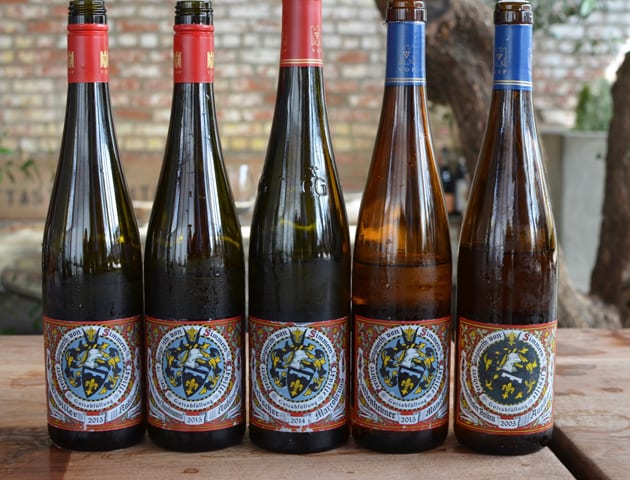 As spring moves into summer, it is time to consider the enjoyment of Rosé and a variety of white wines. I recently had the opportunity to sample some of the Rosés, Rieslings, and Ramato offered by Chambers & Chambers. Here are some of my favorites that you might want to put on your list for summertime wine.

By far, my favorite Rosé of the entire event was the Bokisch Vineyards 2016 Rosado Terra Alta Vineyard. Having recently sampled some of this winery’s Spanish red wines influenced by the owner’s love of Spain, it goes without saying I would be equally impressed with their Rosé made from Grenache. The wine is bright with nice acidity. The wine is refreshingly strawberry in flavors.

Quivira 2016 Dry Creek Valley Rosé is a blend of Grenache, Syrah, and Counoise. You could smell the wonderful Provence aromas in this wine. The florals were roses that you could both smell and taste. This wine exhibits a very balanced Rosé with flavors of strawberry and watermelon.

From Spain, the 2016 Armas de Guerra Bierzo Mencia Rosado was excellent. Vinos Guerra is the oldest winery in the Bierzo. The grapes in this Rosado come from some of the oldest vines, 50 plus years in the Castilla y León region. The Mencia grapes are organically dry-farmed. The wine is refreshing and balanced with flavors of apricot.

I also recently discovered the Elena Watch Winery in the Alto Adige region of Italy. They are known for producing wines from the indigenous Lagrein grape. Their 2016 Vigneti Dell Dolomiti Rosé combines Lagrein with Merlot and Pinot Nero. The wine is bright and savory.

Ramato is sometimes called the Rosé of Pinot Grigio. What gives the wine its copper color is the fact that many winemakers macerate the juice in the skins. Most Ramato comes from the Friuli region of Italy. Valter Scarbolo, a family-owned winery, 2014 Friuli Grave Pinot Grigio Ramato was my favorite. This wine had complexity and viscosity because the wine sees some oak.

Weingut Dr. Crusius was started in the 1950s in the Traisen region of Germany.

Weingut Dr. Crusius Schloss Bocketheimer Feisenberg Riesling Grosse Gewach 2014 offered nice spice. The wine was subtler than some of the other dry Rieslings sampled. The wine sees some neutral oak.

Werner & Sohn is one of the oldest winegrowing estates in the Mosel, dating back to 1650.

Werner 2013 Trittenheimer Apotheke Riesling Spatlese, although sweeter, was a nice and balanced wine.

Weingut Langwerth Von Simmern is the oldest family-run winery in the world.  Their presence in the Rheingau dates back to 1464.

Tasting all these summery wines made me wish the summer was already here.

Note: Common to the wine industry, this writer enjoyed a hosted tasting. While it has not influenced this review, the writer believes in full disclosure.