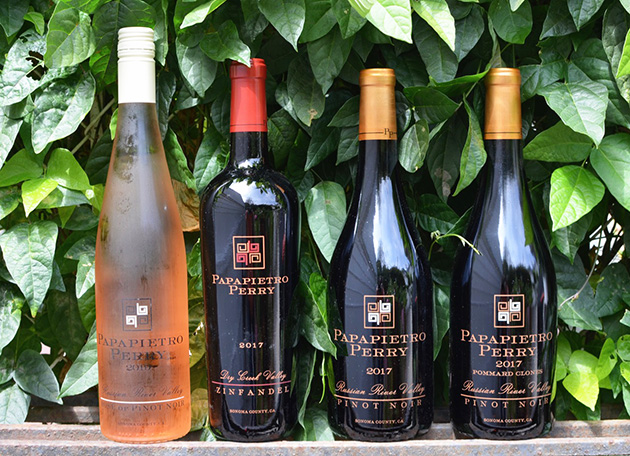 Steering his way to Sonoma County, Ben Papapietro, along with his partner Bruce Perry traversed the roads on a journey from the family garage to their winery in Dry Creek Valley. Along the way, Ben maneuvered his way via a truck working for the San Francisco News Agency; the San Francisco Examiner and Chronicle. No matter what form of transportation or navigation device, Ben used, all roads led him to his true passion and love, wine, especially Russian River Pinot Noir and discovered at his Papapietro Perry Winery.

Growing up in San Francisco in an Italian family meant, food and wine was a part of the daily meal. Ben’s grandparents made wine during Prohibition and the Great Depression. Ben was fascinated watching his grandfather make wine, and those were his first lessons in winemaking.

Living in San Francisco and being a truck driver made it easy to discover the wines of Napa and Sonoma, but the wines that captured his heart were Burgundies. Ben, like his grandfather, started making wine in his garage in 1980. Bruce came into the picture in 1985. The two decided to work a harvest at a real winery as a way to expand their knowledge of wine. A co-worker and friend, Burt Williams, at the agency, had already started his winery Williams Selyem and became their mentor. That year they worked harvest for Burt.

Ben’s garage was his lab as he and Bruce experimented with different varieties, but their favorite, Pinot Noir, always won their hearts. Soon they outgrew their garage, making 400 cases a year, and it was time to expand. Their first wine facility was in Winsor. In 2005 they moved to Dry Creek Valley at their current location in an authentic fruit processing barn at the Timber Crest Farms Collective. Ben describes their winery today as an elaborate version of their original winery digs.

Not only was Ben a truck driver, but he was also head of the teamsters union. You might ask how this relates to wine. Actually, it does because Ben negotiated a better union contract for his peers. In winemaking, you need to negotiate for the purchase of grapes. Unlike his union contract, Ben laughs at the fact that his experience allowed him to buy grapes on a handshake.

As a winemaker, Ben utilizes a minimalist approach that embodies the criteria of letting the vineyard speak through the wine. For Ben, the authenticity of the wine says it all. Through consistency in winemaking practices, Ben achieves his goal. All grapes are cold-soaked for two to four days before fermentation. The Pinot Noir ages between 11 and 12 months and the Zinfandel ages from 12 to 17 months. The yeast and barrel type is always the same. Each clone is fermented and aged separately.

Consistency carries into the workplace, something Ben learned as head of the teamsters because you get better performance if you treat everyone right. The winery team is essentially a big family.

The Papapietro Perry logo has a story. Both Ben and Bruce had worked with someone whose daughter, Christine, was looking for a project for her graphic arts degree. Ben suggested she attempt to design a wine label for their winery. The design represents four P’s in Papapietro Perry’s name seen backward and upside down. Christine got her degree, and we purchased the label. The rest is history, as this label also became their logo.

Ben tells the story of how his Rosé came to fruition. It occurred when he purchased new equipment. His original conveyor belt had a downward incline. The new machinery was the opposite, it elevates upward, forcing the juice to flow backward.  This change caused a lot of juice to go to waste.

Observing this phenomenon, Ben remembering a saying his mother used to say, “waste not, want not,” decided to collect the juice from all the Russian River Valley Pinot Noir. Today he uses this juice for his Rosé. This process is Papapietro Perry’s form of Saignée because it bleeds the juice off the red juice. The result is a layered, elegant wine because it utilizes the various clones.

The Rosé is bright with nice acidity and balance. The wine ferments and shortly ages in used oak. On the nose, I found aromas of melon, while on the palate, flavors of melon and lighter fruit prevail.

I first met Ben and discovered some of his wine at World of Pinot Noir. At that event, the Peters Vineyard Russian River Valley Pinot Noir spoke to me. I found a bright and pretty, very drinkable Pinot Noir.

At the time, I also sampled the Sonoma Coast Pinot Noir. This Pinot seems bigger and perhaps bolder compared to the Peters Vineyard.

During a virtual tasting with Ben, I sampled the following Pinot Noir.

First, we sampled the AVA wine, which combines 114, 115, and 777 from several vineyards in the Russian River Valley. I found a bright wine with flavors of strawberry accented by earthy spices. Although this wine defines Ben and his winemaking, it is what he calls the beginning of the line. Everything goes upward from this wine.

The Pommard Clones Russian River Valley Pinot Noir emphasizes the Pommard clone but as a blend. Ben describes the Pommard as the workhorse of the Russian River Valley, “the iron fist and the velvet glove.” This wine exhibits more complexity. Although bigger in stature, it still showcases the elegance and feminine side of Pinot Noir that is evident in all of Papapietro wines.
Ben finds this wine seductive with its flavors of pomegranate and cola.

Since the winery tasting room is located in Dry Creek Valley, which is known for its Zinfandel, I had to sample one from Papapietro. Like the Pinot Noirs, the Zinfandel is elegant, a quality I prefer in Zinfandel as opposed to the harsher and hotter quality with the overabundance of pepper so often found in the area. Ben describes this wine as a Claret style Zinfandel. The wine exudes flavors of dark fruits with a mild hint of pepper.