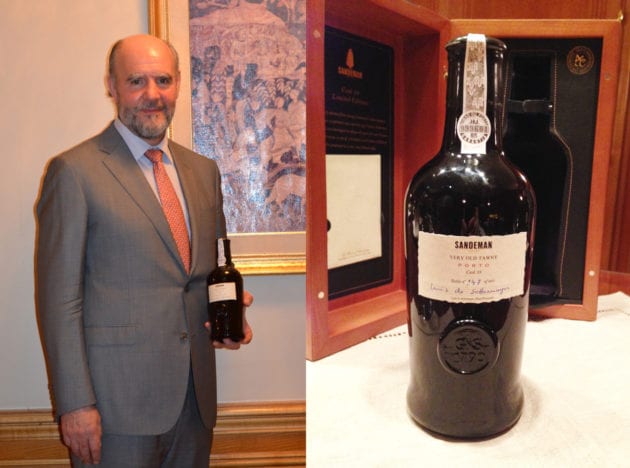 It is a very special year for Sandeman. This year celebrates the 225th anniversary of this company’s existence. The company has released a very distinctive one-of-a-kind Tawny Porto known as Cask 33 in honor of this anniversary.

One finds a single-cask limited edition Tawny Porto featuring wines of up to 70 years. The cask represents what Sandeman is all about. The Tawny Porto represents not only a celebration of Sandeman’s 225 years but also the generations of Master Blenders who crafted the wine in this cask.

The House of Sandeman was established in 1790 in London by George Sandeman, a Scotsman from Perth.   In the beginning, he was a wine merchant specializing in Porto and Sherry. In 1805 Sandeman was the first to brand a barrel with his name, signifying the quality and origin of the wine. Later Sanderman was one of the first to ship bottled wines. The history of Sandeman includes being one of the oldest companies to register a trademark in the world. Since the onset, Sandeman moved its headquarters from London to Oporto, which is the region most known for Porto along the Douro River.

In celebration of 225 years, Sanderman has uniquely packaged this incredible Tawny Porto. They recreated the bottle used in the 1790s. Each bottle is hand-blown with the initials “G.S.”   Not only does this bottle pay homage to the foundation of the Sandeman Company but also the bottle is numbered and signed by winemaker Luis Sottomayor. The bottle makes a wonderful keepsake for any Port lover. There are only 685 bottles produced, and only 250 brought to the United States.

The 50-year-old blend was originally laid down in 1963. It combines the more vibrant 30 and 40-year-olds with the elegantly rich and more complex Tawnies of 60 and 70 years ago. This Tawny Port is the first time Sandeman has decided to bottle only one pipe, giving the Porto its own special distinction, which seems perfect for this anniversary.

The wine celebrates not only the anniversary of Sandeman’s establishment in the world of wines but also the generations of winemakers who made Tawny Porto become a reality, as well as the seven generations of the Sandeman family that have brought the company to where it is today.

It was a very special treat to be able to sample this very old Tawny Porto. The Porto aged in 40 Oak Pipes created by Sandeman’s coopers in the 1940s. The Tawny Port, with its gorgeous amber hues, is elegant, balanced and displays the harmony of all the combined years of aging, making it very vibrant. The aromas were that of Cedarwood, black pepper, and leather. I also found sweet aromas. It is rich complex with a sweetness that is reminiscent of Cognac.   The flavors were apricots and currants, and there was a crisp acidity.

If you are looking for something uniquely exceptional to add to your wine cellar or want to give a very extraordinary gift to someone, Cask 33 Limited Edition would be perfect.

Note: Common to the wine industry, this writer received a hosted sample.  While it has not influenced this review, the writer believes in full disclosure.