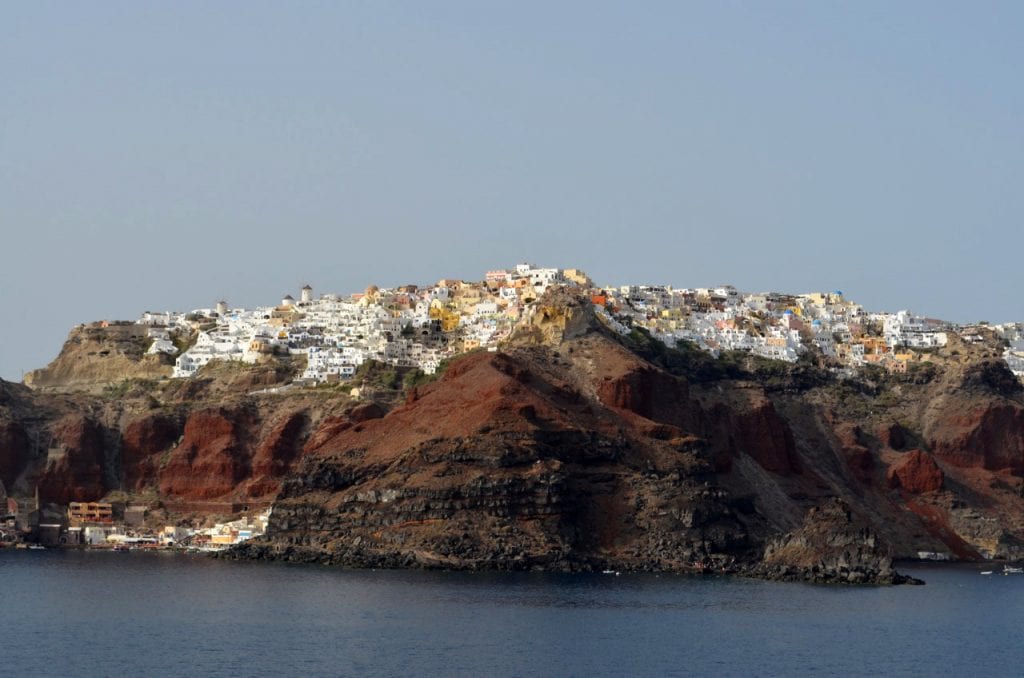 Vineyard practices are fundamental to the process of making wine and also the outcome of what we ultimately decide to drink. Across the world, these methods vary because of soil conditions and climate. One of the most unusual vineyard practices I discovered while visiting Santorini, Greece.

Santorini sits perched high above the sea, approximately 900 feet. Access to the island is by ship, and a cable car rides up to the top of the island cliff. The architecture, whitewashed cubical structures give the island a spotless modern appearance. In a way, it reminds me of the adobe homes one finds on a Pueblo in New Mexico. The only difference is the sandstone hues with brown accents versus Santorini’s crisp white facades often decorated in blue trim, especially the domed roofs.

Santorini is one of the Cyclades Islands located in the Aegean Sea. Its crescent-shaped formed by a volcano known as the Minoan Eruption that erupted over 3600 years ago. Following the volcanic eruption, a Caldera formed, which today becomes part of the beauty one observes while visiting Santorini.

Before discussing Santorini as a wine region, one must understand Greece has over 300 grape varietals, and the majority of these varieties are indigenous to the country. Greek wine comes from twenty-three regions, with Santorini being one of them.

Santorini’s climate is Mediterranean with extremely gusty winds. If the grapevines utilized the typical vine training systems of growing in rows on trellis used in the United States, there would be a tremendous loss of grapes due to the winds. The canopy would be left unprotected. Instead, the grapes grow in an unusual way. The vines are trained to grow low to the ground. Unstaked, the vines create a wreath-like basket shape, also known as a giristi. This shape protects the grapes from both the winds and the sun. As the vines grow, they are woven into a basket with the grapes facing inside towards the basket’s center. The leaves cover the grapes protecting them from the sun. This bush training method of growing grapes is called Koulara and prevents burning. Since the region never suffered from phylloxera, the vines remain self-rooted.

Because the soils are composed of volcanic ash and rocks, it gives Santorini wines nice acidity. Santorini is one of several wine regions explicitly known for its volcanic wines. The vineyards are dry-farmed. The flagship grape of Santorini is Assyrtiko, an indigenous white grape. The following indigenous grapes, Athiri and Aidani in the whites and Mandaleria and Mavrotragano in the reds, also grow on the island.

The PDO, Protected Designation of Origin Santorini designation was established in 1971. The wine must contain at least 75% Assyrtiko to be considered a PDO Wine and often combines Athiri and/or Aidani with the Assyrtiko.

Nykteri is another form of a PDO wine utilizing at least 75% Assyrtiko. Typically, either Athiri and/or Aidani are added as additional elements to the wine. Although similar to Assyrtiko, Nykteri, which means “the night,” is harvested at night before sunrise to avoid the heat. Pressing of the grapes also occurs at night. Essentially Nykteri is the wine of the night because it is created at night. While the wine vinifies in steel or Oak, it ages a minimum of three months in Oak.

Vinsanto, a PDO sweet wine, is created from sundried grapes. The wine reminds me of an Italian Passito. Vinsanto consists mostly of Assyrtiko at least 51%, with the remainder being Athiri and Aidani. Vinsanto is an amber-colored wine that has flavors of apricots and honey. The wine must age a minimum of 24 months.

A visit to Santorini includes some of the most spectacular views, and going wine tasting on the island involves sipping wine and enjoying the panoramic views. The atmosphere is relaxed, and when I sat sipping wine, I was enamored by the beauty and serenity of the ocean around me. It is breathtaking and something not to be missed when visiting the island.

Established in 1947 as a cooperative, Santo Wines is the largest winery and producer of wine on Santorini. In 1992 the current gravity flow state-of-the-art winery was constructed. Nikos Varvigoros, Santo’s chief Oenologist, although very soft-spoken, is exceptionally passionate about the wines he creates.

Wine to discover at Santo Wines

Sparkling Santo Brut: A traditional method sparkling wine from Assyrtiko displays aromas and flavors of citrus and peach with a light tropical flare.

Santorini Assyrtiko Grande Reserve: Grapes come from a 100-year old vineyard and are harvested late in the season. The wine ages 12 months in oak barrels, followed by an additional 12 months in the bottle. The wine exhibits aromas and flavors of brioche, pear, caramel, and honey.

Kamenh: The grapes, 100% Mandilaria, are sun-dried for several days before vinification and aged 24 months in oak barrels. I found the texture and structure bigger than many other Greek reds with aroma and flavors reminiscent of a Bordeaux wine.

Vinsanto Santorini: This dessert wine ages 36 months in neutral Oak. The wine reveals aromas of brandy, dried apricots, caramel, and anise, on the nose. On the palate, discover flavors of prune, raisin, and anise.

This winery only specializes primarily in wines from the Assyrtiko grape. Winemaker Yiannis Tselepos joined forces with the Chryssou family to create Canava Chrissou. Yiannis is known for his wines in Mantinia and Nemea but with this venture spread his wings to Santorini.

Wine to discover at Canava Chrissou

Laoudia: Laoudia means the holes where wild hares nest and my favorite wine from this winery. Perhaps these nesting holes can be found in the single 100-year old vineyard that provides the Assyrtiko grapes for this wine. The grapes are over-ripened when harvested. The fermentation and aging occur in amphorae. After aging for eight months on the lees, the wine then matures another ten months in the bottle. All these factors make this Assyrtiko unique. Atypical for Assyrtiko is the depth I found in this wine. I thought the wine aged in Oak. The wine delivers citrus flavors and bright acidity.

Constructed in 1947, Venetsanos appears to be the oldest winery on Santorini. It also represents the first industrial winery on the island. I loved wandering through the corridors and tunnels of this old winery. It resembled a museum with displays of old winery equipment. A pipeline led from the winery and traversed to the sea in days gone by, allowing the wine to be pumped and loaded directly onto ships. The winery’s construction into the cliff created a natural gravity flow.

Since my initial visit, the winery has a new winemaker, Christos Kanellakopoulos, who infuses new life into the winery and wine production.

Wine to discover at Venetsanos

Anagallis Rosé: Featuring aromas and flavors of strawberry and cherry, this Rosé blends Mandilaria with Assyrtiko and Aidani.

Mandilaria: With flavors of blueberries and cranberries, this grape is considered difficult to grown and often is harvested later. The grapes are first dried in the sun for one day. After vinification, the wine ages for three years, a portion in oak barrels and the rest in stainless steel.

Liastos: This unique wine uses the Mandilaria grape to create a Vinsanto. Venesantos calls this wine First Bottling. The grapes are dried in the sun for 5 -12 days. Liastos delivers aromas of molasses, dried prunes, and figs. I found a full-bodied, rich wine displaying flavors of molasses and berries.

Although I did not have a chance to visit other wineries, I recommend visiting Argyros, Art Space, Boutari, Gaia, and Sigalas.

Note: Common to the travel and wine industry, this writer was hosted to her visit and the wine tastings. While it has not influenced this review, the writer believes in full disclosure.