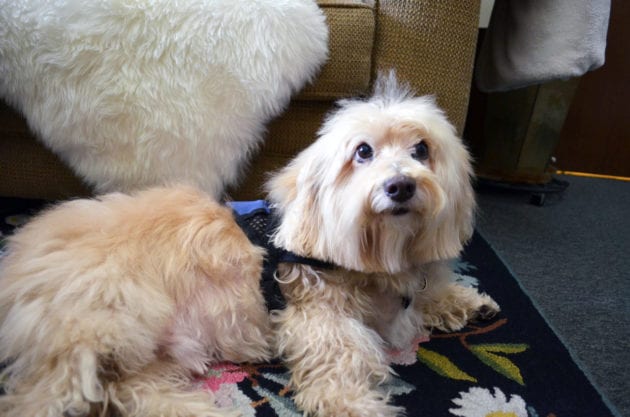 For many, dogs play a significant role in our lives, but for others, these dogs help them stay grounded. Some dogs have the gift of helping people. For Colleen Perry, the gift was her shelter dog, Murray, who helped her therapy patients.

Colleen, a Marriage Family Therapist, MFT, adopted Murray when he was about two years old. The adoption occurred about a year after Colleen lost her dog, Lucy. Murray was a shy shelter dog that Colleen’s partner Bob discovered sitting alone in the back of a cage at the pound. Colleen and Murray bonded immediately. Little did Colleen know that this dog would not only be the love of her life but would result in many successful therapy sessions with her patients.

It all began when Colleen discovered that Murray loved to go for rides in her car. She would take him everywhere, so she figured why not to my office. After getting permission from building management, Colleen started to bring Murray with her to work.

Colleen works with people who have chronic pain, eating disorders, relationship problems, teenagers and Post Traumatic Stress Disorder (PTSD). All these patients not only visit with Colleen but they experience the presence of Murray. Murray even gets some canine patients to see too. Many of Colleen’s patients bring their dogs.

Murray can sense the energy of a person. Anyone who is crying or upset he goes over to comfort them. He knows when someone needs comforting. Murray will sit on the floor and sidle up to your leg. He gently nudges at your leg. It is very reassuring to feel his furry body touch up against yours. Murray will not jump up on the couch unless he is prompted.

Many of Colleen’s patients begin to feel at ease when they walk into her office and see the dog, especially teenagers or the combat soldiers Colleen works assists. Not only does Murray work well with the patients he also keeps Colleen grounded.

One might ask, how a patient feels grounded around Murray? Basically, it is the tactile stimuli of petting Murray as well as his warmth that brings people around. Sometimes it is just Murray’s presence in the room. Often the patient first connects with Murray by sitting down on the floor and playing with him before starting the therapy session.

One patient who we will call Laura said, “Little Murray has been a friend of mine for five years now. He has helped me get through some of the most difficult times, as he sat next to me in Colleen’s office. Animals have taught me more than most humans, in their ability to love and forgive as well as to live with compassion to myself and others. Murray is the sweet face of healing, and I thank him for teaching me so much. “

It is the unconditional love that Murray gives to Colleen’s patients that helps them open up to resolve their problems or work on their issues.

Another patient named Patricia states, “I look forward to seeing Murray at every appointment because he is very special to me. When I come into the room, he comes up on the couch so I can pet him. It’s like he is letting me know that I am loved, and I feel special. I always feel safe with Murray, and I don’t feel this way with people. He seems to have a way of knowing when I am upset. Whenever he senses this, he comes over to me and puts his head against my leg, or hops up in the couch which always makes me feel better.”

Another example of how Murray assists occurred with a teenager, who was autistic. Colleen used Murray to teach this person how to relate to humans as well as develop social skills.

One of Murray’s success stories occurred when a long-term trauma patient felt very unsafe during a session. The patient was fading away, meaning their mind was somewhere else. Colleen called Murray over and asked the patient to lie on the floor next to Murray. As many of you know, dogs have a very even steady breathing pattern. Colleen asked her patient to listen to Murray’s breathing and balance her own to the dog’s. This incident brought the patient back into the room and grounded the patient by bringing them back to the here and now.

Colleen and Murray work with the PTSD Soldiers Project. These men and women have seen serious combat on multiple tours. For many opening up and trusting is difficult. They are vulnerable and filled with anxiety. Murray calms PSTD patients down making them feel more comfortable because he immediately breaks the barrier.

“ I love Dr. Murray!” says Al. “Murray is a kind therapy dog, who always knows when you want accompaniment. He is always ready to greet you with the wagging of his tail, his kind stare, or my very favorite, a quick lay next to you to let you know he’s there.”

Today Murray is blind in one eye and naps a lot more, but he still accompanies Colleen to work and does his therapy duties helping Colleen treat her patients. His presence comforts Colleen’s patients.

In essence, Murray has given back to Colleen what Colleen gave Murray when she rescued him from the pound years ago.

It is these stories about those dogs that were saved from the shelter and turn around and rescue us that moves us to love dogs more.

This article was a finalist for a Maxwell Medallion Award in the 2018 Writing Competition sponsored by the Dog Writers Association of America.