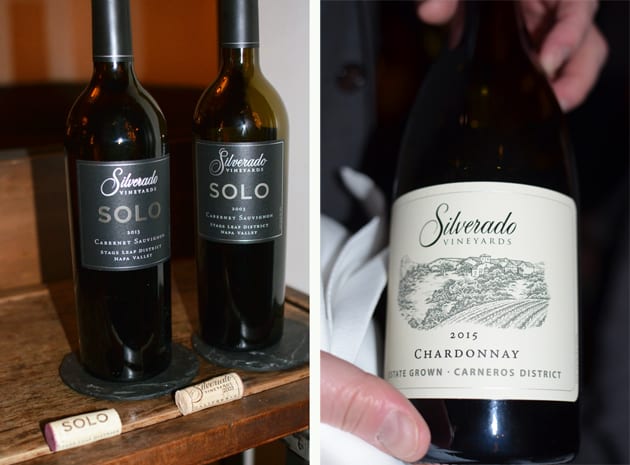 Revisiting some of our well-established wineries that were pioneers in making a name for the California Wine Industry is always a pleasure especially when you can see a winery’s growth and impact. It was fortuitous that I was invited to a dinner at Spago with Russ Weis, the General Manager of Silverado Vineyards. Here we explored some of the current releases of Chardonnay and Cabernet Sauvignon.

Prior to this dinner, my family and I had enjoyed a 1995 Silverado Sangiovese we found in our cellar. This wine was so impressive; it made me wonder about the status of this old-time Napa Valley winery. The dinner proved that Silverado Vineyards still has the vitality for making remarkable wines at the same caliber or better than they did in the 80s and 90s.

The history of Silverado Vineyards dates back to the late 1970s when Walt and Lillian Disney’s daughter Diane with her husband, Ron Miller purchased their first Vineyard in Yountville, Miller Ranch. At a young age, a trip to Paris in her teens was when Diane discovered the wonderful aromas of Rosé that her interest in wine began.

The family had been eying property owned by Sees, but it was not until 1978 that they were able to purchase this property in the Stag’s Leap AVA, now known as Silverado Vineyard. By 1988 knowing phylloxera had contaminated their Stag’s Leap vineyards, they purchased the Firetree Vineyard in Carneros and land on Mt. George, the northern acreage of the original Cedar Knolls estate, in what was to become the Coombsville AVA in 2011. The later was planted the following year to become Mt. George Vineyard. In 2000 they purchased the Vineburg Vineyard in Carneros.

As I am discovering the history and tasting the wines, two words describe Silverado, balance, and stability. It is not only the balance of the wine, which, of course, is superb, but it is a balance between the owners and the winemaking team. They work together. There is a balance between nature and the environment. The stability comes from longevity. Over the years, there have been two winemakers Jack Stuart and Jonathan Emmerich. I consider each a stabilizing factor in the creation of Silverado’s outstanding wines. They are the framework or the steadfast foundation.

Our meal started with the 2015 Estate Chardonnay Carneros. The wine combines the Dijon clone, which, as Russ says, is “Racy” with the Heritage clones. The Dijon ferments in small stainless steel barrels while the Heritage sees some oak. With aromas of Brioche and yeast, one finds flavors of pear and apple. The wine is the perfect melding of the Burgundian style with hints of some butter to bring out its California lineage.

The 2013 Geo combines primarily Cabernet Sauvignon with a small percentage of Petit Verdot. The wine ages 17 months in 38% new oak, with 75% being French and 25% American. With its rich bright fruit flavors and underlining hints of white pepper, this wine is quite impressive.

The other Cabernet Sauvignon featured on this evening was Solo. You might say Solo is a variation on a theme. The Silverado’s Stag’s Leap Vineyard when it was planted, was the third vineyard to grow Cabernet Sauvignon in the immediate area. What also is unique to Silverado is that over the years they created a new clone for cabernet. Today it is one of three Heritage Clones, known as FPS 30, that was given this status by UC Davis. Paying tribute to this Heritage Clone is what Solo is about.

The 2013 Solo ages for 18.5 months in 46& new oak, a mixture of predominately French oak with a very small percentage of Hungarian. The wine has egg white fining and reflects flavors that are characteristic to the Stag’s Leap Vineyard, plum, red currant and cassis cherries.   This Cabernet Sauvignon exudes the silkiness that typifies the Stag’s Leap AVA. The wine is velvety and has aromas of fennel and florals.

Finally, the real treat of the evening was when we got to sample the 2003 Solo compared to the 2013. Both were marvelous in their own right, but the 2003 showed the potential of the 2013.

Along with Nathan Fay and Warren Winiarski, who brought the name Stag’s Leap to the forefront, you could also say that Jack Stuart and today Jonathan Emmerich have continued that tradition by showing that Silverado Vineyards’ contribution to California and Napa are right up there as one of the best.