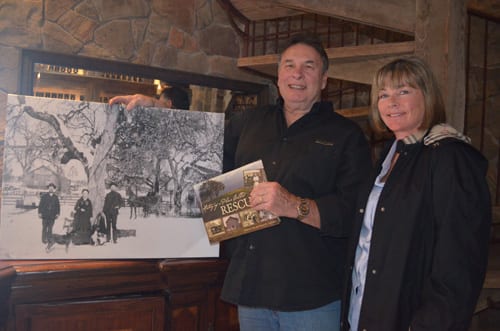 As one explores the world of wines, interesting connections are made between winemakers and owners. These experiences show how small our universe can be. On tour to El Dorado County, I discovered that someone I had known through real estate is now an integral part of the El Dorado wine scene due to a family legacy.

Carey Skinner, with her husband Michael, had established Skinner Vineyards and Winery. I had known Carey as the manager at Sotheby’s. It is not just the story of reconnecting but also the tale of the winery, taking you back to a time when miners were digging for gold in the Sierra Foothills. It is history in the making as one family seeks to discover their roots and explore their family legacy.

For Michael Skinner, it was a dream to one day own a vineyard, but it did not begin to come to fruition till the day Michael’s son, Kevin, and his wife were driving home from Tahoe and happened upon a marker on a map that said, Skinner. The two decided to investigate and found that a man named James Skinner had established one of the first wineries in the Sierra Foothills. Sharing this with his father, the family decided to do some more research.

Little did the Skinner’s know that this coincidence would have a drastic change in their future. The Skinner’s soon found that James Skinner, a Scotsman, was Michael’s great-great-great-grandfather. James Skinner, after a stint in Massachusetts in the silk business, had come to California to mine gold. Striking it rich, he purchased land and later built his winery. Today there are still remnants of this original winery in the town of Rescue

Immediately proceeding this discovery, the Skinner’s knew that they had to stake a claim on land in the Sierra Foothills, hopefully in the exact vicinity of their namesake. In 2006 they purchased the property in Somerset that is within a mile of the original Skinner Winery. Now known as Fairplay, the winery sits at an elevation of 2700 feet and offers a 360-degree view.

They enlisted Chris Pittenger as their winemaker. Today Skinner Vineyards’ main focus is on Rhone varietals and blends. In addition, maintaining their connections to the past, they produce many varietals that were originally grown by James Skinner in the 1800s, under their legacy brand called Six Horse. Under this label, they produce the Six Horse Zinfandel. Angelica, which is created from the mission grape and popular in the late 1800s, represents a wine the Skinner’s hope to create their version in the future.  They also plan on creating a port from late harvest Syrah.

Innovations Past and Present

In the 1860s, James Skinner was a forerunner in the development of the wine industry. One of his innovations was using the six-horse-powered engine to run his winery. Today the Skinner’s are not only honoring their heritage, but they are making their statement by respecting the environment. The winery is solar-powered and built with recycled steel. There is a herd of goats that roam the grounds keeping the brush at bay since the winery is located in a fire area. The goal is to be 100% organic in the near future. The tasting room incorporates features the Skinner’s discovered existed in the original Skinner winery that relate to their family legacy.

The various elevations of the vineyards add wonderful dimension to the wine. The lower levels, where the soil consists of quartz and red clay, adds a fuller, more rounded mouth and viscous quality to the wine. The upper slopes bring brightness and vibrancy to the grapes.

Over the year, I experienced many of the different wines from Skinner Vineyards and have been delighted with all of their wines. There are consistency and vibrancy inherent in their wines. They excel at promoting the true essence of what the terroir and elevations of the Sierra Foothills produce in the vineyards.

The first wine I tasted from Skinner was a Picpoul Blanc. This white grape is typically used for Rhone blends, but on its own, it is marvelous. Not many wineries create wine from this varietal, and Skinner is a winery that excels, showing off the virtues of this variety. The wine is like a Sancerre. It is herbaceous with a rich, creamy finish.

The Grenache Blanc was crisp with a hint of butter from the oak. There is a creamy quality to the wine.

Having sampled both the 2011 and 2012 Grenache. I found the 2011 to be an elegant wine that is a rich, smooth wine. It is styled like a medium-bodied Pinot Noir. You might say it is a Pinot Noir on steroids. The 2012 exhibited flavors of cherries with hints of sage. The wine is smoothly balanced with light spice and notes of sweetness on the finish.

The 2010 Six Horse Zinfandel is a big rich Zinfandel that shows the intensity typically found in the Sierra Foothills. Its structure is complex. The flavors of dark fruit, mostly cherries, are apparent and are enhanced with white pepper and cinnamon.

Recently the LA Wine Writers luncheon at the Angeleno Hotel featured Skinner Vineyards. We started with a comparison of the 2011 and 2013 Seven Generations. The 2011 is a blend of predominantly Roussanne and Marsanne with smaller percentages of Viognier, Grenache Blanc, and Picpoul included. This wine, with its citrus flavors, was smoother and more viscous. The 2013 consists mainly of Grenache Blanc and Roussanne with Viognier, Marsanne, and Picpoul. This blend is brighter yet retains its smooth qualities.

We moved on to the 2012 Grenache, which accompanied a Seared Ahi Tuna vegetable sushi tempura asparagus.

Our next course included both 2010 and 2012 Eighteen Sixty-one Red Blend. This Rhone blend, the Skinner’s consider their flagship wine and tribute to their family legacy.  It also pays homage to the date the original Skinner winery was established.

The 2010, which I have sampled on several occasions, I find very elegant and smoother. It is a blend of 47% Grenache, 23% Mourvédre, 23% Syrah, and 7% Counoise. This wine has lovely floral aromas and has flavors of currants.

Finally, our last course consisted of the 2012 Mourvédre and the 2010 Syrah. I had already sampled the 2011 and was deeply impressed. Like the 2011, the 2012 is elegant with floral aromas of violets and blueberry flavors. It aged 11months. This wine also is elegantly smooth and balanced. The 2010 Syrah is fuller-bodied but displays that smooth balance that is characteristic of Skinner wines. This Syrah had cherry flavors and hints of black pepper on the finish.

What started as a dream has become a passion, but not in the real sense of the word. It is not just fervor to make wine; it is a passion to return to the past and create a family legacy from what James Skinner created in the mid-1800s. While following the footsteps of the former Skinner, Michael and Carey are learning about their roots and, at the same time striving to create their own statement in the wine industry.

I must say that the quality of wine produced by Skinner Vineyards is extraordinary and elevates the status of wine in El Dorado County. They are also by far one of the most outstanding wineries in the region, and with the caliber and consistency of their portfolio, is one of my overall all-time favorites.

For more information and visiting: