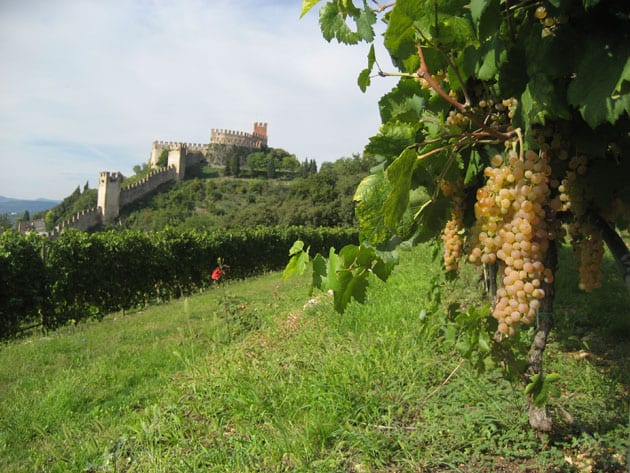 Rich and profound in its history, it is the new generation that makes its mark on the Soave region today. Similar to a rebirth where the old guard trends out, and the new moves forward yet still keeping the family tradition of winemaking but with innovations. This family tradition captures the essence of Soave, which is located in the Veneto Region of northern Italy near Verona, today.

Its iconic beacon, known as the Castello di Soave, signifies both the DOC and DOCG wines that this region represents. Soaring over the town of Soave, it also symbolizes the wine varietals recognized in this area. Garganega is the principal grape, but Trebbiano di Soave and Chardonnay are also permitted in small percentages. It acknowledges the dry still wine as well as the sparkling Spumante and the Passito.

Soave became a designated DOC region in 1986. A separate Soave Superiore DOCG was created in 2001. Soave consists of 13 municipalities and over 16,000 acres and divided into the following three sub-regions. In addition to Soave DOC, there is the Soave Classico Doc and the Soave Colli Scalige DOC.

The areas soil composition consists of either volcanic situated in the eastern and central part of the region and calcareous limestone soils found in the southern and western portions. These soils drive the flavors, acidity, minerality, and profiles of the Soave. The volcanic soils produce a riper, more viscous, and richer wine, while those of the calcareous soils are floral, citric, and refreshing with some chalkiness.

Discovering Soave, one must realize that this is a wine that can withstand some time. When Soave is first bottled, it does not represent what might be called the soul of Soave. It is best to let the wine sit in the bottle developing over the year after it is first released, to appreciate the qualities of Soave.

An excellent example of a winery that has an outstanding reputation for aging Soave is Filippi Winery. Located in the Colli Scaglieri region of Soave, the winery is housed in a 14 Century building. Colli Scaglieri is a sub-area with a separate DOC. Purchasing the property in 1920,  today, Filippo Filippi runs the winery. Utilizing Biodynamic and organic principles are the backbone behind Filippi wine.   The soils are volcanic with black basalt and show what extremely volcanic soils impart on the grapes and wine.

Two wineries stood out on a recent visit to Soave for the 2015 preview. The first is Coffele, a third-generation family-owned winery that started to become more known when Giovanna and Giuseppe Coffele Visco met in approximately 1971 and decided to revive the family’s legacy and history of cultivating grapes and making wine by establishing the Coffele Winery.

Giuseppe was a cherry producer and a teacher of Italian Literature. Giovanna’s family planted the original vineyards in 1854. Today a brother and sister team, Alberto and Chiara Coffele, run the winery. Alberto is the winemaker, and Chiara is the sales manager. The winery is situated on 25 hectares in the hills of Castelcerino di Soave. The winery is the highest and most northern vineyard in the Classico region. It was the first in the region to produce grapes from organic vines and also the first certified organic wine producer in the Soave Classico area. Alberto has a passion for horses and utilizes them in the cultivation of the vineyards.

Although young, the Castel Cerino is a very fresh wine with high acidity and aromas of wet stone and bananas. The Alzari, a more innovative wine, consists of 60% pressed grapes and 40% dried, making a more balanced wine with aromas of pineapple and banana. The wine ages 10 – 12 months in oak. Showing us the quality of the wines produced from Coffele, we sampled a 2002 Ca’Vinco. With its golden color, the wine was still very together. As an experiment, Coffele made a 100% Garganega with no sulfites. This wine also held well with high acidity and excellent color.

Cantina Franchetto is a family winery that started in 1982 and located in my most eastern portion of Soave, known as Terrossa. Terrossa also refers to the red soil of this area. It is very rich in minerals. Many of the vines are 50-60 years old. The Franchetto family roots have always been in farming, but around 1936 they went from growing table grapes to wine grapes.

Today Giulia Franchetto works with her father, Antonio bringing in the feminine touch to the winery. After graduating with a degree in enology, Giulia started working at the family winery in 2012. It is not only wine that ties this family together. They are a very musical family, each playing an instrument. Perhaps this melodious aspect of the family also imparts into the wine as if it plays its own song.

Giulia is an example of the trend towards more woman winemakers. Giulia’s influence could be seen in the 2015 La Capelina, a well-balanced wine with fresh white florals and mild citrus that brings forth a nice acidity and minerality. The wine was softer and more feminine in its delivery and texture on the palate compared to many wines samples at the 2015 Preview.

I found many other excellent wines presented at the 2015 Preview, but these two wineries represent the direction Soave wine is currently moving towards bringing a new concept to public awareness of the region.

Today not only are we seeing a new generation combine traditions with innovation, a new regime that seems to be creating a rebirth of the region but also women winemakers adding the feminine touch to the Garganega grape and the implementation of organic and more sustainable practices. These factors have brought a new adaptation to Soave and their wines. Soave’s growth as a wine region has moved forward by leaps and bounds since the 70s and 80s. It has moved past the old connotation of selling bulk wine.

Common to the wine and travel industry, this writer was hosted on this trip to Soave. While it has not influenced this review, the writer believes in full disclosure.