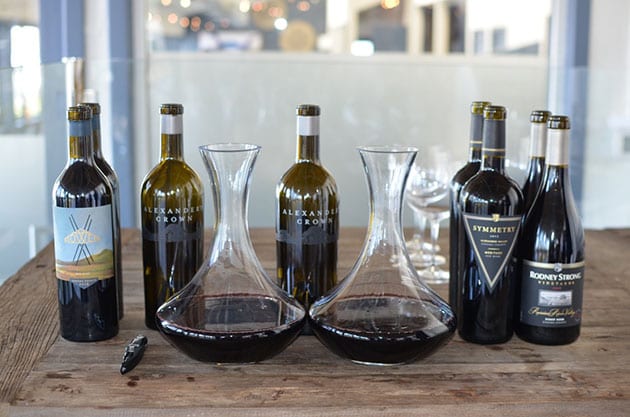 Building a base or a foundation is the center for any artist, musician, and also for creating wine. Those wineries that were the pioneers of the wine industry in the 1960s and 1970s laid the groundwork for California winemaking. One winery which played an important role in the establishment of the Sonoma County Wine Industry is Rodney Strong Vineyards. Observing the growth and alterations made over those years becomes part of a winery’s legacy. Like anything, a winery might need to reinvent itself or change to keep up with the times, and Rodney Strong Vineyards has adapted over the years.

Still, a family-owned winery that produces outstanding wine, we look at its beginnings when Rodney Strong had the vision to purchase the property, plant vines, and grow grapes. It started in 1959 when the winery became the 13th bonded winery in Sonoma County. Rodney had just retired as a dancer, having danced with some of the biggies in the business, Martha Graham and George Balanchine. Perhaps the elegant moves of his dancing days transcended into the elegance of his wines.

In 1962 Rod purchased a vineyard that later became Chalk Hill and famous for its Chardonnay. By 1968 he bought land in the Russian River Valley where he planted Pinot Noir. Two years later, he built a new winery in the Russian River location. By 1979 Rod stepped back from winemaking and hired Rick Sayre.

Tom Klein and Rodney Strong met during Tom’s tenure at McKinsey and Company. The company was evaluating the winery. This meeting was a cornerstone in both Tom’s and Rodney’s life. Although Tom came from an agricultural farming family, he pursued a career in business after graduating from Stanford. Tom’s love of wine and passion began around the time he met Rodney Strong because he ultimately convinced his family to purchase the winery in 1989.

Throughout the years, many changes occurred at the winery. These include becoming Certified Sustainable, a goal that all Sonoma vineyards are trying to accomplish. Rodney Strong is also Fish Friendly and carbon neutral. Conservation is now a big part of the winery program.

After graduating from UC Davis with a degree in viticulture and enology, Justin Siedenfeld’s career path took him to Iron Horse and Robert Mondavi. In 2010, Justin joined the winemaking team at Rodney Strong. In 2017 he began Director of Winemaking. One of his current projects is overseeing their new venture called Rowen.

In 2014 Rodney Strong not only received Wine Enthusiasts Winery of the Year Award, but the year also represented the 25th anniversary of the Klein Family’s ownership of the winery. Along the way, the winery accomplished many firsts.

Not only do the Klein’s own Rodney Strong, but they also acquire Davis Bynum and their newest project Rowen Wine Company. Rowen in the farming community refers to the second harvest of hay during a season, which is considered an unexpected windfall. For Rodney Strong Vineyards, the wines of Rowen represent that unexpected windfall because the winery strives to be better in both the vineyards and with innovation.

Rowen Wine Company produces Bordeaux style wines from grapes located at the high elevation Cooley Ranch. The Cooley’s have owned the property in Sonoma County since the early 1900s. Grapes were originally planted in the 1930s, but due to the site, elevation and equipment of the time became the challenge. Today the Cooley’s joined forces with Tom Klein and the Rodney Strong wine family to develop vineyards on the land. Hence Rowen was born.

The acreage planted consists of metamorphic, iron-rich greenstone and volcanic soils. The vines are planted on steep slopes ranging in elevation from 800 to 2,040 ft. These factors reflect the uniqueness of the wines.

2018 Rosé of Pinot Noir Russian River Valley: The grapes are picked for Rosé. The Rosé displays higher acidity that delivers a fresh fragrant wine with aroma flavors of peach and strawberry.

Both the labels for the Rosé and Sauvignon Blanc, in its own way, showcases the wine inside the bottle. The organic vegetation on the label signifies the freshness of the wine within. It is a nice contrast to the rest of the Rodney Strong line-up.

2016 Chardonnay Chalk Hill: This vineyard is famous for its Chardonnay and tasting this wine, one knows why. Chalk Hill is known for its volcanic and clay soils, which include Rhyolite soils. As ash fell, it became chalk-like, hence the name Chalk Hill.

The wine barrel ferments in new and seasoned French oak followed by aging for 12 months. The wine delivers a creamy, crisp quality and exhibits flavors of pear with spice on the finish.

2016 Pinot Noir Russian River Valley: This is a wine that you can smell the Pinot Noir and its wonderful spices. As Justin Seidenfeld describes the wine, “ It screams of acidity.” I found baking spices on the nose and a very drinkable wine with a softer quality, displaying red fruits like cranberry and cherry.

2015 Alexander’s Crown Cabernet Sauvignon: This single-vineyard wine consists of four clones of Cabernet. The wine ages 27 months in 76% new French oak. This rich, voluptuous wine reveals flavors of dark blue fruits with hints of anise. Of the reds sampled, this wine exhibited the most Bordeaux like qualities.

Rowen 2015 Red Wine: Combining mostly Cabernet Sauvignon with Malbec, Syrah, and a smidgeon of Viognier, the wine ages 24 months in French oak, 50% new. I found a very drinkable wine with aromas of raspberries mocha and pepper and flavors of dark fruit mixed with baking spices.

600 L 2015 Cabernet Sauvignon: A favorite of the tasting, the wine consists of Cabernet Sauvignon and Petit Verdot. Aging 24 months in 100% new French Oak creates a wine that shows the passion and love of Winemaker Justin Seidenfeld.

Rodney Strong has come a long way from its beginnings, and with Tom Klein, at the helm, the wine continues to surpass the prior year giving this wine a legacy that will continue for decades to come.

Note: Common to the wine industry, this writer enjoyed a hosted wine tasting luncheon. While it has not influenced this review, the writer believes in full disclosure.