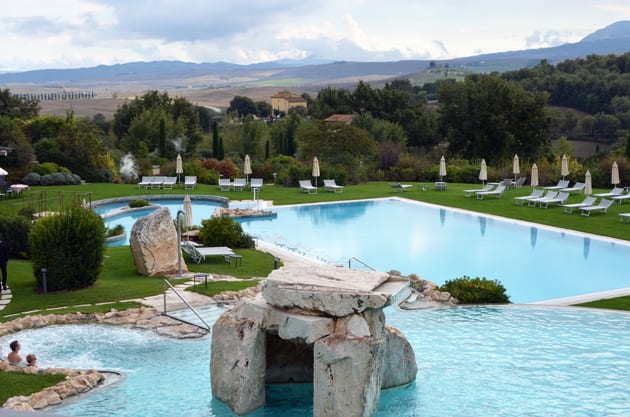 The dress code during the day is bathrobe chic, while the environment is pure pleasure and relaxation set amongst the Tuscan hills near the village of Bagno Vignoni in Italy. It is easy to see why the 5-star Spa Hotel Adler Thermae Wellness & Spa Resort is one of Italy’s leading wellness hotels. It is the perfect way to end a trip to Italy—and an adventure all onto itself.

Detoxing from a trip of wining and dining, the Adler Thermae Wellness & Spa Resort did that and more. Not that I had to go cold turkey on wine. Being in the center of one of the greatest wine regions in Italy, I continued to find delight in the region and its wine as the spa encourages the enjoyment of wine.   This is especially true since the hotel now has its own winery and their wine list has more than 500 selections.

History and Location of the Spa Hotel Adler Thermae

The Sanoner family opened the Spa Hotel Adler Thermae Resort in 2004. They own four hotels, including the Tuscany resort. The family’s hotelier days go back to the 1800s when Josef Anton Sanoner acquired his first hotel, the Adler Dolomiti. All of the Adler Spa Resorts have gorgeous settings and spa offerings.

When the Sanoner family visited Val d’Orcia in 1999, they fell in love with the area at first sight. It was the thermal spring in Bagno Vignoni that attracted them. This same thermal spring supplies the water to the thermal pools today at Spa Hotel Adler.

The Hotel at Spa Hotel Adler

Designed like a villa, all rooms at Spa Hotel Adler look out to a vista that encompasses the Hotel’s central gardens and the Tuscan hills. The guest suites are centered on the spa as the various levels of the hotel unite at the spa. The hotel features the indoor/outdoor pool, sport pool and kids pool. There is also the “Argillae” mud bath, Finnish saunas, steam saunas, and the secluded underground “Saline Grotto” and the spa. Of course, there is also a fitness club and restaurant.

There are a total of 90 rooms at Spa Hotel Tuscany Adler Thermae Wellness & Spa Resort. My suite was a ground floor room with a private terrace and breathtaking views of the rolling hills. The wood finishings and hardwood floors give the room a warm and cozy feeling.

Each room has a sitting area and marble bath. My room included a bathrobe and flip-flops so I was all set for a day at the spa. Even the bath incidentals like the shampoo, conditioner and lotion are special. This was my home for three days and I found it quite comfortable. For those with children, there are 12 family rooms at the Hotel Adler.

The Grounds of the Spa Hotel Adler

Picturesque is the best way to describe the grounds at Spa Hotel Adler as I watched the steam rise from the thermal pools. There are several walking paths around the hotel that lead to nearby villages, including Bagno Vignoni.

During my spa tour, a rainbow appeared on the horizon overlooking the lake with the olive wood sauna and the Watsu steam bath. Looking back this was a promising forecast of the relaxation my body and mind would encounter.

My visit included two massages that left me extremely relaxed and was just what I needed before returning to the United States.

Often when I travel my ankles swell. Swimming in the thermal springs and using the various jets located around the pool remedied the problem. I also had a session in the saline grotto pool.

This is an excerpt from an article I wrote for Wander With Wander.