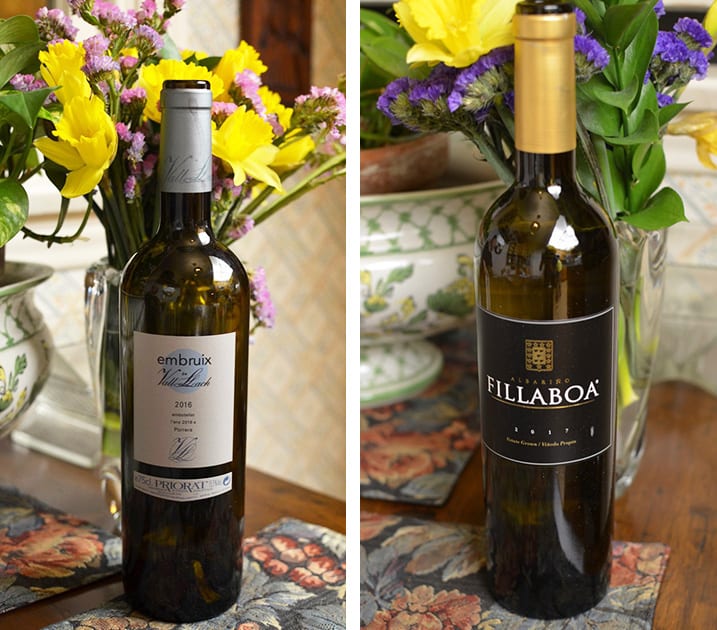 Let’s delve into the wines from two specific wineries in Spain. Both exemplify the wine regions they represent, but together they tell the inherent story of Spanish Wines.

One sees the Spanish affinity to the white varietal Albarino as profound. The variety is probably Spain’s most popular white. Most Albarinos come from the Galicia region, also known as green Spain due to the climatic influences of the Atlantic. This area is wetter than in other regions of Spain. Within the Galicia is a subregion called Rias Baixas, an area that produces most of Spain’s Albarino.

One winery, Fillaboa, produces only estate-grown Albarino. Fillaboa means the good daughter because the tale told says that a count left his best land, “Fillaboa” to his youngest daughter causing a riff with his other daughters.

Fillaboa is one of the oldest and largest estates in Galicia dating back to the 14th century. Since 2000 the Masaveu family has owned the estate, and today the property is one of the Grandes Pagos de España, Great Estates of Spain.

I sampled the two Albarinos Fillaboa produces. The first Fillaboa 2017 represents Albarino that grows in granite-rich soil. The wine ferments in stainless steel than ages 4 -6 months. On the nose, I found aromas of fresh fruit, especially pineapple. On the palate flavors of pineapple and apple dominated.

Unlike the first Albarino, the second, Selección Finca Monte Alto 2016 ages sur lees for an average of 12 months. The wine is bright with nice acidity and some effervescence. I found aromas of Grapefruit, pineapple and pear and flavors of pineapple leading to a little spice on the finish.

The other winery is located in Catalonia; the Priorat region is one of two regions to garner the DOQ designation.  Rioja is the other. Priorat’s vineyards are located in a National Park and known for their steep and terraced old vines. The soils are volcanic and called Llicorella, which combines quartz and slate. The climate is continental with the added effect of the Mistal winds. The region typically produces bold, complex red wines.

Established in 1992, Vall Llach owners by Enric Costa and Lluis Llach chose Porrera for their winery location. Porrera is one of many towns and villages that make up the Priorat DOQ. Vall Llach’s first vintage occurred in 1998. With vineyards located on slopes and ravines, the growing of vines can be arduous and challenging, but the outcome that one observes in the wines they drink is superb. The toils are worth it as the wines speak of these challenges. Vall Llach vineyards range from 90 to 110 years old and are mostly planted with Cariñena and Grenache.

I started with the Mas de la Rosa 2015, the flagship wine of Vall Llach, a wine composed of 100% Cariñena. The grapes come from a specific site in one vineyard, a rocky hillside that bears the name of this wine and means Rose’s Farmhouse. Unique to the site is the 80º slopes with soil consisting only of slate rock that forces the vines to delve deep into the soil for water. The winemaking process involves 50% of the wine fermenting in French barrels and the other 50% in stainless steel after which the wine aged in French oak for 16 months. I found aromas of dark cherry, and on the palate, this balanced earthy wine delivered flavors of dark fruit and currant.

Porrera Vi De Vila De Vall Llach 2015 consists of Cariñena from old vines blended with a small portion of Garnacha. The vines are considered the finest old vines in Porrera. Like Vall Llach’s flagship wine fermentation occurs in French oak barrels and stainless steel followed by 14 months of aging. This full-bodied, well-balanced wine delivers pepper on the nose and flavors of dark stewed fruits, notably plum, with hints of mocha and a peppery finish. This wine also displays texture and structure.

Idus de Vall Llach 2016 blends estate grapes with those of many different grape growers with old-vine Cariñena and Garnacha. The winemaking process is very similar to the Porrera. The wine delivers bright red fruit and blueberry along with some blackberry and stewed fruit. This balanced wine comes across as fresh and alive, more so than most red wines. There also were some veggy aspects on the finish.

Finally, the Embruix de Vall Llach 2016 consists of a unique blend of Merlot, Cariñena, Garnacha, Syrah, and Cabernet Sauvignon. One might call this wine a Spanish Bordeaux. This wine utilizes grapes from vines 30 years old or less — the wine ferments in stainless steel and aged 12 months in French oak. Dark fruit, stewed prunes, and currant flavors bring forth this wine’s earthy minerality and underlying sweetness.

The story of Spanish wines begins with the old vines of Priorat that signify the history and legacy of Spanish wines while Albarino from Rias Baixas has its roots in the past, but it also has a foot firmly planted in the future.

Common to the wine industry, this writer received hosted wine samples of these Spanish wines. While it has not influenced this review, the writer believes in full disclosure.