One of the beauties of wine is its ability to age and develop over time. For a wine writer, it is a delight when a winery offers to let you explore some of there oldies and in the case of wine goodies. The best way to observe this maturity and development is a vertical wine tasting. This type of tasting highlighted a wine tasting entitled The Art of Aging, presented by Stag’s Leap Wine Cellars.

This recent wine tasting featured three vintages of each the Fay, S.L.V., and Cask 23. All three are iconic wines that have played an important part in the history of Napa and the California wine industry. It began when Nathan Fay, a grape grower, planted in 1961 the Fay Vineyard in what is now known as the Stag’s Leap District. 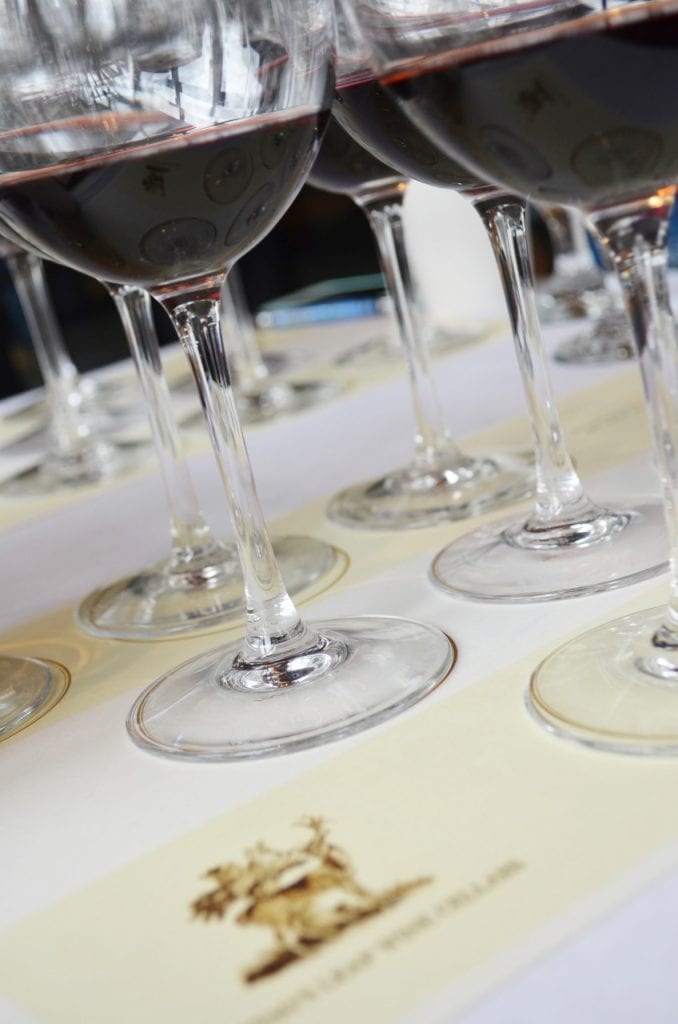 In 1969 Warren Winiarski sampled Nathan’s Cabernet Sauvignon and became hooked on the area. By 1970 had purchased the adjoining land to become the winery’s first vineyards, Stag’s Leap Vineyards, AKA S.L.V. In 1972, Winiarski built the Stag’s Leaps Wine Cellars winery and released his first vintage. Warren Winiarski and Stag’s Leap Wine Cellars made history in 1976 with “The Judgment of Paris.” With three-year-old vines, its 1973 S.L.V. Cabernet Sauvignon won the top honors over Bordeaux and changed the way the world looked at not only California wine but also the American wine industry. Ironically this occurred during our bi-centennial.

Cask 23 was developed in 1974 when prominent consulting winemaker, André Tchelistcheff, tasted through the various lots of S.L.V. and discovered one exceedingly outstanding cask that merited bottling on its own. The wine was named after the type of cask used for aging. Today Cask 23 is a blend of the most exceptional fruit from both the S.L.V. and Fay Vineyards.

It is interesting to note that the terroir of the Fay and S.L.V. Vineyards are very different. The soils of S.L.V. are more volcanic, enhancing the structure and complexity of the wine. Fay’s soils are more alluvial, giving the wine more elegant softer qualities. You might say the wines from S.L.V. are masculine, while those from Fay are more feminine. The differences in these two terroirs come together in the Cask 23.

In 1986 Stag’s Leap Wine Cellars acquired Fay Vineyards from Nathan Fay. Stag’s Leap District became an A.V.A in 1989. The first release of a separate Fay Vineyard bottling was in 1990. The partnership of Ste. Michelle Wine Estates purchased the winery and the Antinori Family in 2007, and they continue carrying on the legacy and wine traditions set forth by Warren Winiarski. Today winemaker Marcus Notaro is at the helm filling those footsteps. Looking back, both Fay and Winiarsky were pioneers who forged the path in making Napa what it is today. 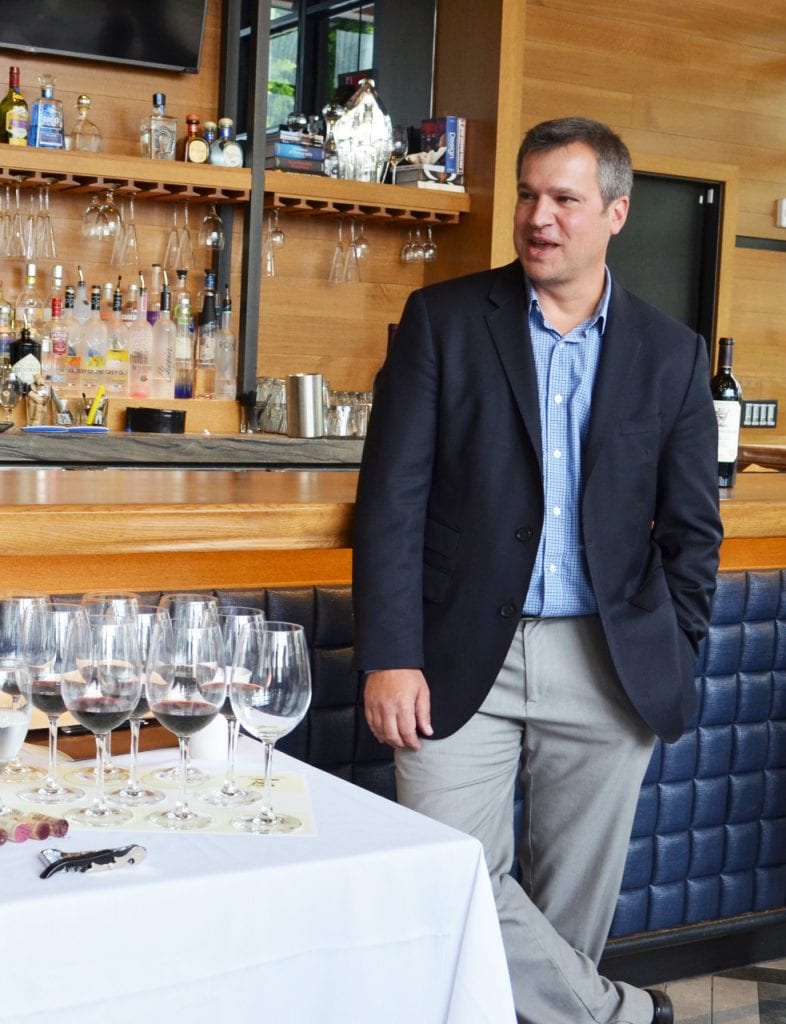 Three primary factors are essential to making a wine suitable for aging. The first is the site and its location. The second is the style in which it is made, which includes the balancing of all components. Lastly, it is the cellar. The term cellar reflects both the cellar at the winery, the method of storage in our homes, and the barrels and the temperature the wine during aging. The combination of these determines the longevity of a given wine bottle.

It goes without saying that the wines from Stag’s Leap Wine Cellars speak for themselves. Our exploration into the wines of Stag’s Leap Cellars began with a sampling of Fay from 1990, the first year Fay was bottle separately. This Cabernet Sauvignon emphasizes what made Warren Winiarski decide to bottle this wine on its own. With its garnet color, the aromas are that of cherry, leather, vegetables, and cinnamon. For 1990 the fruit is still ripe with elegance and balance. There are hints of dried herbs, and the wine is medium-bodied. At the time, it aged 14.5 months in new French oak.

Unique to the 2002 Fay is this was the last year that a bottling included fruit from the original 1973 planted Block 8. In the mid-1990s, with the exclusion of Block 8, which was uprooted after the harvest of 2002, the Fay Vineyard was replanted. This vintage is a blend of 95% Cabernet Sauvignon, 4% Merlot, and 1% Petit Verdot. It aged 23 months in French oak. The color was purple to garnet and revealed a fuller-bodied wine that was more velvety in texture and showed off the red fruit with a long finish.

Since 2012 is considered a fabulous vintage across the board, it stands to reason that the 2012 Fay is outstanding. It is a little shy at this point, but with time on its side, it could prove to be a real winner. This Cabernet aged 24 months in 85% new French oak, showcases the red fruit qualities the Fay Vineyards are known for in a silky and more elegant way. 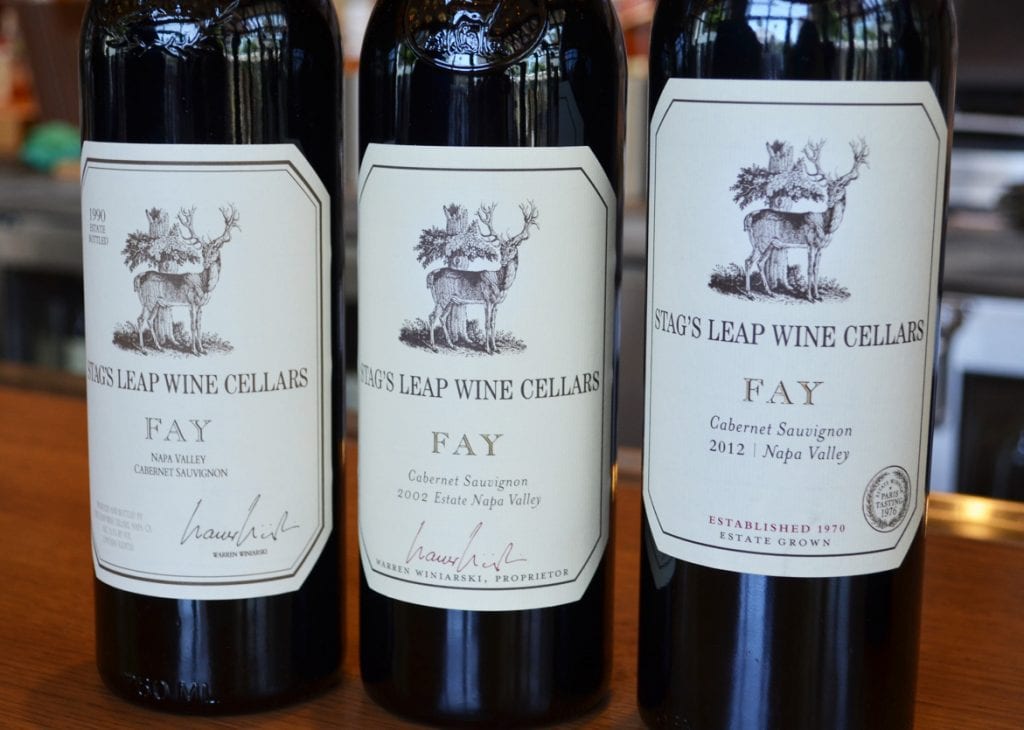 Moving on to the S.L.V., the 1996 vintage was more challenging due to weather conditions, and the crop was smaller. The wine was a blend of 96% Cabernet Sauvignon and 4% Petite Verdot that was aged 20 months in French Oak. The result today was an earthy wine with flavors of black current, raisins, leather, and cocoa.

The 2008 S.L.V. represents the first release of what might be called the second chapter in the life of Stag’s Leaps Wine Cellars. It is the 35th vintage and the first under the union of Ste. Michelle Wine Estates and the Antinori Family of Tuscany. This vintage was also more challenging because there was a late frost followed by a heatwave. This vintage also includes one of the original blocks planted in 1972. The wine aged 24 months in 87% new French oak. From the wines sample, this vintage was bigger and velvety with flavors of dark fruit, blackberry, and hints of spice. The wine was very together.

The final S.L.V. was the 2012, a wine perfumed with Lavender aromas and dark fruit bringing forth a marvelous richness and vibrancy. It is a wine that makes a big statement. It aged 21 months in 100% new French oak. 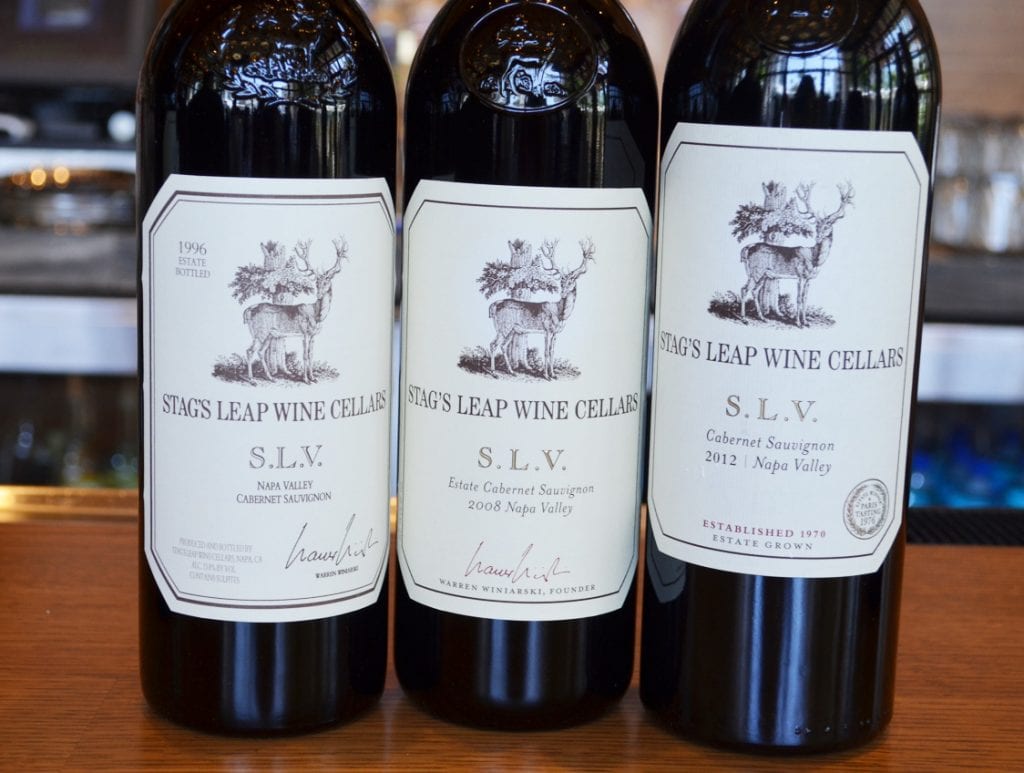 You might say the “Piece de Resistance” was the Cask 23, which is an extraordinary wine created when the winemaker deems the grapes from Fay and S.L.V. are the most exceptional and finest. We started with the 1979 Cask 23. It was amazing to see how bright and together this wine was for its age. This year was considered a cool vintage for Napa. Since Fay was not a part of Stag’s Leap Wine Cellars, this wine consists of a blend of 97% Cabernet Sauvignon and 3% Merlot from S.L.V. only. The elegance of this softer silkier wine was unbelievable and shows the strength and longevity of the Stag’s Leap Wine Cellars brand. It was the ultimate expression of S.L.V.

The 1997 Cask 23 is a blend of 95% Cabernet Sauvignon and 5% Merlot that aged 22 months in French Oak. It is bright and more intense and seems as if the grapes from Fay Vineyard softening the more masculine side of S.L.V.

With 2012 being an even growing season it can be said that the Cask 23 is an equal blend of both Fay and S.L.V. The wine aged 21 months in 95% new oak. You might say this wine perfects the yin/yang of both vineyards as the grapes from S.L.V. volcanic soils meld with those from the alluvial soils of Fay in total harmony. The wine is rich, velvety, and balanced. 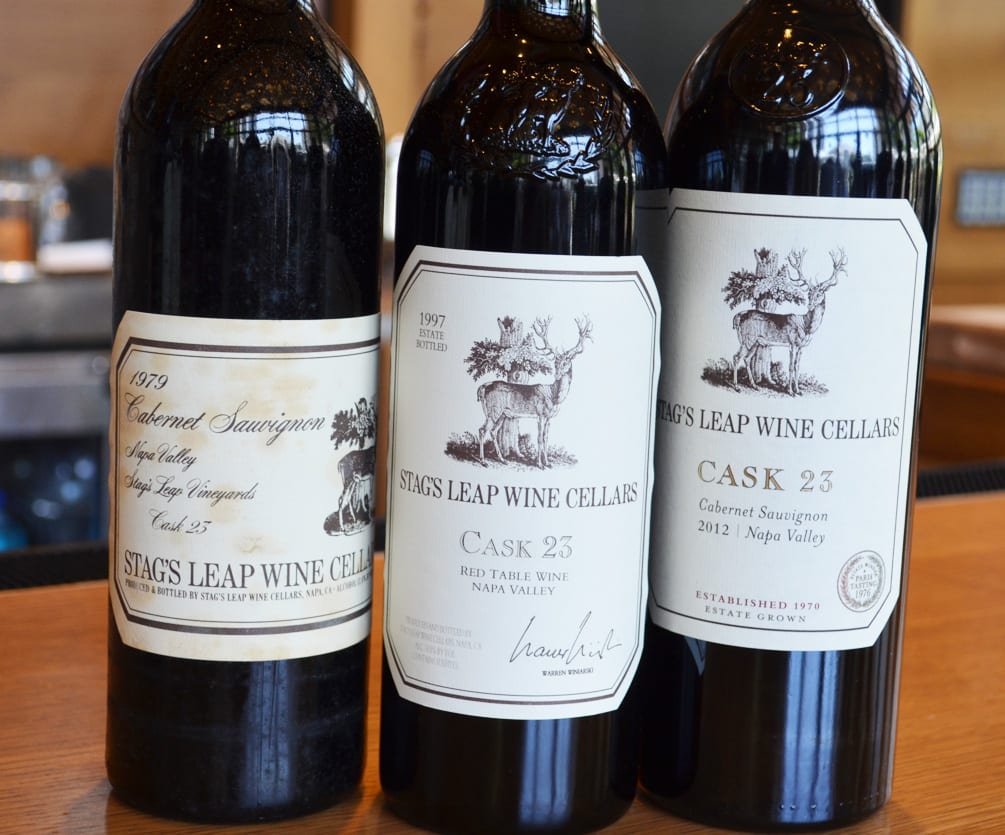 One could not ask for a more ideal wine tasting. For those who experienced the rise of Napa Valley in the 1970s and saw its continual upward movement through the 80s and 90s, the tasting felt like a trip down memory lane. For the younger generations, it was a glimmer into a pioneering wine era. At the same time, the experience emphasized the importance of maintaining those essential roots that now make Stag’s Leap Wine Cellars what it is today.