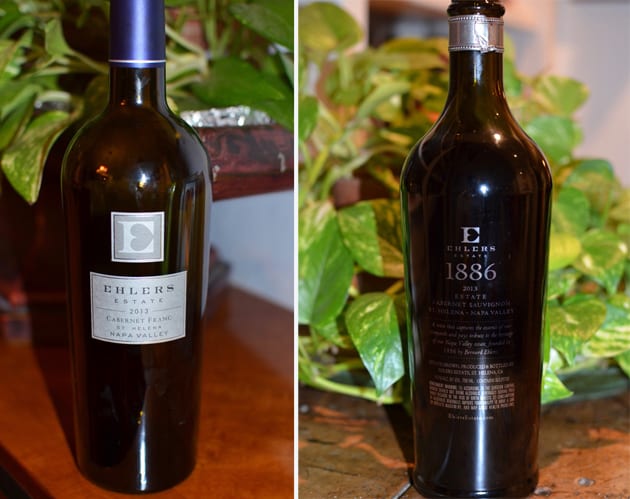 Yearning to discover a new winery can be the most intriguing part of attending a wine tasting and this year’s Stars of Cabernet, presented by WineLA, provided an opportunity to experience some superb wines from wineries not yet on Written Palette’s radar. There were six wineries that made an impression along with one old favorite.

Beginning with Ehlers Estate, a winery located in St Helena that takes pride in its history.   The winery’s legacy began in 1885 when Bernard Ehlers, a Sacramento grocer who made his money selling prospecting equipment during the gold rush arrived at the property then known as Mound View. It was in 1886 that he finished the stone barn, which today is the main winery building. That same year the Leducq family started their linen business in France. At the time the winery was one of 140 wineries in Napa. During prohibition, the winery took on a more colorful yet dubious image because bootleggers, Fred and Manny Domingos owned the property. The winery known then as The Bale Mill Winery was one of 26 wineries that remained in the area.

In 1987 after being introduced to some of the top Chateaus in France, Jean and Syviane Leducq purchased the vineyards and enlisted the French enologist, Jacques Boissenot to replant. It was not until 2001 that the Leducq family obtained the stone barn winery and the original portion of the property that was planted with olive trees. Today the winery encompasses 42 acres and is run by the Lequcq Foundation with winemaker Kevin Morrisey at the helm. The vineyards are certified 100% organic.

The wines are the Ehler Estate’s true legacy, especially the 1886, which pays tribute to both Bernard Ehlers, who completed the winery in 1886 and the Lequcq family because their linen business began in that year. It was this endeavor that ultimately brought the Lequcq’s to Napa to create the wines they do today. The 2013 blends mostly Cabernet Sauvignon combined with small percentages of Cabernet Franc, Merlot, and Petit Verdot. I Found a full-bodied fruit-forward wine. Most impressive is the wine’s balance. Its bright cherry flavors give way to subtle spicy nuances. This is a divine wine that not only is drinkable today but also has marvelous aging potential.

There are not many Cabernet Francs that knock one’s socks off but the Ehlers Estate Cab Franc is one of those that ranks up there with the likes of Crocker & Starr as well as Lang & Reed. The 2013 is 100% Cabernet Franc and delivers a full-body wine that is rich and velvety with aromas of currants, flavors of cherry and at the same time maintaining earthy qualities that are inherent in this varietal.

The 2013 Merlot is also marvelous, a full-bodied wine that expresses more of the left bank of Bordeaux in it demeanor.

Although the J. Lequcq Cabernet Sauvignon, a single lot, single vineyard was not sampled, it is another 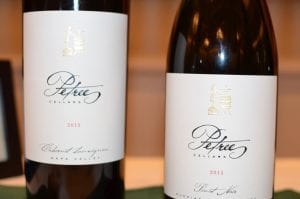 wine that pays tribute to the family’s wine legacy. The winery also makes a Petit Verdot and a Rosé and will be on the radar to try in the future.

Kevin Morrisey’s pursuit of balance and structure, as well as his dedication to letting the terroir shine through, are quite evident in all the wines, making this winery one to put on your wine bucket list.

Petree Cellars has been making wine since 2007. Like many wineries, it started in the garage of Rob and Felicia Petree’s home. Today their production has grown to 600 cases and they include three wines, Chardonnay, Pinot Noir, and Cabernet Sauvignon. 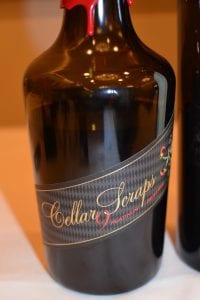 Tasting all three, the Pinot Noir and the Cabernet stood out. Both wines had an inherent brightness to them. The Pinot Noir was light with flavors of red fruits and slight hints of pepper. The Cabernet Sauvignon also exhibited a lighter style with a predominance of red fruit accented by clove and pepper.

A fun and different take on a Meritage blend is the Sherwin Family Vineyards Cellar Scraps #9. Think the Solara method of making Sherry meets the leftover wine that was not used in a premium blend and you have the basis for Cellar Scraps. The wine is a non-vintage utilizing three distinct vintages of wine. The blend consists primarily of Cabernet Sauvignon combined with Cabernet Franc, Merlot, Petit Verdot, and some Petite Sirah for color. One finds a very drinkable well balanced full-bodied wine.

Neal Family Vineyards has been growing grapes in Napa for over 50 years and making wine for the last 15 years. Of the four wines sampled two were favorites. The 2012 Cabernet Sauvignon Napa Valley consists of grapes from five different vineyards. They age the wine for 2 years but in the first year, each vineyard ages separately. The five separate vineyards are blended together and aged an additional year.

CAMi Vineyards was started as a family project to unite the Shelton family.  The vineyards were purchased in the early 2000s and were planted with Cabernet Sauvignon and Merlot. In the beginning, 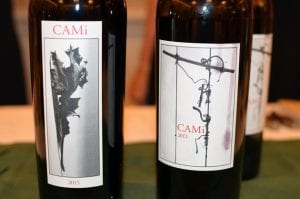 the grapes were sold to St Clement but after Laurie Shelton’s husband passed away, she decided to try making wine. At first, the wine was just for family and friends but discovering the virtues of the 2013 vintage, she decided that a portion of the fruit would go into her CAMi wines. The wines are a tribute to Laurie’s late husband Tom Shelton, a well-known figure in the Napa wine scene.   The 2013 Red Wine Blend is 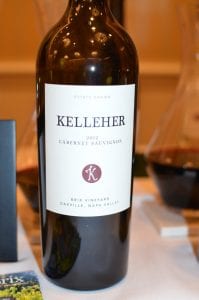 a blend of primarily Merlot, Cabernet Sauvignon, and Petit Verdot. I found the wine exudes dark fruits with hints of chocolate.

Kelleher Family Vineyard is a 10 acres parcel located in Oakville. The family owns Brix Restaurant and named their vineyard after the restaurant. Winemaking started when restaurant patrons would ask if they made wine from the grapes on their property. It was in 2004 that the family decided to have a go at producing wine. A favorite of the wines sampled was the 2012 Cabernet Sauvignon, Brix Vineyard. I found a brighter full-bodied Cabernet that delivers flavors of dark fruits. 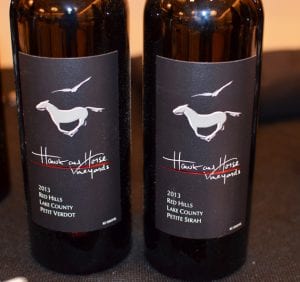 It is always a pleasure to revisit the wines of Hawk and Horse Vineyards. With grapes grown biodynamically, the wines are always well integrated and balanced. Although both the 2011 Cabernet Sauvignon and 2013 Petite Sirah were excellent, the 2013 Petit Verdot grabbed me.

Ian Blackburn’s gift for bringing to the public an outstanding selection of wineries is impressive. His WineLA events expose wine enthusiasts to a multitude of excellent wine choices in an inviting atmosphere.