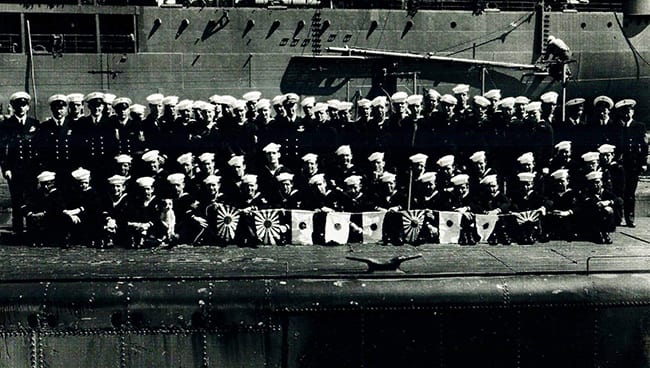 On Memorial Day, we honor our Military, who served our country. What about the military dog and military mascot that served during combat? This story is about Sugie, a sea dog and military mascot of the USS Besugo SS321. The submarine saw five combat tours during World War II. My father-in-law, Morris Bornstein, was one of the original crew members and stayed with the boat for three patrols. He was a quartermaster third class as a radar and sonar operator. Although he did not tell me the story of Sugie during his lifetime, the tales of Sugie come from his son, my husband, Ken Bornstein.

Dogs for eternity have been man’s best friend, both on land and sea. During World War II, many submarines had canine companions that touched the crew’s hearts and made days aboard less tedious and more cheerful. Many of these sea dogs got ID tags and received military records. Like the Commander of the ship, these dogs commanded the hearts of the sailors on board.

The Besugo, a Balao-class submarine in the United States Navy, was laid down on May 27, 1943, at General Dynamics Electric Boat Company, in Groton, Connecticut. The boat launched on February 27, 1944, and was commissioned the Besugo on June 19, 1944. The Besugo was assigned to the Pacific fleet. During its patrols, it sank a German Submarine, a tanker, a landing ship, a frigate, and a minesweeper.

A crewman found a stray brown and white dog in Groton, Connecticut, and brought it onboard prior to the Subs first commission. This six-week-old puppy joined the commissioning party wearing a blue jumper. The Commander, Thomas L Wogan of the Besugo, decided having the dog on board would be a good idea for bolstering the morale of his crew. The crew named him after the boat and called him Sugie. He soon became their military mascot and known as the canine submariner.

Sugie’s name to fame was he detected depth charges well before the crew. Sugie was frightened of them, but he became the crew’s alert system. He either started whining or put his head down on the deck when he heard the clicking of the fathometer on the depth charge.

When Sugie was not alerting the crew to the next blast, you found Sugie curled up on an empty bunk snoozing away. Typically, he slept on his back and insisted on a pillow. Most likely, he would trade off his bed partners by sleeping with various crew members since they were on eight-hour shifts.

Now one would ask where does this canine submariner do his business. Sugie’s dumping ground was the forward torpedo room. Fortunately, the room had steel grating on the floor, so the crew quickly hosed everything down into the bilge.

Being a military mascot, Sugie got to indulge in some of the crew’s pastimes like drinking beer and whiskey. Torpedo juice, a concoction made of alcohol and torpedo fuel, was not his thing. Yes, Sugie was a beer dog, and he liked to eat what the crew ate. The big hit on the Sub was homemade ice cream, and Sugie got his share. Sometimes Sugie would insist on a specific bowl to have his dinner served and would not eat until he got his way. On other occasions, he enjoyed sitting in a chair while crew members spoon-fed him. If soap or socks were missing, the crew knew where to find them.

The crew of the Besugo received a citation, and that honor included Sugie.

After the final combat tour in 1945, the Commander adopted Sugie. He lived the rest of his dog life with him.

Sugie played a vital role in the lives of the men aboard the Besugo. His unconditional love supported them during harrowing times. He entertained, bolstered their morale, and at the very least, he was a crew member. Life aboard the Besugo was life with Sugie. He was a war dog and military mascot to be remembered.