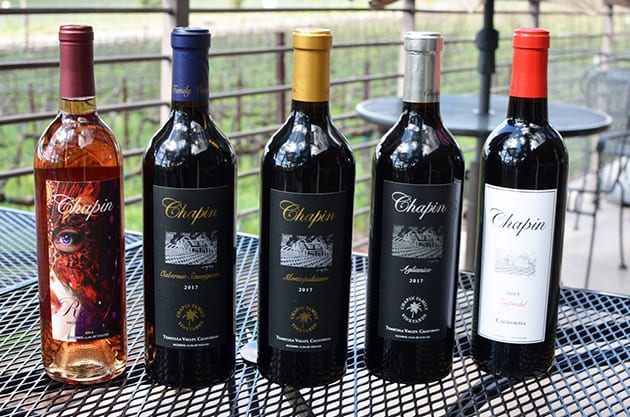 My last excursion to visit a winery before the sheltering in place went into effect in Los Angeles took me for a day to Temecula to visit Chapin Family Vineyards. What makes Chapin stand out is the Italian varieties they produce. Although Chapin focuses on red wine and two that are unusual for Temecula, Montepulciano, and Aglianico, which I consider Chapin’s signature wines.

Steve Chapin was a microbiologist working in the San Diego area. After graduating from the University of San Diego with a graduate degree and a stint in the Navy, he became a medical technologist and public health microbiologist for San Diego County.

Becoming tired of the close quarters of a laboratory, Steve ventured out into the business world where he worked at Roche Diagnostics. This job enabled him to tour the world, and at the same time, it enabled him to discover the world of wine because he had to wine and dine his clients.

After getting the wine bug, Steve decided to plant his vineyards on some land he owned in Temecula. Initially, he planted five acres with Syrah, Cabernet Sauvignon, and Petit Verdot in 2002. Several years later, he planted another six acres with Viognier, Aglianico, and Montepulciano. His first vintage, a Cabernet Sauvignon in 2004, was released in 2007. Today he makes fifteen different wines and has 14 acres planted. Nine of the acres are in the location of the tasting room.

From Steve’s microbiology background, he likes innovation and loves creating wine trials. It could be experimenting with the oak of hybrid barrels. He applies his scientific technology to his winemaking prowess. From his background, he calls wine a different kind of blood where you experiment with organic chemistry. 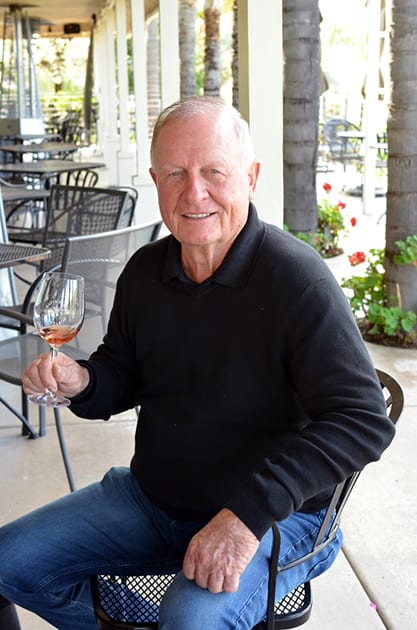 In the vineyards where the grapes are dry-farmed, Steve utilizes a crimper that he created that rolls over the cover crop in his vineyards. This machine crushes the cover crop rather than cutting it down like a mower.

The vineyards contain a lot of potassium in the soils, which elevates the PH. In addition, the terroir can be rough and gravelly, which is suitable for Aglianico. To bring out the intensity of the Aglianico and the Montepulciano, Steve drops fruit after version and also because Montepulciano overproduces. 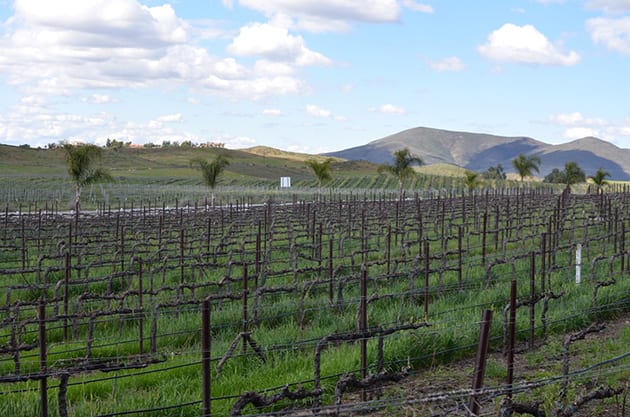 On average, the red wines age anywhere from 20 to 24 months. The barrels utilized are approximately 60% French oak and 40% American Oak. The wine barrels consist of 60% new oak, 20% two-year-old oak, and 20% one-year-old Oak.

The tasting room draws you in with it lush gardens in the front and large veranda type patio in the rear that overlooks the vineyards and Temecula Valley.

You might even have a chance to see the winery vehicle, a 1947 restored truck  in all its Art Deco glory. 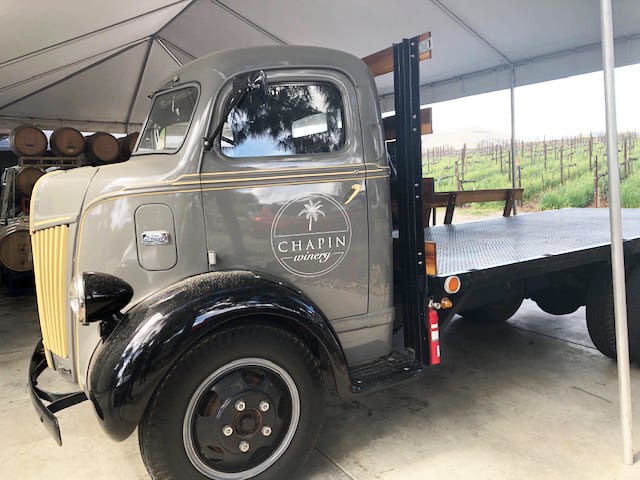 Chapin is known for their reds, but I did taste their 2018 Chardonnay and the Rosella. One consistent attribute in most of the wines seemed to be a rustic quality that I rather liked. Perhaps this characteristic reminded me of Tuscany and the varieties that grow in that Italian Region.

The Rosella represents a Rosé of Montepulciano, made with the Saignée Method, where some of the red juice bleeds off to produce Rosé. The wine ferments in wild yeast producing a very dry wine with copper color. I found nice perfumes on the nose and flavors of grapefruit and orange. This wine has a soft quality. The label is quite different and fun compared to the designs on Chapin’s whites and reds. The coppery hues of the label showcasing a masked woman accented the Rosés. Having never sampled a Rosé Montepulciano, I enjoyed this wine. 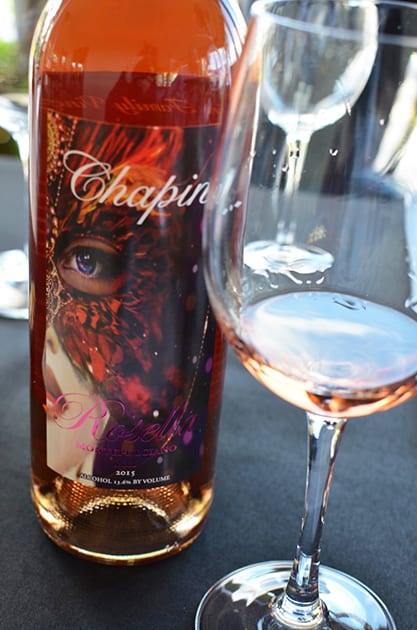 2017 Cabernet Sauvignon: The wine delivered aromas of raspberries, and on the palate, I found a rustic quality. The Cabernet was lighter than most, which I liked. Although fruit-forward, the wine exhibits a soft yet smooth quality with a richness in the mid-palate. The wine displays a good balance. Of the two Cabernets I tasted, I preferred this Cabernet.

2017 Grand Reserve Cabernet Sauvignon: With aromas of Boysenberry, this wine is fuller, more viscous, and appears to deliver more fruit on the palate. The wine is also richer. The label reminded me of a Picasso painting with its colorful interpretation of people drinking wine. 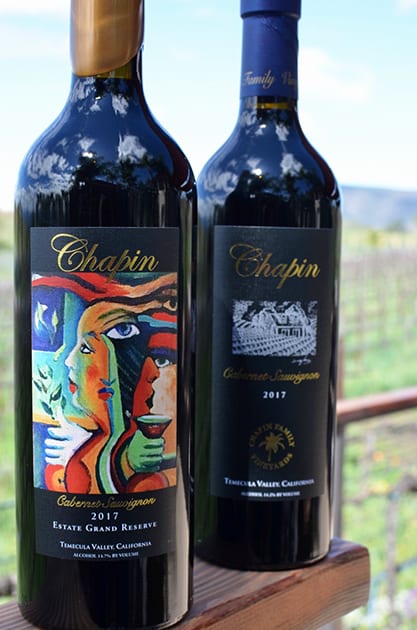 We sample three Syrahs on my visit.

2014 Estate Syrah: This wine delivers sharp aromas of pepper, yet the consistency of the wine is light. I preferred this Syrah to the others.

2015 Estate Syrah: I found a very berry wine that was almost syrupy.

2017 Montepulciano: With savory aromas and lovely perfumes, I found a light balanced wine, another favorite of this tasting. 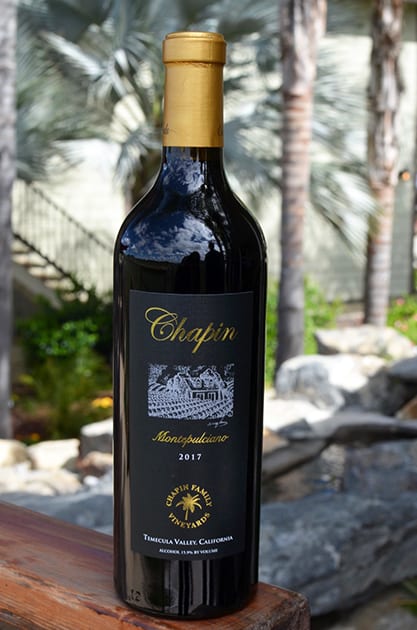 Tasting a vertical of the Aglianico, I especially enjoyed the 2017 and the 2014. I found a fine yet rustic wine with savory raspberry flavors and pretty aromas. The wine is bright and balanced.

Aglianico is one of the wines beside the flagship Cabernet Sauvignon that Chapin Family Vineyards is known for and one of the few wineries in California that grows this grape or produces the variety. 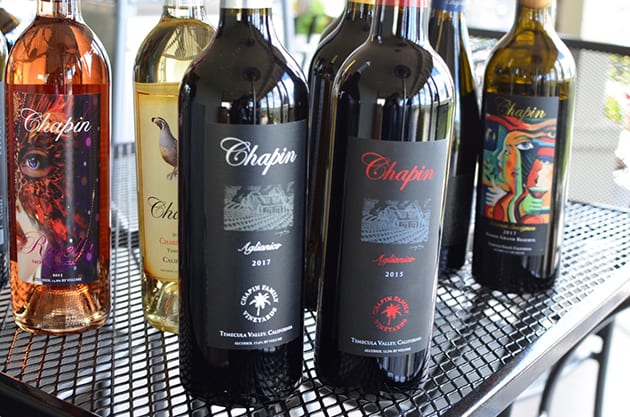 2018 Petite Sirah: I found a bright well-blended wine with dark fruit flavors of blackberry. Oak staves are added to soften this wine.

2015 Zinfandel: The grapes for this wine come from Lodi. I discovered an exceptionally bright drinkable wine with rustic qualities and aromas. The black cherry flavors accented by some white pepper on the finish.

Finally, I left this Temecula winery quite impressed with the quality of wines I discovered at Chapin. Steve’s scientific mind radiates into his passion and ultimately allows him to create some magnificent wines that can rate up there with wines from other California AVAS.