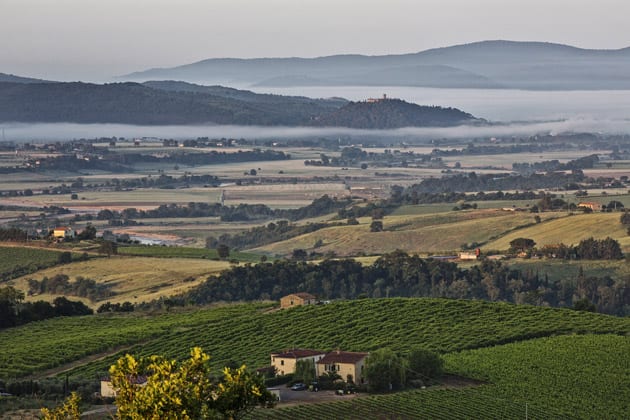 The saying “beauty is in the eye of the beholder” aptly fits the Terenzi winery. Beauty has been part of the Terenzi legacy for some time. It began with cosmetics and eventually turned into the beauty of the land the family owns near Scansano in Maremma. It is also the beauty of the grapes and the wines that are created from those grapes, most noteworthy, the Morellino Di Scansano.

Though the concentration is on winemaking, the Terenzi family also emphasizes the social beauty wine brings forth in people. Their property, in addition to winery features a boutique hotel and wine resort. The Wine Shop and tasting room reminds me of  a cozy living room where people come together to share conversation over a glass of wine.

Although the winery is young, the history of the Terenzi family dates back to the Romans. In the 20th century, the family lived in Arcevia, a city in the Marche region. In 1954 Balbino Terenzi decided to move to Milan, where he opened a chain of gas stations.

Balbino’s son, Florio, chose to take a different career path and worked for Unipro, an association of several Italian companies involved with beauty, personal care, and cosmetics. Later he launched his own company Cosmoprof, which runs fairs for professionals in the cosmetic industry in Italy.

While on a business trip to Tokyo, he learned that in Japan, wine signifies Italy, and he wanted to be a part of that representation. Hence the idea of establishing a winery came to fruition. The winery began in 2001 and today the estate consists of 60 hectares of vineyards and 14 hectares are olive groves.

Currently, Florio’s three children, Federico, Balbino, and Francesca, run the winery and estate. Federico handles sales and customer relations while Balbino runs the administration and production. Finally, Francesca is responsible for running the wine resort and all hospitality.

A warm and rustic atmosphere welcomes you to Terenzi. The resort consists of three charmingly renovated country farmhouses. The rooms are cozy and comfortable. My room featured a double bed and beamed wood ceilings. The accommodations include a pool with a panoramic view of the hills of Maremma.

Feel right at home as you sample the wines of Terenzi. The tasting room, an open floor plan reminiscent of many hillside homes in Hollywood Hills, especially those opening up a patio or veranda with a spectacular view.  As a result Terenzi’s view encompasses the vineyards and magnificent landscape of the rolling hills of Maremma.

Our group was treated to a delicious Tuscan meal accompanied by the Terenzi wines. We were also served a very inviting breakfast with an array of marvelous looking pastries. Typically the kitchen is open daily for lunch serving very traditional and local cuisine from the area.

The winery was built in 2004 and houses state of the art technology. Terenzi’s first vintage was in 2007. The winery boasts receiving from the Gambero Rosso a Tre Bicchieri award the first year they released their Morellino di Scansano.

Everything about Terenzi is based on a youthful, modern approach while still maintaining some of the old world traditions. As evidence of this concept, many red wines Terenzi produces mature in stainless steel tanks.

During our dinner, we sampled most of the wines offered by Terenzi. The winery produces eight wines, five reds, two whites, and a Passito made from Petit Manseng. Terenzi’s product line includes Grappa, one from Viognier, and the other from Morellino Di Scansano.

Montedonico Bianco Da Uve Viognier: An unexpected surprise being this was the only Viognier sampled during my excursion. Montedonico means the place of the vineyards and an ideal name for an unusual varietal in Tuscany. The wine presented nice acidity and minerality with citrus, floral, and honey flavors.

Terenzi Morellino Di Scansano: A fragrant and bright wine with flavors of cherry and hints of dried herbs. This wine ages in stainless steel.

Madrechiesa Morellino di Scansano Riserva: Madre Chiesa means mother church in Italian. Being this wine comes from an older vineyard of that name, it is more complex. The wine ages 12 months in Slovenian oak and another year in bottle. The aromas are dried herbs, which also accent in the flavor.

Francesca Romana Maremma Toscana: Named after the sister, who runs hospitality, this wine is Terenzi’s version of Bordeaux Blend and combines Sangiovese, Merlot and Cabernet Sauvignon. The wine is full-bodied with ripe fruit and a spicy finish.

Bramaluce Maremma Toscana: For Terenzi, Bramaluce means a fantasy connected to life and shows the family’s creativity and prowess in making wine. The wine, blend of Sangiovese and Syrah is rich, round and fruity. This wine ages for 6 months in stainless steel tanks.

Terenzi’s beauty comes in many shapes, including family traditions, winemaking, and its location.  The family may be young to the wine business, but through its determination and the beauty of the wines produced, there will be a legacy for generations to come.

Read more articles by Cori Solomon on Italy and its wineries:

Find Enchantment in Umbria at the Roccafiori Winery and Resort

Colli Euganei: Discovering the Wines of the Venetian Hills