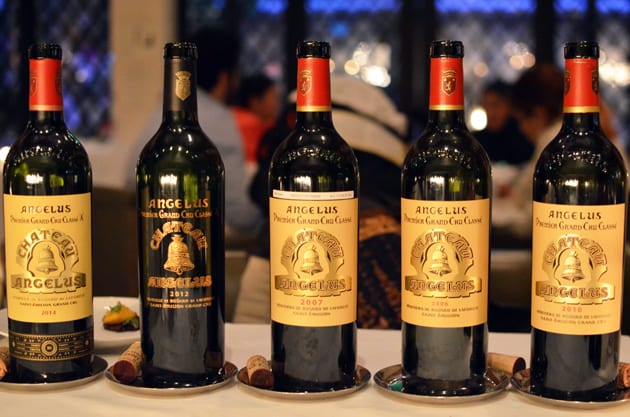 They say the bells toll three times a day; morning, midday, and night, symbolizing the beginning and end of the workday and calling people to pray in what is known as the Angelus prayer. The story goes on to say that the chimes could be heard in the vineyards from the neighboring church. Presently this bell symbolizes Château Angélus. Today that bell tolls in the eighth generation of the Boüard de Laforest family in Saint-Émilion. It rings in the devotion that Stéphanie de Boüard-Rivoal has for creating the marvelous Bordeaux wines that have stood the strength of time.

While the bells currently toll in the eighth generation, one day, it will be announcing the ninth generation, the children who will carry forth the devotion and passion that makes Château Angélus’ wine spectacular.

The history of Château Angélus dates back to 1544 with Georges Boüard, a Bourgeois and Jurat in the city of Bourdeaux. In 1782 Jean De Boüard de La Forest, a King’s bodyguard, settled in Saint-Émilion. His daughter Sophie De Boüard de La Forest married Charles Souffrain de Lavergne in 1795 and moved to the Mazerat Estate of her husband.

The estate vineyard covers 39 hectares. The vineyards are situated on a south-facing slope at the foot of a hill. The soil consists of clay and limestone. The Merlot is grown in soil with more clay and located on the hill while the Cabernet Franc vines lie in sandy clay-limestone soil at the foot of the hill.

When wines in Saint-Émilion were first classified in 1954, Château Angélus was rated Grand Cru Classé. This high-quality recognition of the wines remains constant throughout the vintages.

Recently I had the opportunity to meet Stéphanie for dinner at the Bel Air Hotel. I had the pleasure of tasting a vertical of Château Angélus Premier Grand Cru Classé. This very special tasting increased my desire to visit Bordeaux, evidence the pealing of the bells in the French countryside, and to learn more about the wines of Château Angélus.

The 2014 represents the 30th vintage of Hubert, Stéphanie’s father. The wine is called L’Indien, the Indian, because of its earthiness and tobacco flavors. This young wine opens up to deliver a very together wine. A 50/50 blend of Merlot and Cabernet Franc, this wine brings out finesse and spice.

2012, called Le Premier, is a very special vintage in many ways. Adorned with a special commemorative label of black and gold that signifies the 230-year celebration of the founding of Château Angélus winery. This vintage is the first to be micro-chipped.  The ID chip lies behind the bell on the label. The 2012 vintage represents Stéphanie’s first year of participating in the making of the wine. This vintage also signifies the first time Château Angélus was awarded the Premier Grand Cru Classé “A.” A superb wine with more body and complexity, which exhibits lots of wonderful spices and pepper. The blend is 55% Merlot and 45% Cabernet Franc.

2010 L’Opulent is just that by far. My favorite of the entire vertical tasting, the wine’s elegant structure, and opulent richness shines through.  The wine is very classical in its style and appears to be more fruit-forward. The wine like the 2012 blends 55% Merlot and 45% Cabernet Franc.

2007 Le Charme can be characterized as a softer Saint-Émilion with smoky and earthy aromas and dark fruit flavors. In this year the Merlot was 62% while there is 38% Cabernet Franc.

2006 Le Bordelais is a very classical wine from the region and represents one of the best years on the right bank of Bordeaux. One finds a very balanced wine with more tannins. At first, the wine seemed a bit austere but grows on you once it opens up. Like 2007 the blend is 62% Merlot and 38% Cabernet Franc.

I am intrigued to sample Château Angélus’ second label, Le Carillon d’Angélus, which in addition to Merlot and Cabernet Franc features Cabernet Sauvignon. Château Angélus’ third label, No. 3 d’Angélus, showcases the younger vines in the vineyard and predominately 85% to 90% of Merlot. Although not the winery’s premium wines, I am sure they, too are exquisite in their own right.

The dedication, passion, and devotion of Château Angélus are prevalent in every aspect of the winery, vineyards and the production of the wine. These wines are very special and exemplify Saint-Émilion and for that matter, Bordeaux. I walked away from this wine tasting, knowing I had the privilege to sample one of the world’s wine treasures.