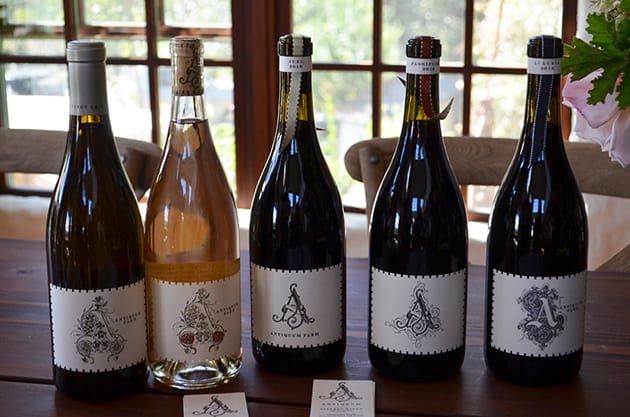 At the southern tip of the Willamette Valley just north of Eugene, Oregon, and west of Junction City, one finds Antiquum Farm, one of Oregon’s hidden gem wineries. The winery hums with life because for Stephen Hagen, the owner, the cycles of life frame his farming philosophy creating a unique vision of sustainable farming and winemaking.

Stephen Hagen’s came from a background of landscape and architecture. The transition from landscaping to growing grapes seems logical and adds another dimension to propagating grapes. His love of nature and the outdoors comes from his upbringing. One important aspect of his farming is the use of livestock and poultry. Sheep and chickens and geese are Stephan’s friends. Draft horses also come into play. They till, cultivate, mow and help plant the cover crops between the vineyard rows. No fertilizers or compost is used, and the grapes are dry farmed. The wines evidence the treatment and care given to the soil.

Stephen is a hands-on man because every step in the vineyard is done by hand. To quote Stephen, “I create wine one cluster at a time.” His wines show his passion for his craft and the process that he utilizes, show off the terroir where his grapes grow.

The Cycles of Life

The cycles of life express the spirit of Antiquum’s wines. The cycles are rest, growth, grazing and root die-off, primarily feeding the soil and creating what Stephan calls an alive soil. In essence, the soil is full of life and therefore the wine evidence the treatment and care given to the soil. These cycles also emphasize Stephan’s focus on the process of growing grapes.

With the help of winemaker, Andrew Bandy-Smith Antiquum’s wine showcase Stephen’s passion, zeal and interpretation for his wine. The wines are lively and abound with life.

Stephen divides his vineyards into two, the big and little field. Each has its own soils type. The big field is made up of bell pine soil, which consists of ancient marine sandstone capped by the lava flows prior that occurred on the ocean floor. The soils in this location are at one of the highest elevations and also the thinnest depth for sites in Oregon. On this site, Antiquum grows its Pinot Noir. Unlike most Pinot Noir, the vines grow rigidly upright similar to Riesling. In the little field mostly Pinot Gris grows. Here the soils are deeper and contain streambed cobble rock.

The name Antiquum means things of olden times, old custom or habit. This term is befitting because Stephen utilizes some of the old farming habits and customs. Although the wine is lively, there is a sense of time and legacy both knowing the story of this winery and as one sips the wine.

Stephen and his wife, Nikki have two children Daisy and Juel, who help with the farm chores of the horses and poultry. Two of their wines are named after their children.

During my visit, we sampled five wines from Antiquum, two Pinot Gris and three Pinot Noirs.

The 2017 Antquum Daisy Pinot Gris is named for Stephan’s daughter Daisy. The wine is aptly named due to all the florals one finds both on the nose and in the palate. The wine ferments in 50% stainless steel and 50% neutral French oak. It ages five months on the lees. Besides the florals, I found crisp acidity and minerality, citrus and pear. The wine exhibits a lot of texture.

Antiquum 2017 Aurosa Pinot Gris reminds me of a Ramato, the Italian version of a Rosé of Pinot Grigio, where the grapes macerate on their skins, allowing some of the color to bleed through into the wine. In this case, the Pinot Gris the grapes received more sun exposure and increased hang time with the idea that it increased the skin thickness, tannin, and aromatic qualities. After gently crushing the grapes spend 36 hours on their skins before barrel fermenting.  The wine then sits on the lees for five months. The result is a wine with floral components accented citrus and almonds.

The 2016 Antiquum Juel Pinot Noir was my favorite. I consider the wine a jewel of Pinot Noir and Stephen’s signature blend of the grapes grown like Riesling. Six Pinot Clones make up this wine, Pommard, Wadensville, 777, 667, 115 and 113. The wine ferments on native and cultured yeasts and then aged in 40% New French oak for 11 months. I found this Pinot Noir to have a lot of character and complexity yet the wine is fresh and lively.

The 2016 Antiquum Luxuria Pinot Noir consists of clones 777 and Pommard and ages in 68% new French Oak for 11 months. I considered Luxuria the biggest most full-bodied from Antiquum, which is partially due to the more significant amount of aging in new oak. It also comes the sites deeper soils which gives the wine more depth.

A visit to Antiquum is about farming and the methods utilized. One can definitely say terroir defines Antiquum wines.