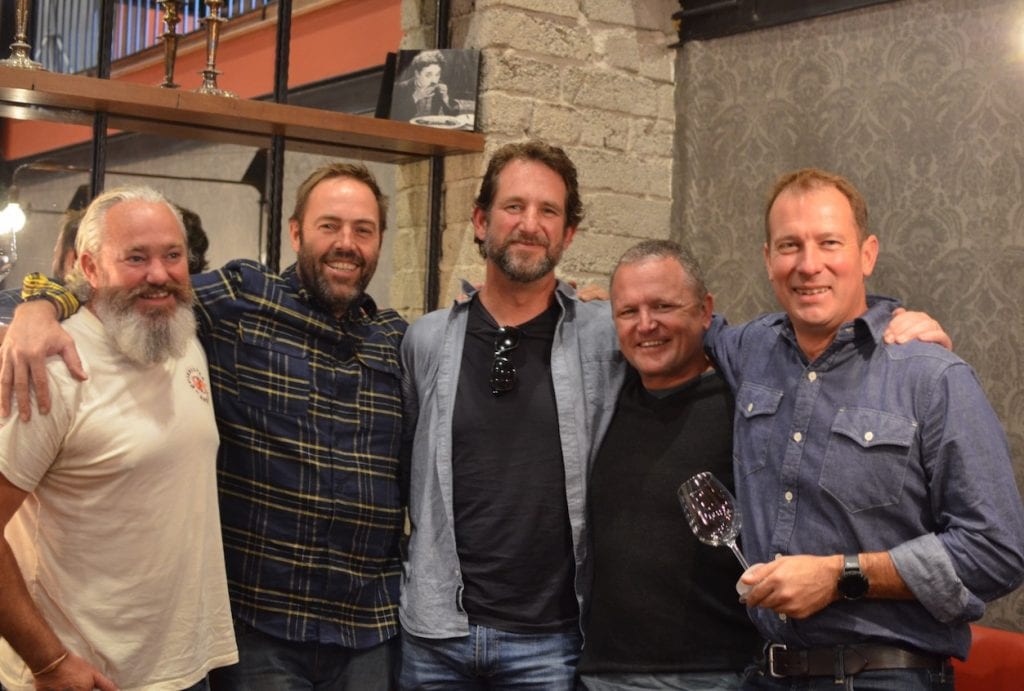 South Africa’s wine history goes back almost 400 years. The area along the coast is known as the Cape of Storms, a befitting name because of the turmoil that has ravaged politics over the years. The political climate has interrupted the story many times as the Dutch, French, and English fought over control of the area.

Wine politics played a different role in the 1950s, 1960s, and 1970s because the South African wine industry was moving from a bulk wine mentality as the movement to define its distinct style grew. At that time most of the red vines were pulled out of the vineyards. The white varieties remained because distilleries utilized those grapes. Today many of those white varietal vines are very old and give the whites wines of the region their character, high acidity, and texture.

Currently, 750 wine producers in South African making terroir-driven wine. The South African winemakers each emphasizes what they feel is the best site, spot within a vineyard, and the ultimate variety that can grow in that location.

All five South African winemakers studied wine between 1992 and 1998. Today they make what they call a farm to table style of wine.

Adi Badenhorst: His pedigree is quite extensive and he studied at Elsenburg, the first agriculture college in South Africa. He continued his career by working in France with Chateau Angelus and Alain Graillot, Wither Hills in New Zealand in addition to many local wineries in South Africa. In 2008 he purchased a 148 -acres in Paardeberg and started A. A. Badenhorst in the region of Swartland. Adi’s philosophy promotes natural wines created in a traditional style. His vineyard practices include dry farming.

Sebastian Beaumont: After graduating from Elsenburg, Sebastian went to work on his family’s winery in Bot River, a part of Walker Bay. The winery is the oldest in the region because it dates back to the 1700s when the Dutch East Indies Company owned the property. The Beaumont family purchased the winery in 1974 and produced their first wine in 1994. The estate is known for producing Chenin Blanc.

Abrie Beeslaar: Abrie is best known for his take on creating Pinotage. It is one that makes this wine stand out. He is the winemaker at Kanonkop Estate and also started his own label Beeslaar. Both are located in the Stellenbosch region. Kanonkop got its name from Kopje which refers to the hill where a cannon fired in the 17th century to announce to the farmers that ships entered Table Bay. Kanonokop was one of the first vineyards to plant Pinotage in the 1940s and with Abrie winemaking techniques has helped make a name for this variety.

Graham Weerts: Graham’s love and forte in wine is Chardonnay. He aims to explore high elevation vineyards and place South African Chardonnay in the ranks with those in California and other parts of the world. Graham does this as a winemaker at Capensis in the Western Cape. Capensis means from the Cape in Latin using grapes from Stellenbosch, Robertson, and Overberg.

Eben Sadie: Eben’s passion for winemaking has helped make a name for the Swartland wine region. Eben founded The Sadie Family Wines in 1999. Their first vintage was in 2000. Eben’s approach is to use minimal intervention, letting the character speak of the place.

The tasting brought together not just the wines of these five South African winemakers but those of about 11 wineries. Here are some of my favorites from both the tasting and masterclass. In the case of this masterclass, we started with the reds and moved to the whites. In South Africa, because of the age of the white vines, they are older and more character-driven. I too will do the same in this article.

A.A. Badenhorst Ramnasgras 2017 Cinsault, Swartland. Aged 12 months in Foudre. I found a wine with a light texture. The wine grew on me with its cedar aroma and bright spice. It makes for a great summer wine.

Beeslaar Pinotage 2016 from the Stellenbosch region is by far the best Pinotage I have ever sampled. The wine ages 19mos in French and American oak. The Pinotage grape ripens early and are picked at a high PH. I found a velvety wine with bright structure. Although a big wine one will note the exceptional balance of this wine.

Boekenhoutskloof Syrah 2015 Swartland presents itself as a soft subtle Syrah with hints of white pepper.

Porseleinberg Syrah is another smoothly balanced Syrah with subtle nuances.

Beaumont Family Wines Hope Marguerite 2018 features an elegantly complex Chenin Blanc with lots of layers and textures. I found aromas of honey and brioche and on the palate a fresh wine with nice acidity.

The Sadie Family Wines 2016 Palladius represents an appellation driven wine. It features 11 varieties from the Swartland region. Those include Chenin Blanc, Grenache Blanc, Marsanne, Colombar, Palomino, Semillon, Roussanne, Verdelho, Clairette Blanche, and Viognier. The wine displays citrus aromas and, on the palate, tropical fruit and minerals. The wine ages 12 months in Amphorae, concrete eggs, and then racked into old foudres for another 12 months of aging. This wine was my favorite of all the whites sampled.

Note: Common to the wine industry, this writer was hosted to the wine sampled from these South African Winemakers. While it has not influenced this review, the writer believes in full disclosure.