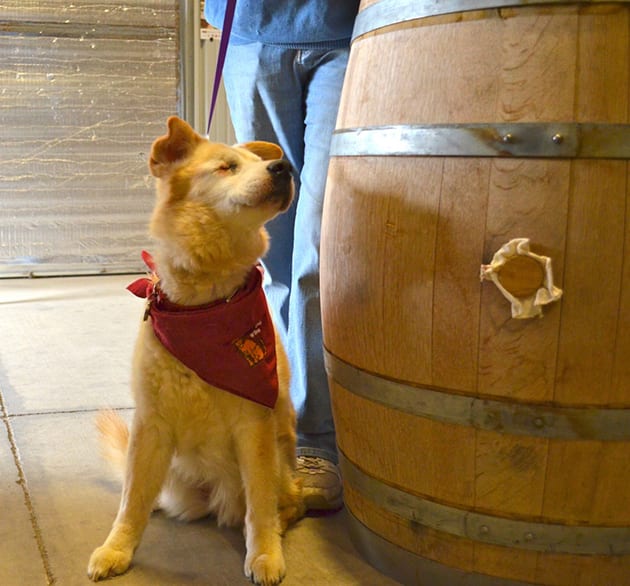 Every once in a while I come upon a story that is so inspiring and moving, it really resonates with me.  Such is the case when I was visiting Ecluse Winery and met Toby, a blind dog that is the inspiration for the winery’s second label, Blind Dog Wines.

It is not the wine, but Toby that reaches out and engulfs you with her true spirit. Toby was a guide dog helping her human companion, Duane Robertson, through life, and as she reached her senior years, she herself needed the assistance of humans to give her what she bestowed onto others.  She touched the lives of many who visited the winery as you watched her smile, showing you that she was a very happy little girl.

When Steve and Pam Lock purchased Ecluse Winery in 1997, Duane was the caretaker on the property.  He had mild Cerebral Palsy, which affected his hearing and speech.  He was deaf and needed the assistance of a hearing dog to help him get around the vineyard.

At that time, he had a dog named Bingo, who, due to glaucoma, was blind yet acted as Duane’s ears by alerting him to sounds.  Alternatively, Duane was Bingo’s eyes.  As Bingo grew older, it became necessary to find another dog to assist Duane.  Pam and Steve discovered Dogs for Deaf in Oregon.  This organization rescues dogs from shelters and trains them to become assist dogs for those with hearing disabilities.

In 1998 Duane was matched with a lab/terrier mix, who was then called Topaz.  Topaz became Toby because it was easier for Duane to say.   Not only was she Duane’s assist dog, but she also became the winery dog.

When Duane and Toby first met, it was love at first sight.  They connected immediately.  Toby’s alerts increased Duane’s awareness of his environment.  Toby did this through signals such as jumping on his knee or pushing at him when the phone would ring, or someone was knocking at the door.  Her easygoing presence made it easy for Duane to bond with her.  Actually her temperament made it easy for everyone to connect to her.  This quality also made her a great ambassador for the winery.  She always exuded an aura of look at me; see what a happy little girl I am.

Duane was so taken with Toby and the gift that Dogs for Deaf gave him; he would do fundraisers for this non-profit organization.

Duane passed away in 2006.  Up until that time, Toby was Duane’s constant companion.  She would even sit with him in the wheelchair as he became frailer.

Shortly after his death, Toby developed diabetes.  Soon after she began to have a vision issue in one eye.  Her retina enlarged and then the lens detached, and she soon became blind in that eye.  This did not stop her.  Her spirit did not change; she was still the same spunky dog she had always been.  Not long after she became blind in one eye, her other eye began to deteriorate.  This, too did not deter this dog.  She continued learning to adapt to her environment, even with the handicaps life had given her.

Toby’s tenacity showed us that an animal could adapt to a handicap faster than a human. With their happy go lucky spirit; knowing their human counterpart loves them, they move forward with whatever is handed to them.  In this case, Toby learned to accept her surroundings without her sight.  You could see on her face that she was happy, greeting everyone with her doggie smile.  She was content. For Toby the impairment became a gift.

One-thing humans can discover from dogs like Toby is you can endure even when life presents challenges and obstacles beyond your control that you do not think you can beat.

Toby’s company graced the winery for almost 16 years.  She passed over the Rainbow Bridge this past July.  She was 17-years old as Pam Lock owner of Ecluse says, “She was such a little light around here – still a puppy at heart it seemed!”  Her presence will permeate the winery forever and will live on in the hearts of everyone she touched during the time she held court at Ecluse Winery.  Her handicap became a gift that bestowed itself on all those that met Toby.

“A very sad day here at Ecluse as we lost our little Toby yesterday. As you know, she was a real light here at Ecluse – always happy and with her wagging tail was never deterred by her handicap. Having just celebrated her 17th birthday, she will always be with us in spirit, and through her legacy Blind Dog Wines. We hope you will lift a glass in her honor tonight and remember her words to live by

Perhaps we should all lift a glass of Ecluse’s Blind Dog Wine or your favorite wine, giving a toast to Toby and the dogs like her that give our life more meaning.