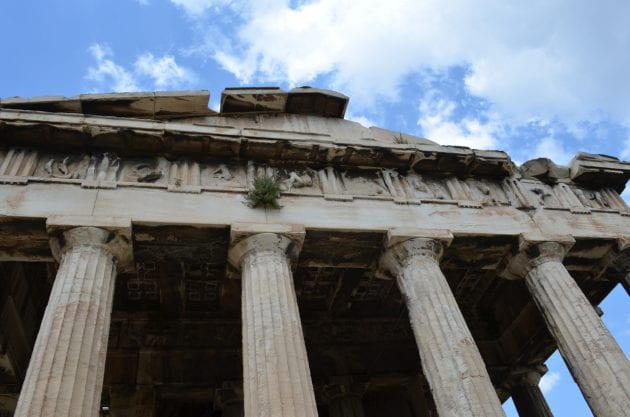 Touring Athens Greece is a must for any traveler.  Even on a Sunday, you can feel the bustle of energy in this city. There is an underlying aura that goes back to ancient times.  One feels the cradle of civilization all around you, and it starts at the top of the hills overlooking Athens, the Acropolis and goes beyond to the sea where the tranquil beauty of the landscape brings you to present day.

The magnificent massive columns adorn these hills and the skies above giving tribute to the gods.  One can only imagine the labor that went into achieving the magnitude of these structures.  The vigorous hike up to these relics evokes a sense of time and place.

Walking the grounds of the new Acropolis Museum one observes the recent excavations and marvels at what other treasures might lie beneath the nearby grounds to be discovered.

Below the Acropolis lies the colorful markets and plazas filled with restaurants and trinkets.  Yes it is a bit touristy, but it is fun to sit outdoors over lunch enjoying the musings of humanity today; definitely juxtaposition to the relics that lurch above.

Upon completion of a trek to the Acropolis, one can enjoy a tour of the city by Best Travel.   From the watching of the hourly maturations of the guards in front of the government building to a short but strenuous hike up to one of the hilltop churches, St George on Lykavittos Hill that offers a spectacular view of the city, to the beauty of Vouliagmeni Lake and its surrounding coastal marinas of the Athenian Riviera, one gets a glimpse of the diversity of experiences Athens has to offer.

Like the views at the Acropolis, the panoramic vista from the top of Lykavittos Hill is different and more spectacular if you can handle the trek to the top.  From the observation platform, the view reaches to the Piraeus and Saronic Gulf and includes the Acropolis, the Temple of Zeus, the Panathenaic Stadium, and the Parliament Building.  There also is a café at the top where you can also enjoy these impressive panoramas.

Vouliagmeni is a seaside village south of Athens that sits at the foot of the Hymettus Mountains.  Nearby lies the natural phenomena, a small lake that maintains a constant temperature year long. Its creation occurred when a cavern collapsed after an earthquake in the middle ages.  The lake combines sea and freshwater and is surrounded by beautiful rock formations and underground caves.  Even if you do not enter the lake, one can feel the regenerative powers of these waters.  This location is a special place, open all year round for swimming, diving, or simply to enjoy its natural beauty.

You might want to end your day’s journey with a glass of Greek wine at the Margi, a luxury hotel on the coast by Vouliagmeni Lake.  Consider sitting poolside sipping a glass of Gaia 14-18 H Rosé.  This Rosé made from the Agiorgiortiko grape has an amazing complexity, which is not usually found in a Rosé.  Its depth, minerality, and flavors of stone fruit and cherry are intriguing.   The wine is an excellent example of what the Nemea region of the Peloponnese has to offer.

The Margi is a hotel that definitely should be on your list of places to return for an extended stay.  The tranquil setting and the beautiful architectural décor are all inviting for a visit to the Athenian Riviera.   The hotel and its concept began in the 1960s when the idea emerged to develop a kind of French version of the Côté d’Azur along the Saronic Coast.  Along came Doctor Yancos, who shared this vision and founded of The Margi, a hotel named after his two daughters.  Built as a group of matchbook apartments and expanded over the years.

Today The Margi hotel also features The Farm, where fresh produce grows for executive chef Panagiotis Giakalis to use in his culinary cuisines at the hotel’s restaurant.  It is taking the farm to table one step further by utilizing the hotel’s own farm both organically and sustainably.  Large groups can visit the Farm and experience first hand a tour of the garden, visit the animal houses, a presentation, and food demonstration followed by an outdoor meal at the Farm.

While in Athens consider staying at the Athens Ledra Hotel, a pleasant, modest upscale luxury European style hotel.  It’s worth dining at the hotel’s rooftop restaurant, Panorama on your first night, as the magnificent views of the city and the Acropolis are breathtaking.

There is something magical about seeing the Acropolis lit up at night.  Perhaps it signifies the ancient history and mysteries of a bygone era.  Whatever it is, being able to view this majestic structure with its golden hues glowing in the night sky is a welcoming sight on one’s first day.

In Athens Greece, the past intertwines with the present perhaps bringing full circle the impact human beings have had on this earth.

This article will be the first of a series about my journeys in Greece with a focus on discovering the wines and the ancient Greek varietals.  I welcome you to follow this excursion over the next several weeks.

Note: Common to the wine industry, this writer was hosted to the wine sampled and hired care touring Athens Greece. While it has not influenced this review, the writer believes in full disclosure.