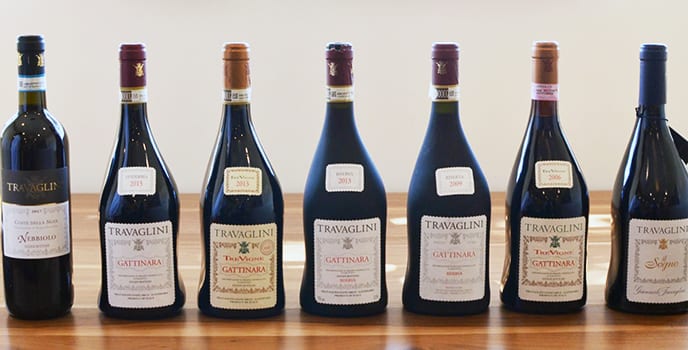 Often there is something besides the wine that attracts us to a particular winery. As I sit and reminisce about tastings in the past, I think about when Cinzia and Alessia Travaglini were in Los Angeles for a tasting of the family’s Nebbiolo wine. It was the unique bottle shape that stood out to beckon one to taste the wine and discover the Travaglini Gattinara story.

Now in its 5th generation with a mother-daughter team at the helm, this winery’s story began in the 1920s when Clemente Travaglini decided to establish a winery in the Piedmont area of Italy, known as Gattinara. Gattinara is now the heart Nebbiolo country. It was Clemente who envisioned taking the property that had been in the family since the 19th century and creating a winery to produce Nebbiolo. This vision paid off.

Clemente handed the reins down to Arturo in 1958, who was followed by his son Giancarlo. It was in 1958 that the winery’s most extensive innovations came to light. Giancarlo created the foundation for running this winery today. He is also the genius behind the unique bottle that brands Travaglini Nebbiolo from others. Giancarlo’s daughter, Cinzia, currently oversees the estate along with her daughter Alessia while she prepares for her future with the winery. Cinzia’s husband, Massimo Collauto, is the chief winemaker.

Gattinara And Its DOCG

Gattinara is located near the foothills of the Monte Rosa Range, mountains situated in the eastern portion of the Alps along the border of Italy and Switzerland.  The soil composition consists of light granite with extremely high iron content, similar to the Alps. These rocky soils give the wine its acidity due to the low levels of calcium carbonate and magnesium.  The soils also lack Calcium. The outcome is wine with high acidity, firm, soft tannins, minerality as well as complexity.

The family owns 146 acres, of which 128 are planted with primarily Nebbiolo. About 50% of the vines planted fall within the Gattinara DOCG. Vines range from 6 – 60 years old. Besides Nebbiolo, a small percentage of the vineyard is planted with Vespolina and Uva Rara, indigenous grapes used in Travaglini’s Cinzia wine.

The Gattinara DOCG earned its accreditation in 1990 after being a DOC since 1967. As part of the DOCG regulations, 90% of the wine must contain Nebbiolo, with the other 10% being Bonarda di Gattinara or 4% Vesponlina. The wine ages a minimum of 2 years in barrel and three years if a Reserva followed by two years aging in bottle.

Also known as Spanna, this grape produces clusters that, although compact, they are loose too. The color is light red and covered with white pollen. The grapes produce tannic wines when they are young and require aging to balance those tannins. The wine is dry with bright red color, clear and light, and often considered austere.

In 1958 Giancarlo Travaglini designed the unique bottle shape that today brands the Travaglini wines. Like a sculptured work of art, the bottle is designed to capture the sediment while pouring the wine. This design allows for the wine to be served directly from the bottle without decanting. The dark glass prevents light from coming through, thereby reducing the possibility of light tainting the quality. For a left-handed person, the design makes pouring easier. The shape reminds one of a modern art sculpture of a woman. There is a seductive quality that reflects in the wine.

The Travaglini luncheon was held at Angelini Osteria in West Hollywood. Here we sampled eight of the Travaglini wines.

Nebolè 2013. I had never tasted a sparkling wine created from Nebbiolo. Tips of the Nebbiolo grape clusters are hand-harvested and vinified into a white wine before the second fermentation in the bottle. The process utilized the classical method for creating sparkling wine. The wine matures on the lees for at least 46 months. I found a fun, bright, sparkling wine with notes of citrus.

Gattinara DOCG 2015: This wine ferments in stainless steel and then ages for two years in used Slavonian oak casks before aging for one year in the bottle. On the nose, you get a sense that this wine is more complex. Flavors of tomatoes and baking spice accentuate this wine.

Gattinara Tre Vigne DOCG 2013: Tre Vigne blends three single-vineyard “cru” sites on the Travaglini Estate. After fermenting in stainless steel, the wine ages four years in Slavonian oak casks. During the finale year of aging, 20% of the wine is removed and placed in barrels to age separately, after which the wine is returned and blended with the rest of the balance of the wine. The wine then ages ten months in bottle. The wine delivers a brightness that accentuates the olive aromas and flavors of tomatoes. This wine projects flavors of the Mediterranean.

Gattinara Tre Vigne DOCG 2006: This Tre Vigne received the same process as its counterpart in 2013. Again it reminded me of wines from the Mediterranean, especially some from the Naoussa region of Greece.

Gattinara Riserva DOCG 2013: This wine utilizes grapes for the best parcels containing the oldest vineyards on the estate. After stainless steel fermentation, the wine ages three years in the Slavonian oak casks, followed by one year in the bottle. I found a softer, smoother wine and sharper on the nose.

Gattinara Riserva DOCG 2009: With the same processing as 2013, one sees what five years of aging accomplishes by holding onto a wine. My favorite, by far, the wine delivered more depth and complexity.

Il Sogno 2014: Another favorite because I like the soft palate that the wine brings forth. After hand-harvesting, the grapes dry for 100 days in a naturally ventilated storage area. During this time, 50% of the water in the grapes evaporates. After fermenting in stainless steel, the wine aged for 40 months in used Slavonian oak casks, followed by ten months aging in bottle. It Travaglini’s version of an Amarone.

Note: Common to the wine industry, this writer enjoyed a hosted wine tasting luncheon. While it has not influenced this review, the writer believes in full disclosure.