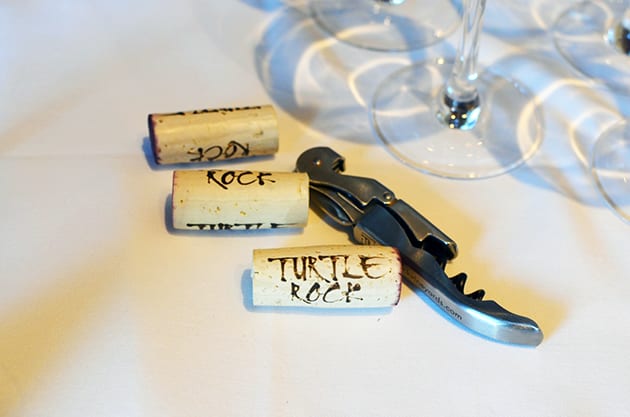 The term “the apple does not fall far from the tree” aptly describes Turtle Rock Vineyards and more specifically winemaker/owner Don Burns. Don grew up on Willow Creek Road in the Templeton Gap of Paso Robles.  After sailing for two years in Central America and a short stint working in the restaurant business in Florida, Don came back to his roots in the Willow Creek  District of Paso, In tow with him were his wife Claudia and daughter Willow.

Willow is a consistent theme in Don’s wines. Many of his sourced grapes come from the Willow Creek District AVA. Don produces a Willow’s Cuvee, a wine named after his daughter. Even his Rhone white blend is called Willow White.

The winery’s name conveys the calcareous limestones rocks found in the Willow district and on the property where Don grew up. From a child’s vantage, their shapes look like a turtle. Therefore the name Turtle Rock came into being.

Turtle Rock wines are distinctive in they are not overpowering like many Paso wines. A consistency in the wines sampled was the subtle demeanor of each wine. Don picks his grapes based on acid balance. I found the wines well-balanced and integrated.

We began our lunch with 2016 Willow White, a combination of Grenache Blanc, Roussanne, Picpoul, and Viognier. The wine ages in 20% new French oak while the remainder aged in Stainless steel and neutral French Oak. This refreshing wine displayed flavors of stone fruit and honeysuckle.

The Willow White paired marvelously with the yummy Harvest Salad with roasted butternut squash, green dragon apple, glazed walnuts, baby kale, feta cheese and a maple-olive dressing. I could have had a meal of this salad.

Our next course paired the 2016 Plum Orchard, a blend of Grenache and Mourvédre with Cast Iron Seared Branzino, toy box summer squash, red plum jam and fennel arugula salad. The label depicts an hourglass filled with sand, which represents the sandy soil of the Plum Orchard Vineyard in the Templeton Gap District. The grapes see 50% whole cluster fermentation ages for 22 months in French oak. The wine exhibits a silky texture with bright fruit, plum, and hints of white pepper. On the nose, I detected baking spice and plum.

Our third course consisted of Turtle Rock’s 2015 Willow’s Cuvee, a blend of Grenache, Syrah, Mourvédre, and Carignon paired with oven roasted duck breast, roasted cauliflower, and port wine glaze. The wine is fruity and bright with a nose of baking spices along with some savory spices. The grapes come from the James Berry, Kruse Vineyard. While the Syrah sees 20% whole cluster fermentation, the Grenache and Mourvédre are co-fermented in concrete. The wine ages 22 months in 50% new and 50% neutral French Oak.

Finally, our last course paired Petite Filet Bing Cherry Red Wine Demi Glaze with truffle potatoes and Turtle Rock’s 2016 G2 Syrah. This wine is a baby and has lots of potential for aging. The flavors of Bing Cherry dominate the wine. This wine received 30% whole cluster fermentation and then ages 22 months in new French Oak. The name G2 not only represents the vineyard the grapes came from but also a type of sailboat. It also signifies the journey Don took on his sailboat through South America before landing in Florida where he met his wife.

The luncheon could not end without an encore of a very special wine club only wine, the 2016 Maturin. Maturin refers to the Steven King dark series which depicts a huge turtle, and in the case of Turtle Rock, it reflects an Angry turtle. The wine consists of Syrah, Graciano, and Grenache. It is the most full-bodied wine in Turtle Rock portfolio. One finds a deeper cooler and a soft, rich wine.

Like the sailboat that brought Don and Claudia together, they are now sailing or continuing the journey through their Turtle Rock wines. You can hop on board and see for yourself the exceptional quality and elegance of Turtle Rock wines.